About a year ago, I switched to the LG ud4379b, a 42.5” 4k IPS monitor. My initial motivation for upgrading was to convert to an IPS panel. However, my selection of monitor was an attempt to simplify my hardware, by pairing down my dual 1080p setup. While I wanted a single monitor, I didn’t want to drop my total resolution because everyone knows that multiple monitors are required to get any real work done, especially programming. Although, after a year of using my massive display, I started to tire from the large display paradox.

Before I dive into what exactly the large display paradox is, lets quickly refresh on what I have said in the past. In my post about choosing the 43” monitor, I went into depth about my history of using dual monitors, and why I wanted to switch to a single monitor:

While I like having the screen real estate of two monitors, I was never able to optimally use them because of the bezels between the monitors. While working, I would naturally shift over and use one monitor as a primary display, and the other as a secondary display.

I wanted to be able to view my monitor straight on, without any bezels getting in the way. I also knew that a single 1080p monitor was just a bit too cramped.

In that same paragraph, I provided an additional reason for the switch. If I had been paying closer attention, I might have noticed it foreshadowing issues I would face with a large display:

This was okay for some tasks, but it usually meant that I just used the primary monitor, and half of the secondary one, because it was too hard to see the far end of the screen. 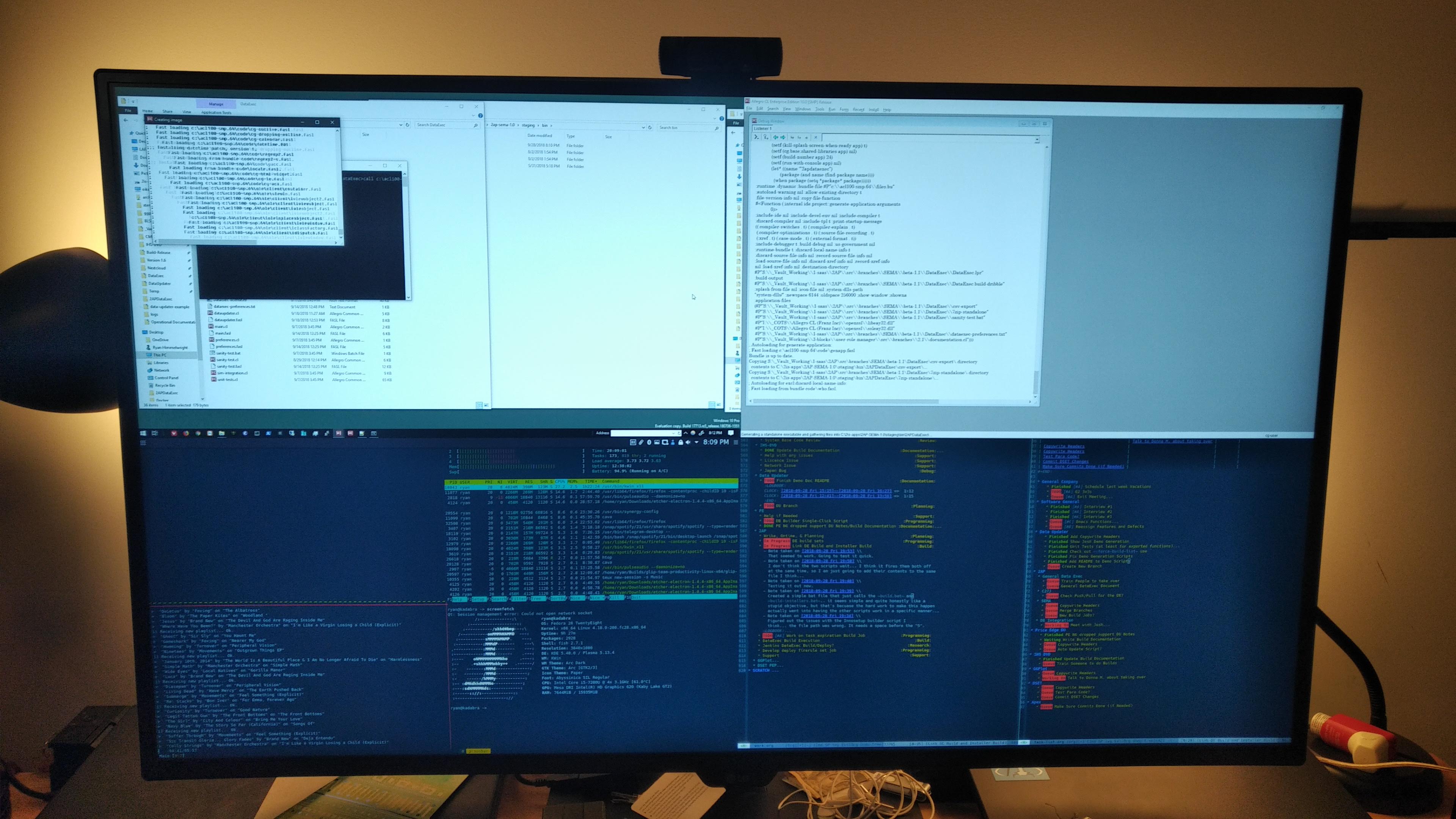 I was aware that a large screen may not be optimal, but the alure of having four monitors in one was too strong. This is emphasized in the section where I compare the LG 43” with a Dell ultrawide:

Being so large, I could still have auxiliary windows opened on either side. One advantage the ud4379 had over the ultra-wide however, was that being a massive 16:9 screen, it could easily be divided into 4 1080p screens.

Despite the nagging voice in the back of my head saying the ultrawide might be more reasonable, or reminding me that a single 27” 1440p monitor was also an option… I ignored it and picked up the 43” LG (which nonetheless, is a great monitor!).

So then. What is the “Large Display Paradox”? As far as I can find, the term was coined by Jeff Atwood in a blog post titled with the same name. In the post, Atwood refers to another post in which Dan Rutter states the following while reviewing his new Dell UltraSharp 3007WFP-HC monitor:

Users of 30-inch monitors face the terrible, terrible problem of how to effectively use all of that space. You don’t often want to maximise a folder or document window on a screen this big; either you’ll end up with a lot of white space and important program buttons separated by a vast expanse of nothing, or you’ll get lines of text 300 or more characters long, which are difficult to read.

Atwood summarizes that this is a perfect example of what he deems to be the Large Display Paradox:

That’s the large display paradox. Having all that space can make you less productive due to all the window manipulation excise you have to deal with to make effective use of it.

He further explains how once a display grows beyond the point of being able to efficiently maximize windows without too much whitespace (above 1600x1200, by his estimates), it becomes less productive due to the user having to continuously manage the windows.

While these posts are on the older side (2007!), I think most people are more likely to experience this issue today, due to cheaper large monitor options.

With the Large Display Paradox finally defined… did I experience it using my 43” monitor? Yes.

At first, it was great. I loved throwing everything I wanted up on a single screen, without any applications overlapping.

In particular, during the first few months using the monitor, I still worked remotely at my previous job and needed to use a Windows machine. I appreciated that I could RDP to my work computer using an ultrawide resolution (3440x1440), but still have extra pixels to keep my notes and chat windows below it. 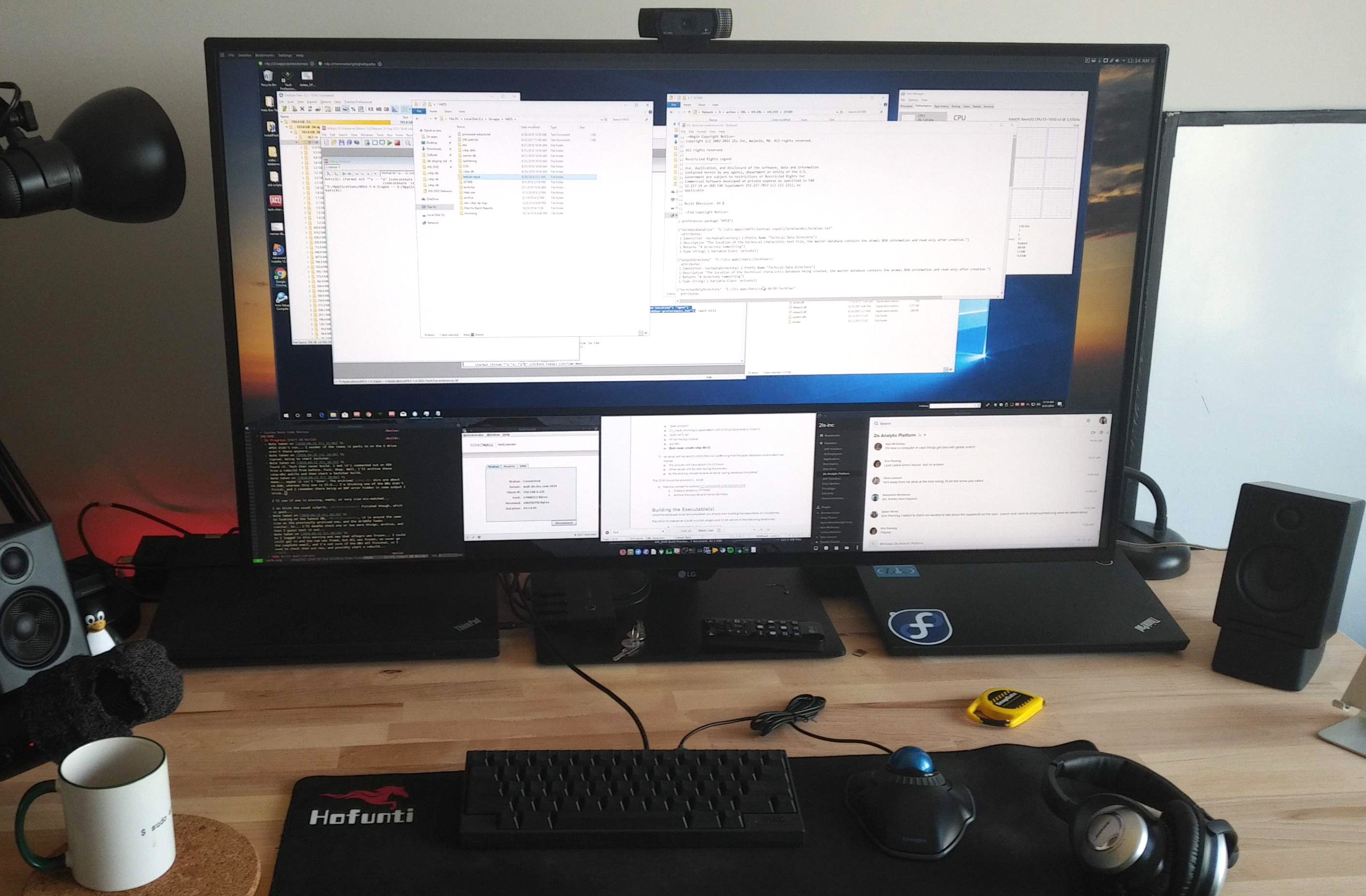 Remoting into my Windows work computer using an ultrawide resolution, and still having space for my notes and chat applications below.

Then, I switched jobs and used Linux 100% for home and work. Instead of having to RDP into a second machine… I could just ssh using a small terminal window. I no longer had to view multiple machine desktops to get work done.

At first, I didn’t notice any issues, especially when using it on my personal computer which I mostly used for leisure anyway. It didn’t matter much if I had a video and chat window next to a personal project I was working on.

Regardless, over time I started to notice that when I tried to actually focus on a task, the “usefulness” of the large screen really started to fall apart. Below are a few issues I started to run up against when trying to be productive with what was seemingly one of “the best productivity monitors on the market”.

Always wanting to fill the space.

The tricky thing about having all that space… is you want to fill it, even if you don’t need to for the task at hand. So for example, if I wanted to work on writing a blog post, all I need is a text editor. In addition, I like to have a preview of the post open in a browser so I can see how it renders. I sometimes like to also have a photo editor and picture folders open, but I find it best if I can have them in a separate virtual workspace. With the large display, I would open up all those windows on the same screen. In reality, having anything beyond my text editor and post preview in front of me, really starts to detract from my ability to focus on writing the post.

With so much space, I felt obligated to fill it with windows unrelated to the task at hand.

People like filling space. How often do you find that a surface in the house seems to always collect random crap? Large monitors are the same. Even when I knew I only needed a one small terminal in from of me… the vast space surrounding it made me feel uneasy. So, I would fill the space by either extending the editor window to a comical size, or litter the surround space with random applications, unrelated to the work I was trying to focus on.

I didn’t use the entire space, just focused on what was in my field of view in front of me.

Even though I felt obligated to fill all the space, I still didn’t use all of it. When I had two monitors, I would center myself on one to prevent looking at bezels, and then usually only utilize half of the secondary monitor, because the far end of it was out of my sight. This didn’t change with a single large monitor. I usually found my self using an “appropriately sized” window, smack in the middle of the screen. If I needed to switch to working in a different application, I would move that application to the center and focus on it. The outer spaces of the monitor were never fully used.

I couldn’t fullscreen (or even split-screen) my windows 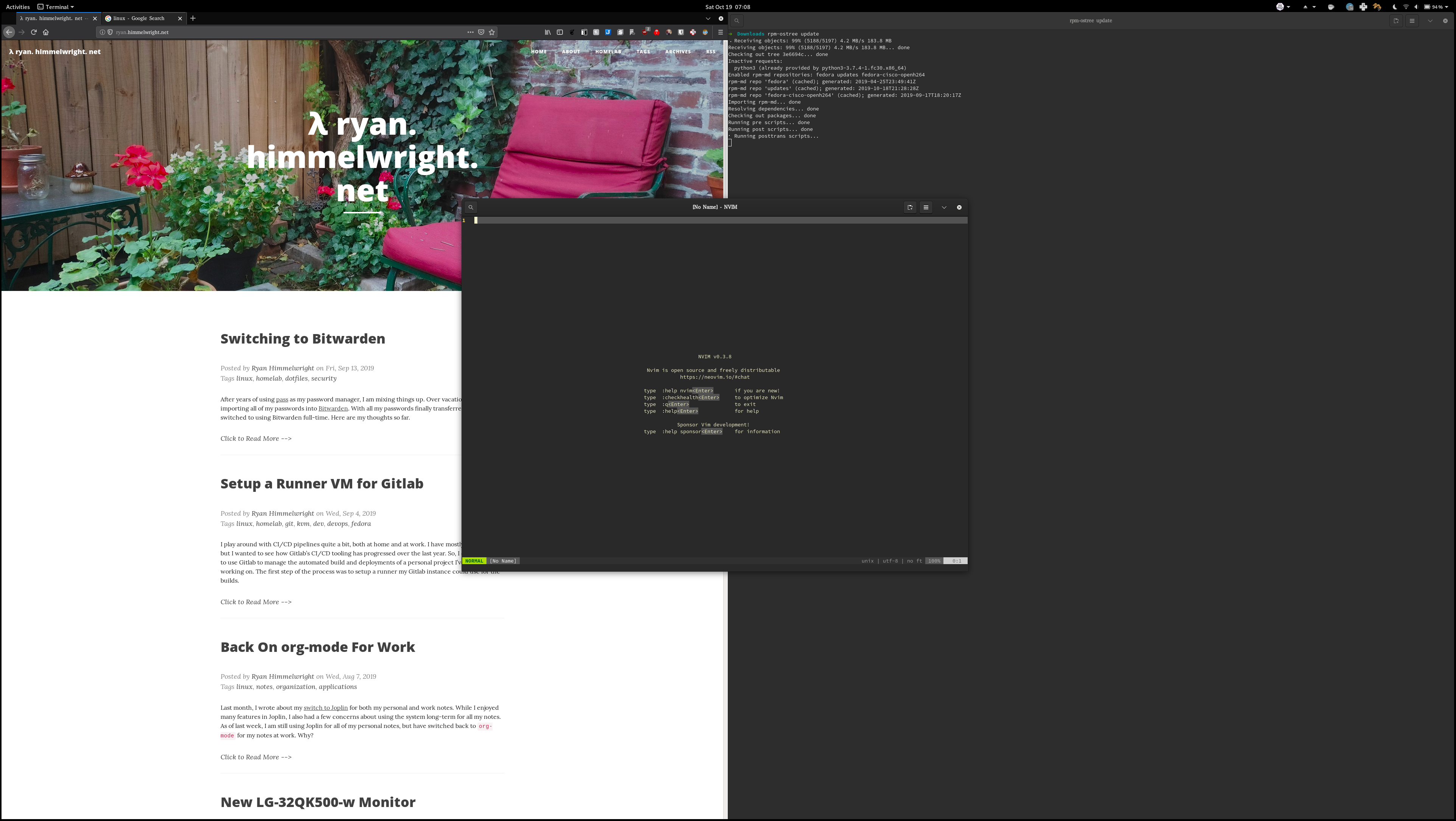 Fullscreen, and even split screen windows were unwieldy. Most of the time I just wanted to work from a normal sized window.

Speaking of focusing on a single application… fullscreen… it isn’t really an option on such a big monitor. While a maximized window might look awesome at first, it wasn’t very practical for day-to-day use. This issue was compounded by the “shadow” that prevented me from seeing the first few characters near the edge of the screen. The size of the screen combined with how far I sat from it, meant that all but the center was out of my field of view. As such, I didn’t maximize my windows, and usually just wanted a normal-sized one in the center.

Without being able to view windows in full or split screen configurations, all of the quick window-snapping key bindings I’ve become accustomed to were useless. I was forced to switch over to my mouse more than I would like to. While some might point to using window management software, or a tiling window manager, I don’t think this would solve my issues. You might be able to get away with using a window manager like i3-gaps (or sway) on a 1440p ultrawide monitor, but a full unscaled 4k space is just too much. Unless you always have 5+ tiled windows open at a time, they’re just too big.

I think the large display paradox could be a real modern tech issue. Well, more accurately, a major first world problem. Given the increased affordability of large displays, what might seem like an great setup, might not actually be optimal for one’s workload. At it’s core, technology is a tool. When choosing tech hardware, we should always focus on what the best tool for the job is, and not just what is the best tool.

All Things Open 2019 Switching to Bitwarden
comments powered by Disqus