A couple months ago I swapped out my dual monitor setup for a single (but massive), 42.5” UHD IPS display. I love it, but admit that sometimes, it has too much workspace. While I still think that the larger display was better choice, I sometimes wish that I had the more limited, but focused workspace of an ultrawide or 1440p monitor. Maybe I still can…

“But Ryan, if you have a great display with such a large resolution, why would you want to intentionally scale it down smaller?!?!?!“.

The truth is, there are a number of occasions when having a single, smaller display is helpful.

First, when trying to focus deeply on a single task, I like to have the windows that I need for the activity opened, and nothing else. Furthermore, I like to have these windows opened at a reasonable size (Note: a full screen 3840x2160 single terminal looks stupid). With such a big screen, it is just too tempting to drag chat windows, monitoring apps, and videos to the sides of the workspace. While 1080p is a little cramped, I think a single 1440p resolution is more ideal for focused work (especially because I tend to take advantage of virtual desktops). 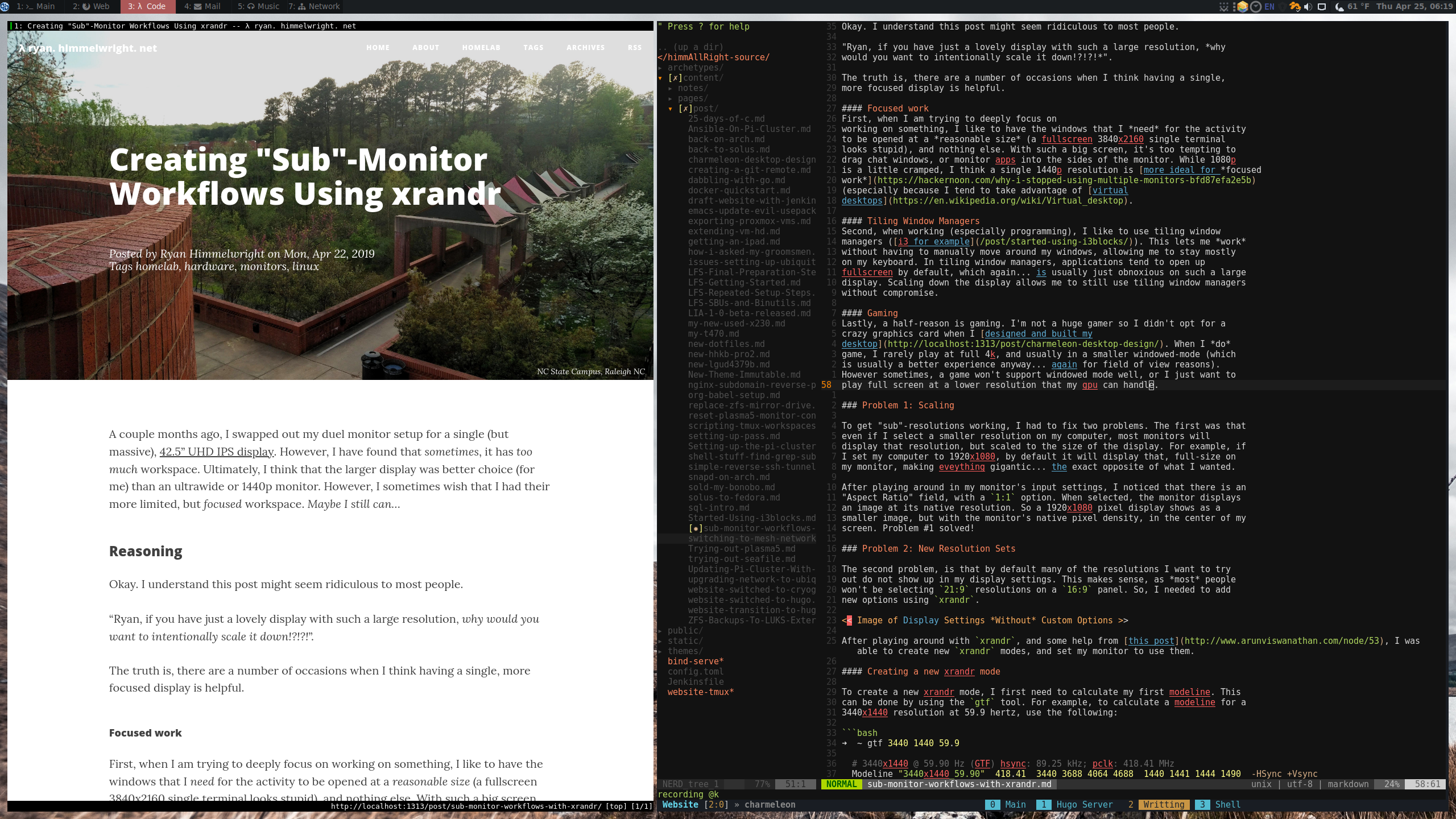 Lastly, a half-reason is gaming. I’m not a huge gamer so I didn’t opt for a crazy graphics card when I designed and built my desktop. When I do game, I usually play in windowed-mode (which is usually a better experience anyway… again for field of view reasons). However, sometimes a game won’t support windowed mode, or I want to play full screen at a lower resolution so that my GPU can handle it.

Now that it is (hopefully) understood why I want to setup a “sub-display” inside my monitor, lets switch to how I did it.

To get “sub”-resolutions working, I had to fix two problems. The first was that even if I select a smaller resolution on my computer, most monitors will display that resolution, but scaled to the size of the display. For example, if I set my computer’s display settings to 1920x1080 on my 3840x2160 monitor, by default it will double up the pixels to get the smaller resolution to fit full-size on the monitor. This makes everything appear gigantic… which is the exact opposite of what I wanted.

After playing around in my monitor’s input settings, I noticed that there is an “Aspect Ratio” field, with a 1:1 option. When selected, the monitor displays an image at its pixel density. So a 1920x1080 pixel display shows as a smaller image in the middle of the screen, but with a 1:1 pixel density. Problem #1 solved!

The second problem was that by default, many of the resolutions I wanted to use out do not show up in the display settings. This makes sense, as most people won’t be selecting 21:9 resolutions on a 16:9 panel. I needed to add new options using xrandr.

After spending sometime in a terminal with xrandr, I was able to create new xrandr modes, and set my monitor to use them.

To create a new xrandr mode, I first needed to calculate a new modeline. This can be done by using the gtf tool. To calculate a modeline for a 3440x1440 resolution at 59.9 hertz for example, use the following:

The line that starts with Modeline (but not including “Modeline”) is what we want. Copy that and give it to xrandr with the --newmode flag to create a new mode:

Lastly, to add that mode to a display, use that same line but with the --addmode flag, and the monitor to switch (DP-1 in my case):

Switching to the new mode

To switch to the new mode, I like to use a GUI tool named arandr. Simply right click on the display’s rectangle, and select the new mode name from the “Resolution” list (Or Outputs -> Monitor Name -> Resolution -> New MODE NAME in the menu bar). 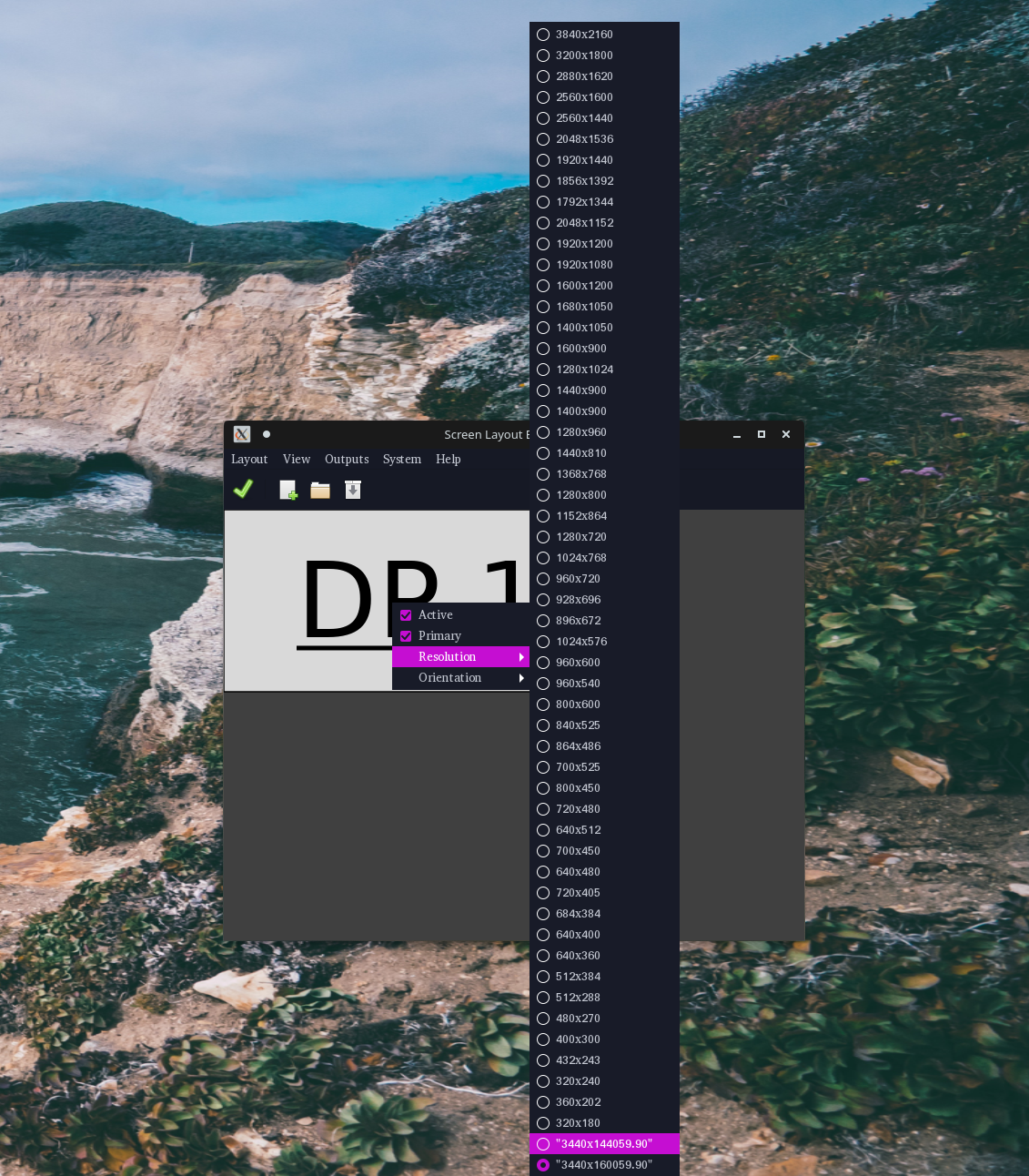 Using arandr to select new mode (SO many resolutions XD )

If you are too 1337 to use a GUI app, never fear! The display can be switched to the new mode using xrandr with the --output and --mode flags:

But Wait, There’s More! Scripting it:

After running these commands twice… I realized it would be easy enough to automate. So I did with this script:

Basically, the script is run by providing it the desired width, height, and xrandr display to apply the new mode to. For example, to create a new 3440x1440 mode for my DP-1 display, I would run the following command:

The script will generate a new mode based on the parameters fed it it, and then check to see if the mode already exists. If it doesn’t, it will create it, add it to the display name passed in, and will ask the user if they would like to switch to the new mode. If the mode was already detected, the script will just ask the user if they wish to switch to it.

Note: The script is hard-coded to always create modes at 59.9 Hertz, because I don’t have any fancy fast monitors. If you want that option, just add another parameter and swap out the 59.9 with it. 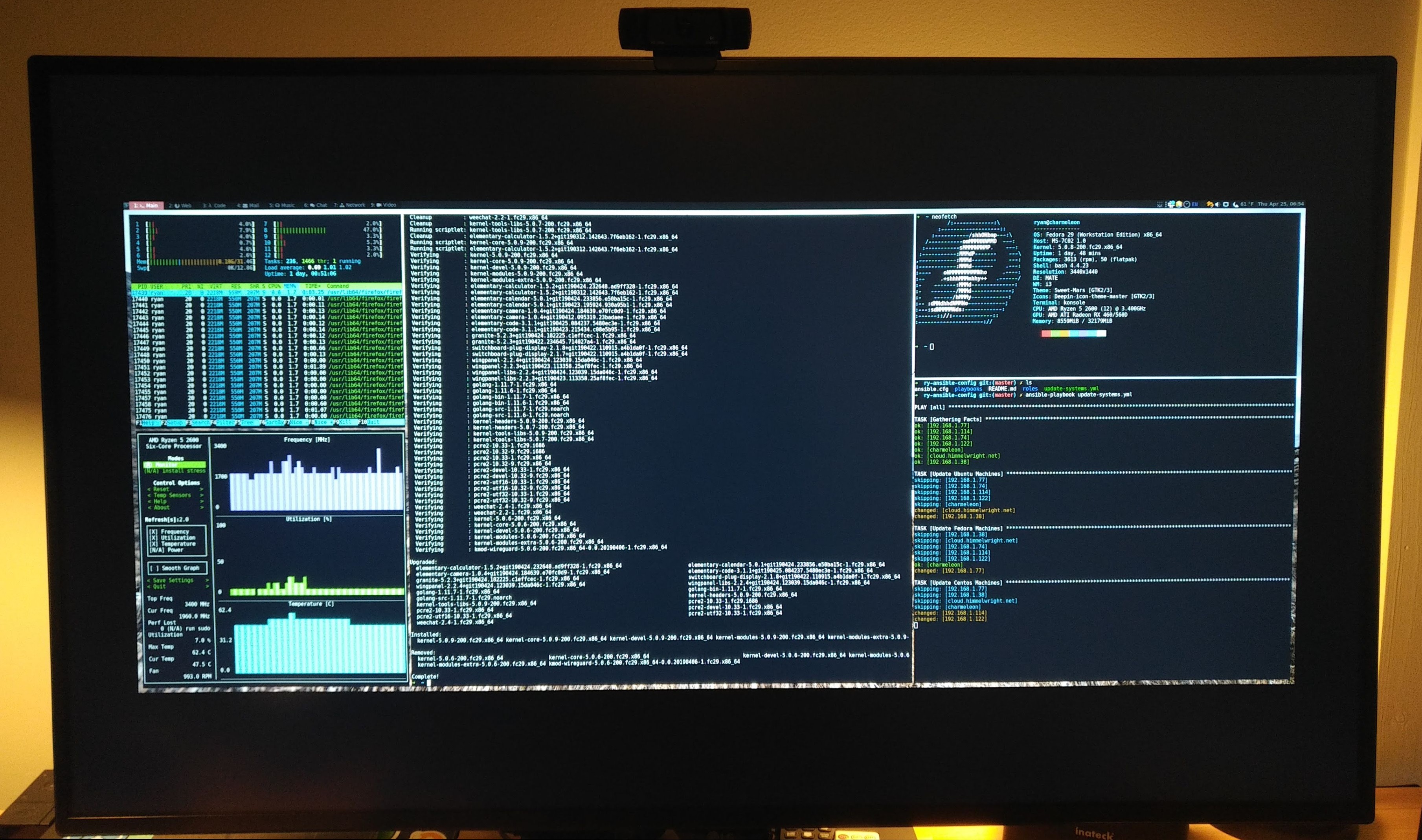 What it doesn’t fix

In conclusion, I love this setup. With this work-around, I was able to take a few use cases where my monitor didn’t fully fit my needs, and fix it. I am even happier with my monitor selection now, as I can enjoy a massive IPS display when I want it, but also have the ability to tone it down when I want to focus in more. So far, it’s working great!