I have been using neofetch as my command-line system information tool for a few years now. While browsing /r/unixporn, I noticed that several of the submissions did not have distro logos in their neofetch/screenfetch ascii art. I knew that neofetch was customizable, but have never dug into it myself. So I decided to change that.

I started my neofetch investigation the same way one should start researching any Linux command-line tool: man neofetch. Inside the man pages, I was greeted with all sorts of customization options. Eventually, I scrolled down to the section I wanted, IMAGE BACKEND.

There I learned that a custom image could be specified using the --source flag. For example, to set the art to an ascii charmeleon file I just happen to have on my desktop, I tried:

AAAAAND… It didn’t work. It was still the Fedora logo. Clearly, I was still missing something.

After some browsing, I found the ASCII art page on neofetch’s Github wiki. Reading it, I noticed that I was missing the ${c1} in my pokemon ascii files. So, I made a copy of the file and added S{c1} to the top: 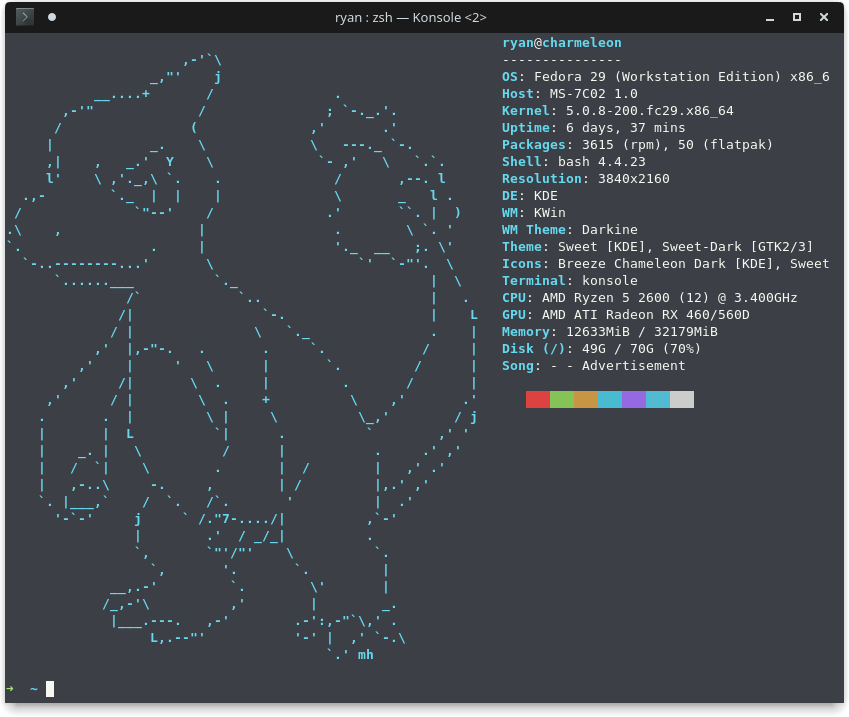 Lastly, I wanted the charmeleon ascii art to be the default neofetch output on my desktop. While I’m sure that I could have accomplished this properly by editing the ~/.config/neofetch/config.conf file I learned about, for now… creating an alias seemed easier XD. So I added the following line to my ~/.zshrc:

Now whenever I call plain neofetch on my desktop, it runs with the charmeleon art.

So that’s it. A nice short post for once! Despite the size, I hope if was useful. If you haven’t heard of neofetch before, go check it out. If you have, I encourage you to go digging through the man pages. I promise you won’t regret it. Enjoy!