Over the past few months (particularly over the holiday season), I started to explore and learn several technologies I’ve had my eye on the last few years. First on the list: Docker. These days, Docker has a massive ecosystem surrounding it, and can take years to truly master. This post on the other hand, will hopefully help you get up and playing with docker containers in just a few minutes. Lets get started.

Installing docker on Solus was easy enough. I just had to install the package, and then enable the service:

On other distributions, it may not be in the package manager, or it might be under a different name. To be sure, check out the community edition installation documentation for your specific distro.

By default, user accounts will not have permission to run docker commands without root access. So, after first installing docker, it might be tempting to just run everything using sudo, but that isn’t the best idea. To get around this, simply add the user account to the docker group:

If the docker group is not created for some reason, it can be added:

Afterwards, that user should be able to run docker commands without requiring sudo. They might have to log out and back in first.

Note: These commands may differ based on distro.

Before getting too caught up in creating and using containers, lets first go over a few useful commands that make navigating docker a bit easier.

Example of the docker ps and docker ps -a commands

The base command however, doesn’t always tell the whole story. A system might have containers that exist but are not running. A container may have been stopped, or exited if it encountered an error. Containers that are stopped or exited will not show up in the default docker ps command. To see all of the current containers on the system, run ps with the -a flag.

For example, the above command will grab and return only the lines which contain “IPAddress”.

Last but not least, don’t forget about the help command. To see all the available docker commands, run docker help.

Additionally, when using each of those specific commands, (inspect for example), a description and possible options can be shown using the --help flag (as in docker inspect --help).

Just as man pages can be extremely valuable when working on a Linux system, help is just as essential when using docker.

A docker container is created from a base image. Images can be pulled down from Dockerhub. To search docker hub from command line, use the docker search command. For example, docker search nginx will search for images related to nginx.

The search output for nginx images

The search will list all of the public images in order, from most to least stars. When a desired image is found, pull it down using the docker pull command. For example, docker pull nginx will pull down the nginx image.

Docker will then download all the layers for the image. When the download completes, the image will be locally available to create docker containers from. To see all of the local images, use the docker images command:

To delete an image, use the docker images rm command, or my preferred, lazier command, docker rmi: 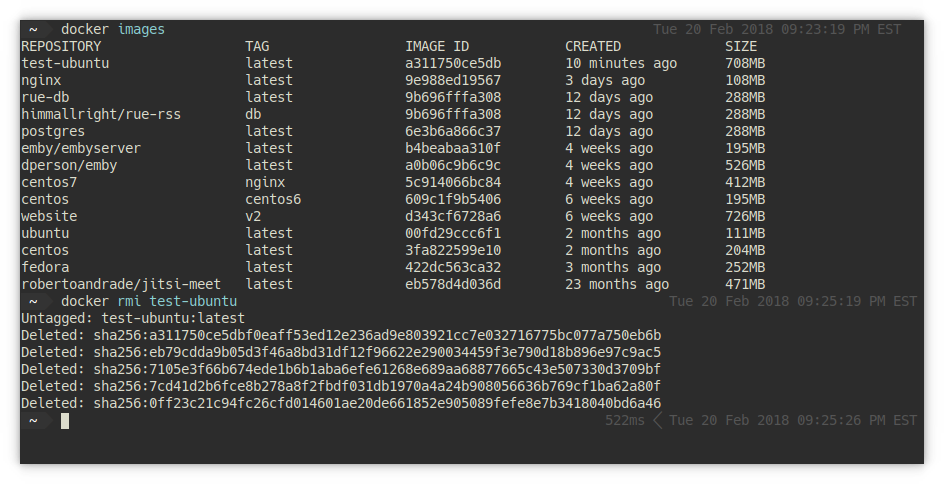 Lastly, it should be noted that custom images can be created/tailored using a Dockerfile. With a Dockerfile is defined, an image can be created from it using the docker build command. For example, the following Dockerfile would use an ubuntu image for the base, but also update & install several packages in the image:

To build the image, run the following command in the same directory as the Dockerfile (if defining a specific file, the -f flag can be used):

I like to use the -t flag, so that I can specify a name:tag for the image. This helps to make it easier to find it in the docker images list.

Docker containers can be created (but not run) with the docker create command. When creating containers, it is useful to use flags to tailor the details of the container. For example, the -m flag can be used to create a memory limit, --name to name the container, and so on. To create a simple nginx container from the image we previously pulled:

Instead of using a docker create and docker start combination, docker run can be used to both instantiate and start a container. To create and start the “web-test” container from the previous examples:

Removing all the older container images

(Note: this doesn’t work in my Fish shell, but does in bash)

After a container is running, it might occasionally be necessary to attach to it and poke around with a shell. There is the obvious way to do this, docker attach, and a somewhat work-around way, which I prefer to use: docker exec.

The attach command works as one would expect. It allows a user to “Attach local standard input, output, and error streams to a running container”. This is all well an good, except for one issue: when exiting the attached container, the container also exits.

An example using docker exec with a bash shell, as an alternative to docker attach

A way around this annoyance is to utilize the docker exec command, which allows a command to be executed inside a container. Executing a shell program inside the container, such as bash, mimics the attach command, but with the added benefit that when exiting, only the shell exits, and not the entire container.

As mentioned earlier, docker containers can be built and run using many specific commands to tailor the container and how it interfaces with the host system. There are two concepts in particular that I want to briefly touch on in this quick start post. Those two items, are ports and volumes.

Container ports can be forwarded to the host’s ports.

While it is nice to spin up a web server inside a docker container, it isn’t always very useful to only have it available to the host machine. By using the -p flag when running a container, the container’s ports can be forwarded to ports on the host system.

Using -p with just a single number, as in -p 8080, will declare that port of the container to be exposed. To forward exposed ports to the host, use two port numbers, separated with a :. The first number is the host port to bind to, and the second is the container port to expose and forward.

The above example, a nginx container is started with port 80 forwarded to port 8081 on the host. As a result, any computer connecting to port 8081 of the host machine will be directed to the nginx web server inside the container.

Containers can attach volumes from the host system for persistent data.

Lastly, by design docker containers are mean to be expendable. They are run, and then disposed. It should not be assumed that any data inside the container will be preserved by default. That is, unless volumes are used.

Docker volumes are the preferred mechanism for preserving data across container runs, and are specified using the -v flag. Similar to setting ports, volumes can be created by providing either a single path, or two separated by a :. When a single path is provided, as in -v /Data, docker will create a volume and bind it to that location within the container. Two locations can be provided to bind a directory on the host system, to the volume inside to container.

So, this has been… a rather long post. However, when it comes to Docker, this really is just the tip of the iceberg. With any luck though, you should now know the basic to at least get started. So… go ahead and have some fun!.