After switching to Spacemacs for the last year or two, it’s about time to back and pull together my own emacs configuration again. However, spacemacs has shown me several packages that I want to incorporate into my new emacs setup. Rather than resurrect and Frankenstein the changes into my old .emacs file… I’m starting from scratch. 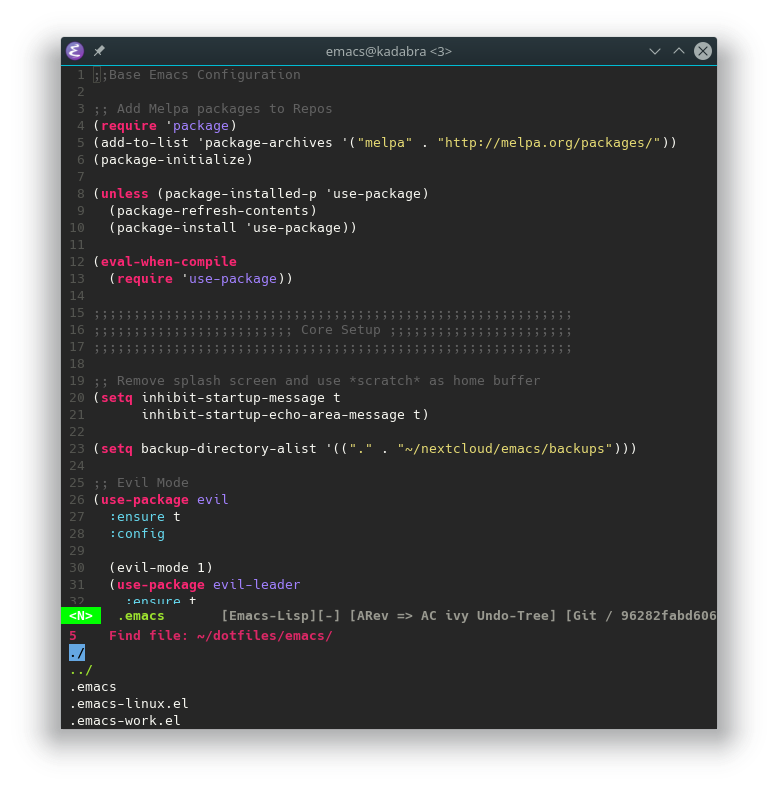 A window of my New Emacs configuration

The one emacs package that spacemacs really got me addicted to was Evil, which emulates the main features of the vim text editor. I started with emacs in college, but eventually switched to Vim which, became the first power editor that I really got into (I even bought a book to learn it better). I stuck with Vim until I became a professional LISP developer, and the switch back to Emacs was impossible to ignore, and obvious.

Even after switching to back Emacs, I have still enjoyed using command line applications like cmus, ranger, and w3m, many of which are influenced by Vim and often incorporate similar keyboard commands (at least the j, k, l, ; navigation). While it isn’t ideal for everything (I prefer to write, but not necessarily edit code with emacs-syle navigation), I never lost my love for the homerow-centric, and efficient vim-style movement commands.

Best of Both Worlds

For the last two years, Spacemacs’s default Vim configuration has provided the best of both worlds. It had all of the Evil packages pre-configured and optimized, but I could simply hit Ctrl-z, and jump back to Emacs-mode.

Spacemacs was easy to use and I enjoyed it, but it really started to have stability issues on my Windows 10 work computer. I thought that going back to a stock emacs configuration may tone down the complexity, and increase stability. I started to build a new configuration based around Evil. During setup, I was happily surprised to learn that the Ctrl-z option to switch back to Emacs-mode was a default Evil behavior… so I still have the best of both worlds!

Here is my starting Evil setup. I’ve nested other use-packages inside of it, so that if evil is configured, the packages that depend on it go ahead and configure themselves too. I’m sure this will grow over time as I add missing packages, but so far, it seems to provide all the core functionality I need.

I think it needs more key bindings over time…

After my setting up an initial install of the Evil mode parts, I discovered the amazing use-package. I have come across it before reading blog posts, but never actually tried it. After realizing how well it worked, I immediately combed through my .emacs file, converting all of my (require 'package-name) calls to use-package forms instead.

After ensuring the MELPA repos are added and initialized:

The use-package package can be installed next. I wrapped the install commands in an unless, so that when my emacs loads, it only installs use-package if it is not already installed.

Afterwards, make sure to (require 'use-package). It only needs to happen during compile, so I have mine in an (evail-when compile ...).

I keep all of this at the top of my configuration, which works well even when initializing a new computer.

When I last had my own custom emacs config, I had to also maintain an emacs_init.el file. This was an emacs-lisp script that used a mapcar to apply #'package-install across an ever-growing list of emacs packages my configuration required. My goal was to have a script, so that when configuring Emacs on a new system, I could just load and evaluate the contents of emacs_init.el, and everything required for .emacs would automatically install.

The reality was that it never fully worked. There were always a few packages that would error, or that I had forgotten to add the last time I updated my .emacs file. With use-package, this might be an issue of the past, as it allows me to combine my emacs init script with my configuration files.

After converting all of my (require 'PACKAGE-NAME) calls and related expressions to filled use-package wrappers, I learned about the :bind parameter. Instead of manually setting key binds with a setq, :bind takes a list of dotted pairs and binds the function (defined in the second spot of the pair), to the key sequence stated in the first spot of the pair.

For example, to setup my preferred ispell key-bindings, I used the following :bind parameter in my ispell use-package call:

This helps to keep the configuration a bit cleaner and organized. The syntax is also straight-forward and easy to remember.

Finally, I moved all my work-specific emacs configuration (setting up Allegro Common Lisp, defining some helper functions… and anything Windows specific) into it’s own emacs-work.el file. With that in it’s own separate file, I just needed to load it from my main .emacs configuration. The only issue with that, is I only want it to load on my work computer. So, I wrapped it with a nice little handler:

This works because I don’t name my home computers with the same name as my work machine. This little tweak worked so well, that I decided to make another file, emacs-linux.el, that I could dump my Linux and/or home specific configuration into. I only load it when on a GNU/Linux machine:

I’ve really enjoyed the ability to only load parts of my configuration when a certain condition is met. Breaking down my configuration into use-specific components seems like a good idea (like abstracting messy code to smaller functions). Right now, I try to keep my configuration file partitioned into sections, based on use-case (Writing, Development, Appearance, etc). However, as I continue to fine-tune my emacs setup, I think I might break those sections into actual files, and then load them from the main config.

The only issue I can see with that is that it can be confusing with overlapping use-cases. However, I already have to deal with that in a single configuration (which section to put it in), and my process of converting everything to use-package has actually started to minimize that issue. So it might work…

Now that I have an “Evil” Emacs setup configured, things should be returning to business as usually. As I work, I sure there’ll be a forgotten package here or there that needs to added. However, with use-package, that should be a piece of cake, and easy to maintain from here on out.