After using Notion for my notes and daily planning over the last year, there are a few issues with it that have worn on me. Over time, my uneasiness with the application has built up to the point where I have decided to switch away Notion completely. Here’s why. 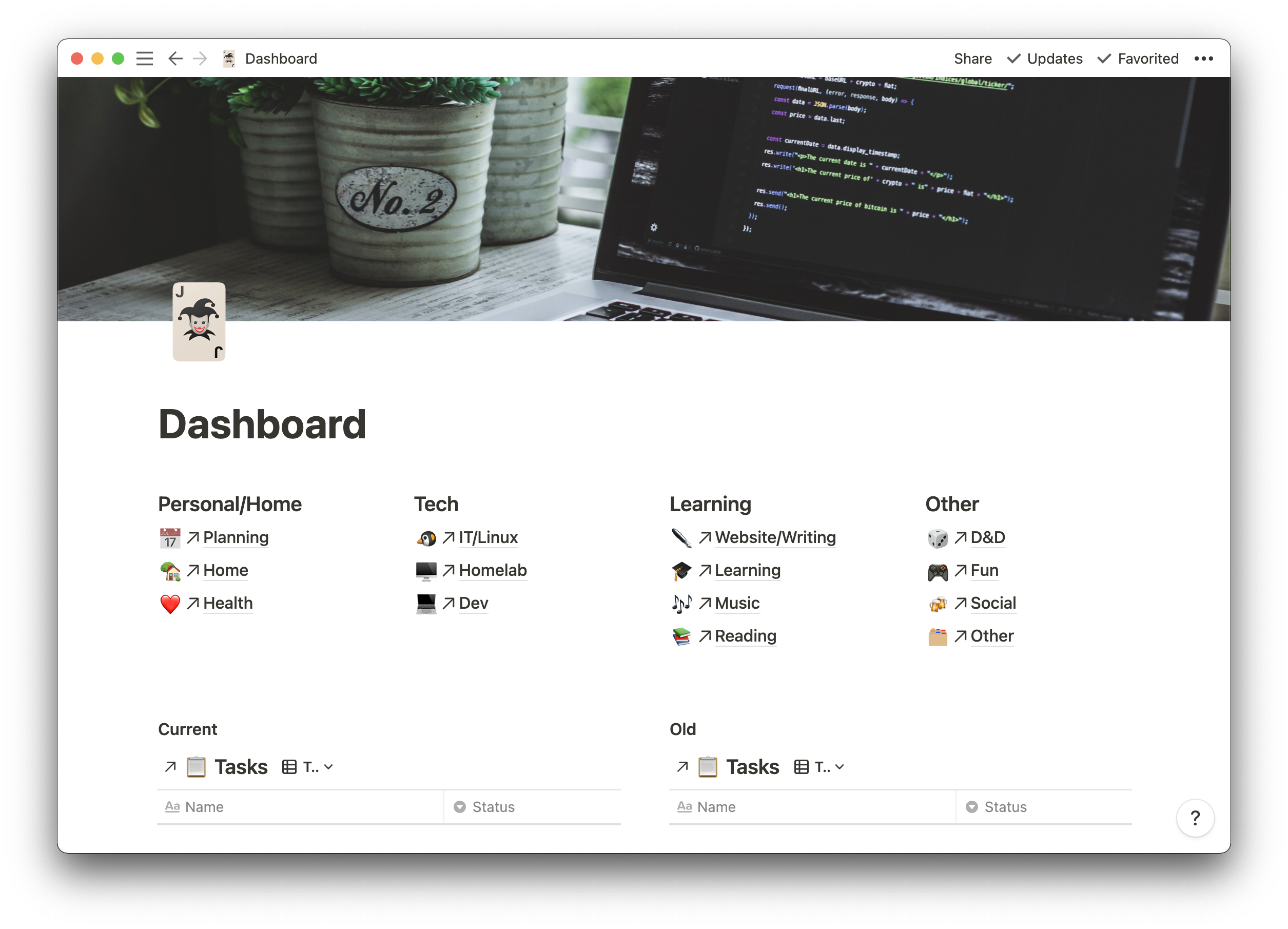 Before getting into it, I want to first state that for the most part, I have loved using Notion. It took a few iterations of figuring out how I wanted everything organized, but after my most recent system overhaul, I have it arranged perfectly.

I have everything stored in a handful of databases: Areas, Projects, Tasks, and Notes. The items in each of these DBs are all linked. For example, tasks and notes are usually attached to a project, which is all associated with a particular area (Home, Learning, *Social, and so on).

In the most recent iteration, I moved away from linking tasks to a daily journal object. Instead, I assigned everything a date, and created dashboard pages with date filters to see the Weekly and Daily boards of my tasks. All in all, it was a remarkably efficient system… most of the time…

What I liked about Notion 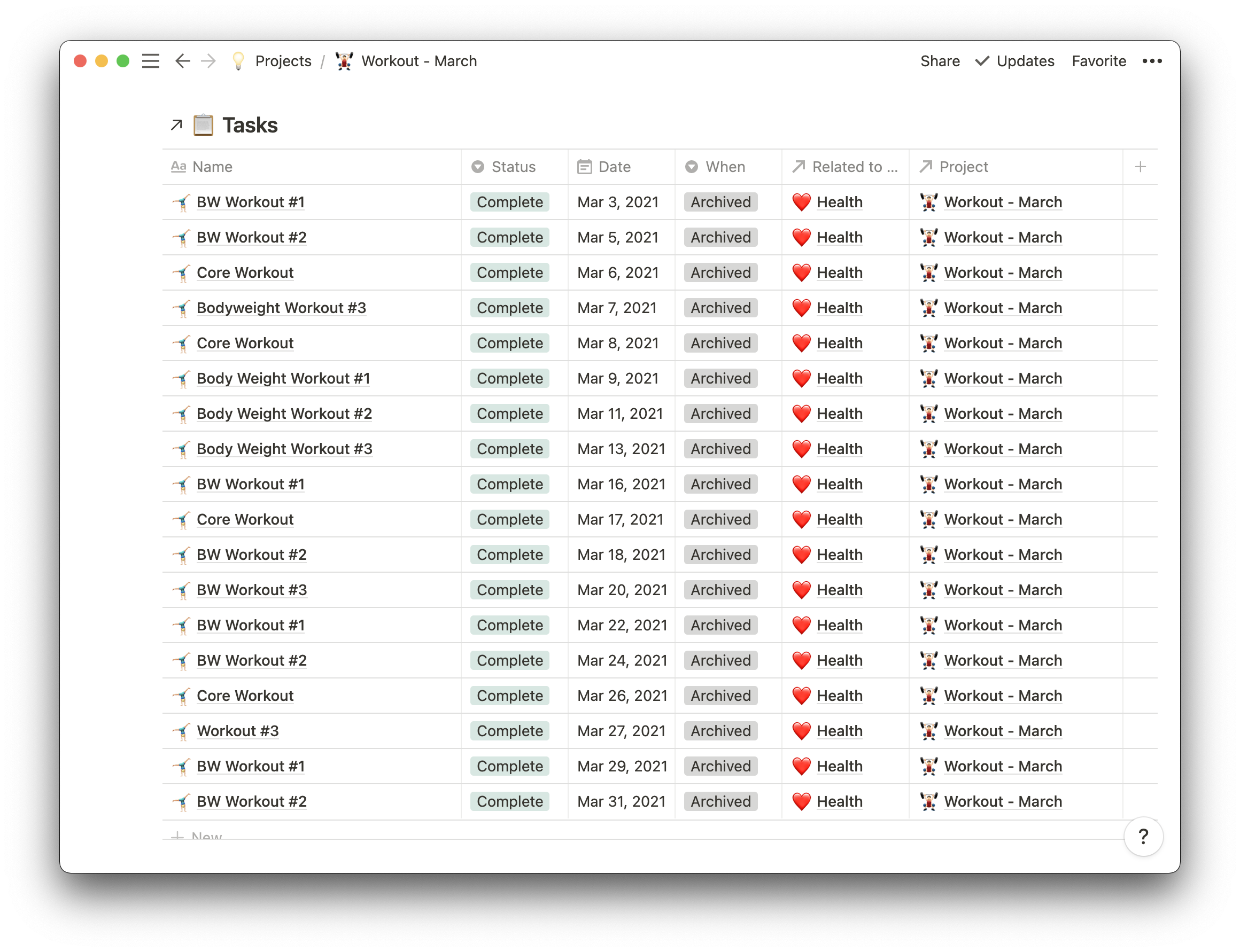 My linked tasks in a goal project

I’ll run through these quickly, as many of the statements echo my original notion post…

Easy to Setup and Use

I can have Notion easily configured on all my devices. All I have to do for setup, is install the app and log in. I even have the option to access it in a web browser, if I cannot install it as an app on a device.

As described in the Background section above, the flexibility of Notion allowed me to tailor it to whatever I needed. Notion wasn’t a system itself, as much as it was a tool that let me build my own system. It felt like a modern evolution of emacs org-mode for ‘normal’ people, which is a good thing.

With such a malleable system, it helps when the more intricate components can be automated and simplified. Luckily, Notion has a template system, which is what really allowed my to custom system to be usable. My frequent tasks were all templated to save time when entering them into the system. Without templates, Notion would have been a giant pain to maintain.

Everything can be linked

I enjoyed being able to link everything together. Seeing all the associated tasks and notes of a project in a dashboard was game changing for how I think about organizing information in a system. As an example, I would plan out monthly goals and link each task to it. That way, at the end of a month I was able to go back and see exactly if and when I had completed each task for that goal. 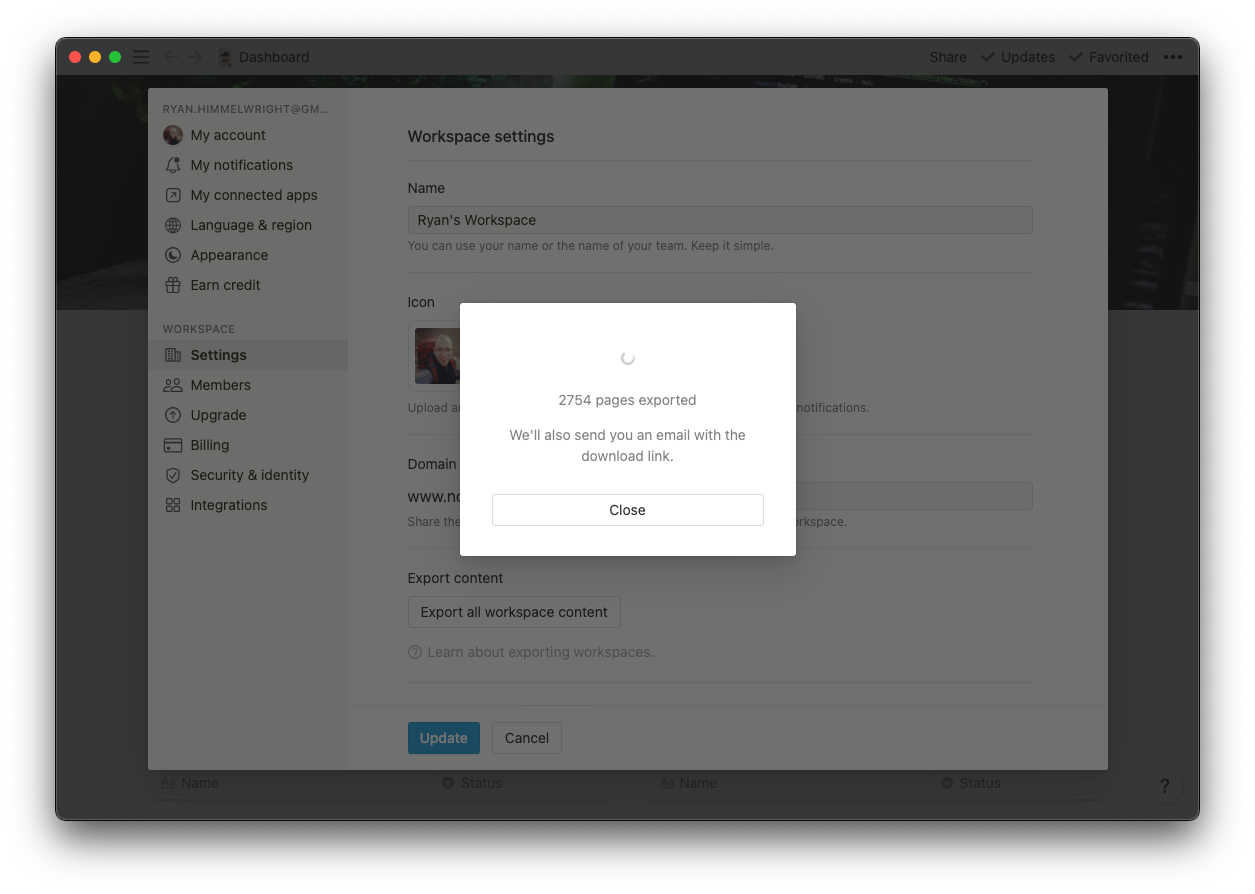 and does not have a true solution for working offline. While this can be convienient because I don’t have to worry about syncing data, it does mean that if the Notion service goes down… I can’t access anything.

I used Notion for my tasks, notes, and everything else. When it went down, I couldn’t do basic actions like check my TODO list, or jot down a quick note in my system. I had to record everything somewhere else, and then go back later to transfer it into Notion after the service was available. While Notion didn’t go down often, I still faced this problem whenever my internet went out, or I was traveling and didn’t have a connection. Combined, this happened often enough to be annoyed by it.

On a similar note, all of the data and content resides on Notion servers, and in a non-standard format. As a result, any important data-related responsibility fall’s entirely on their shoulders, and I have to accept whatever level of security they choose.

While data security is very important, my biggest concern is that the database data is in a weird format. The page content is in markdown-ish, but the only way to view everything organized properly in the databases (without hassle, as far as I know), is within Notion. There are no raw files I can easily open or convert. They have an exporting system, but every time I tried to use it, it froze. So even while in theory you can export everything to md and csv files… I couldn’t. (Update on this below)

In particular, I am most worried about data formatting. If Notion ever disbands as a company, or is acquired by a company that slowly shifts direction (or honestly, if Notion themselves shift the product over time)… I’m stuck. If I want to move to a different system, I can’t easily reformat/import the data into a new system. This alone has been a nagging hesitancy in the back of my head, the entire time I’ve used Notion. 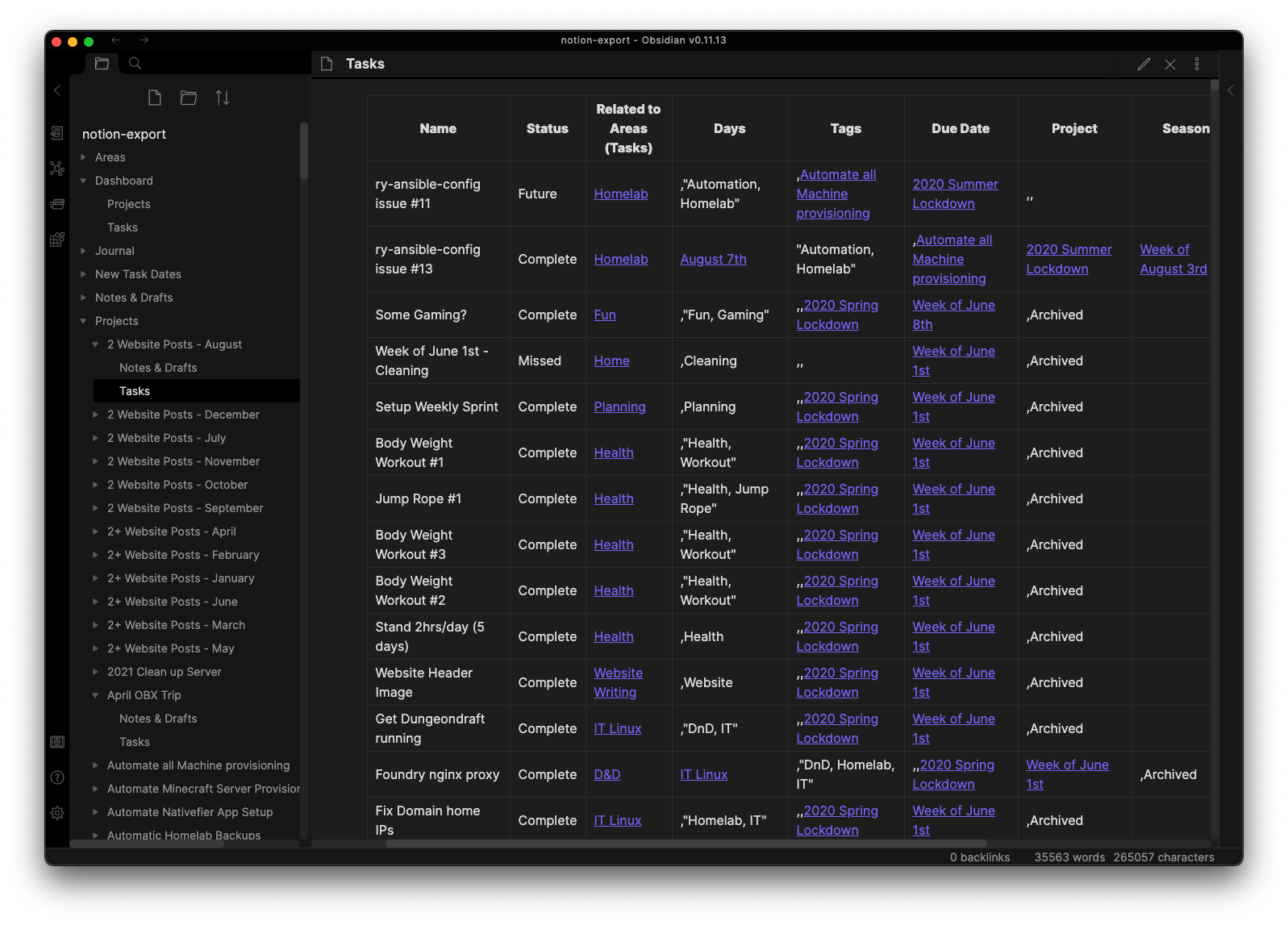 So while taking screenshots, I tried again to export the data. This time, it made it all the way through the process successfully. I was then able to take the output and run it through the Notion-to-Obsidian-Converter script (spoiler for what I’m using now 😆), and import it into an Obsidian vault. While this is nice to have as an archive, by default it isn’t useful in how it’s formatted and would be a lot of work to truly convert all the data. This is mostly due to how I’ve organized by Notion notes, but still… it is a mess and I don’t even know where to begin in understanding it. 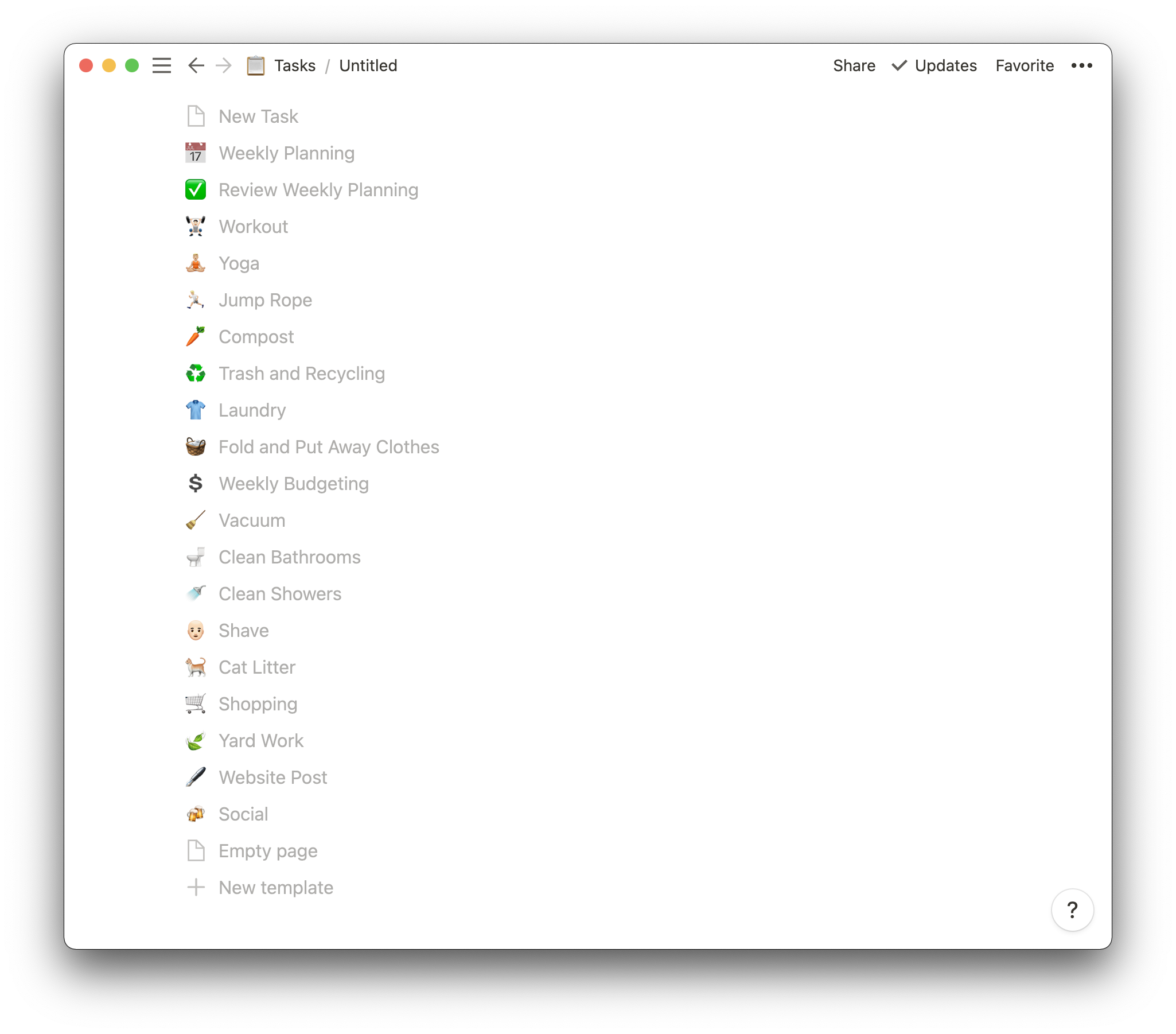 My Notion templates when creating a new task

Lastly, what ultimately pushed me to the edge and confirmed my decision to switch away from Notion, was the annoying bugs and glitches I kept experiencing. Unfortunately, some of my favorite features of Notion, were also my biggest obstacles.

There were many times when templates just did not work. I would create a new item and apply a template… but the content would not load. This was an issue I experienced very frequently. Considering how much I relied on templates, I would have to either wait till a later time when it would work again, or manually setup everything. Neither of these choices were productive.

The last straw, finally inciting action to switch, happened at the end of a week not too long ago. I noticed mid-week that all of the database links for my week’s items (linking tasks to their projects, or even the link for what area a task belonged to)… were missing. Nothing was connected.

Normally, this is set automatically with the templates, so I chalked it up to template issues, again, and manually connected everything. That Friday, I had off from work, so I sat down to plan out my vacation day. I quickly noticed that the items weren’t linked… again. That was enough. I spent the rest of my vacation day researching alternatives for Notion. (and trying to export my data… but I already stated how that (originally) went 😖). 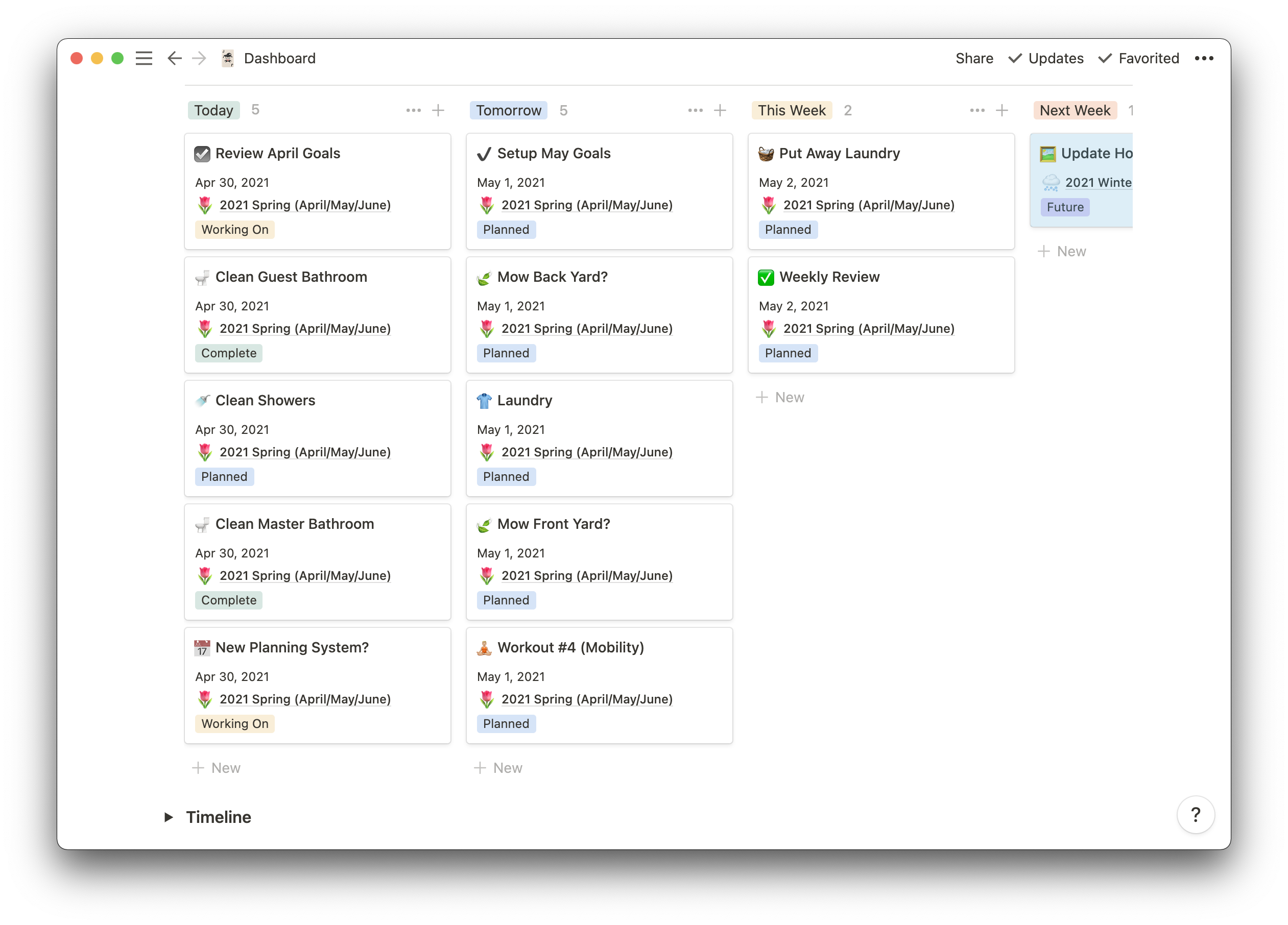 My Notion Task Board

I think Notion is a great product, but with several trade-offs. I recognize that many of the items I feel strongly about, won’t be concerns for others. In fact, I was able to overlook many of them because of how great a tool it was.

Over the past year however, my concerns about access to the data have really been nagging in the back of my mind. Every day that passed, I felt the guilt of having an ever-growing collection of notes that was equally growing in how painful it would be to loose/convert if I switched away from Notion. On top of that, every time I experienced issues with my templates, I wanted to replace Notion. So now I finally have.

It’s been a great year using a great tool. Notion is an excellent tool if you can manage not always having access to it, and if you are okay with the chance it might all go away someday. But for my planning and notes system, I just can’t afford to use something that doesn’t give me ownership of the raw files it uses.