During the Linux From Scratch process, there may be times when the build environment (computer, VM, chroot, whatever) must be restarted. If so, there are a few steps from the setup phase that have to be re-initialized. This post maps out those steps.

After setting up the virtual disk for my LFS build, I needed to define where I wanted to eventually mount it. This location is important, because it is the path that the $LFS variable is set to. The $LFS variable is used throughout the book, to easily point to where the LFS system is being built.

To set the #LFS variable, I ran the following command: *

To check that the variable set correctly, just print it out using echo (if successful, the path that was specified should print out).

There are several ways to ensure that the $LFS variable is always loaded during login. One method the book recommends is to edit the .bash-profile found in both ~ and */root, by appending the export command defined above to them. This way every time the build machine resets, simply logging into the system (which loads bash, assuming it is the default), will export the $LFS variable.

After setting the $LFS variable, I could finally mount my LFS drive/partition to that location. First, I ensured that the directory existed by running:

Note: In this command, the -v again means verbose, so a message will be printed for each directory created. The -p flag is for –parents, and will instruct “mkdir” to also make parent directories, as needed. So, if /mnt/ does not already exist, will be created along with /mnt/lfs.

After creating the directories, I mounted them with the command:

If multiple partitions are being used for the LFS build (such as a separate /home partition), they should also be mounted at this time. 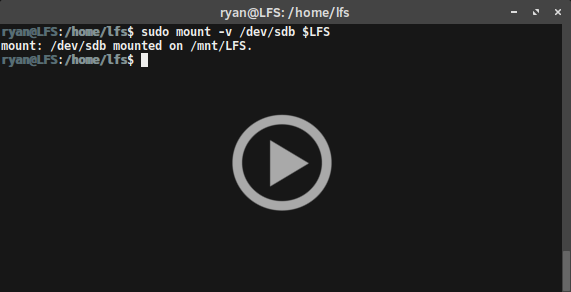 Lastly, if a swap partition is being used, do not forget to enable it using swapon:

Remember, if the LFS host system is restarted for any reason, these steps must be completed upon logging into the rebooted system. Even if measures were taking to always complete these steps (such as adding the $LFS variable to the bash profile, or mounting the partitions via the fstab file), it is still a good idea to check and make sure that they actually initialized as intended. This can prevent several headaches down the road.