After a decade of using several combinations of dual monitors, I have decided to upgrade to using a single, but better, monitor. After two years of debating, I have finally made my choice. 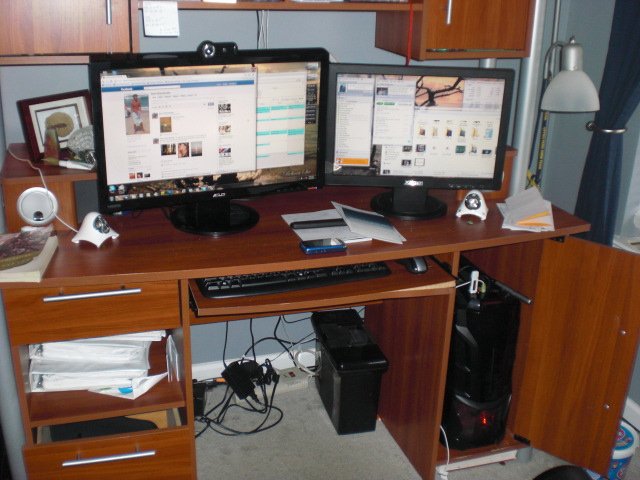 My monitor setup right before moving to college

Half way through high school, I purchased my first laptop (it also happens to be the first computer I installed Linux on. I had a special edition model, but it was very similar to this one). The laptop was replacing an old standard E-machines desktop, so I kept the spare monitor to use with the laptop. From that point on, I usually had two screens to look at, even if one was just my laptop’s screen at the far end of my desk, with an AIM window open in it. Before moving to college, I built a desktop computer with a new monitor (picture above), and utilized the old one as a secondary display. 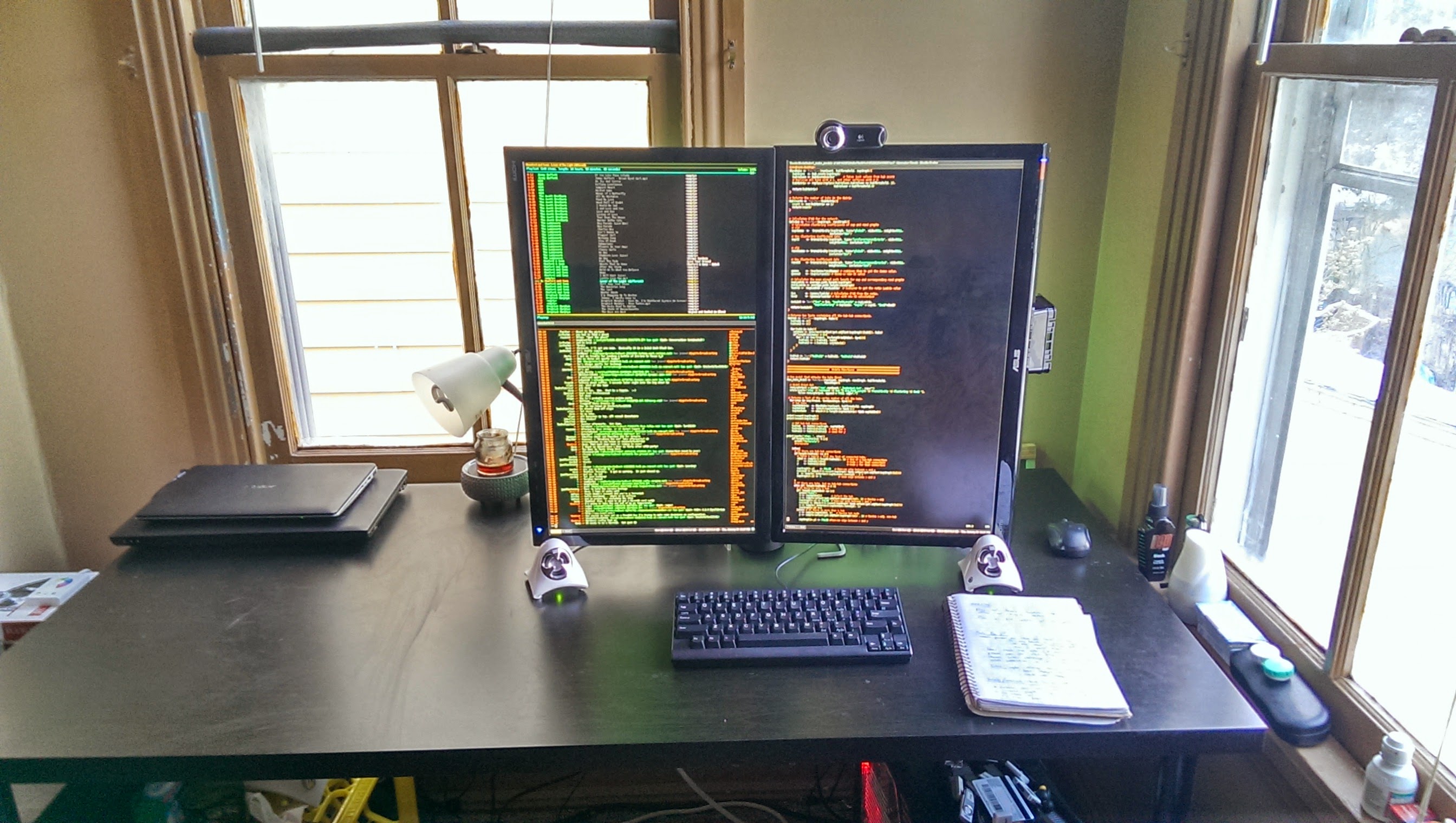 My desk during my senior year of collage

Throughout college, as I started to explore Linux and programming more, I began to experiment with using monitors in portrait orientations. Eventually, I purchased a second 23.6” 1080p monitor so they would match when paired. This gave me much more vertical real estate, which was useful when writing code, essays, or lab reports.

Why go from two, to one? 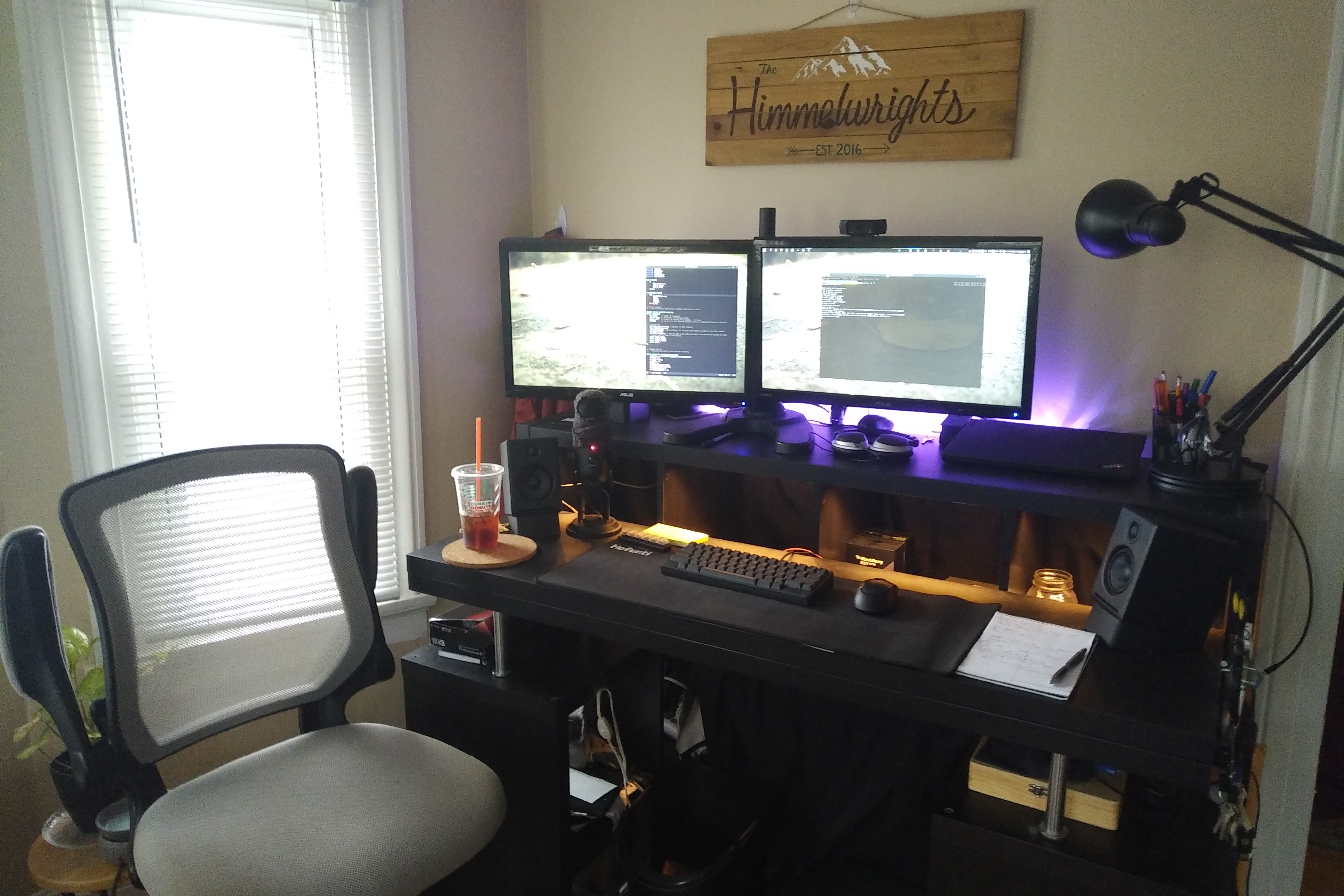 When using two monitors, I always had to have a primary and secondary.

While I like having the screen real estate of two monitors, I was never able to optimally use them because of the bezels between the monitors. While working, I would naturally shift over and use one monitor as a primary display, and the other as a secondary display. This was okay for some tasks, but it usually just meant that I just used the primary monitor, and half of the secondary one, because it was too hard to see the far end of the screen.

This issue was slightly better when using my displays in portrait mode, but that wasn’t always ideal when connecting to remote machines, or viewing wide content (videos, for example). It also didn’t solve the main issue. When looking at the screens in a natural position (head centered, looking strait forward)… I still saw two pieces of black plastic. I wanted to see my primary window directly in front of me, with some auxiliary space on either side for documentation and terminal windows. I wanted a wide screen display.

Luckily, the once extremely expensive ultra-wide and large UHD monitors have started to come down in price. After following the market for a few years, I narrowed my decision to my favorite choice in each category: The Dell u3415w and the LG ud4379b.

The Dell u3415w is the slightly older (compared to the u3417w) 34” ultra-wide monitor offering from Dell. It has a 3440x1440, 60 Hz, slightly-curved, IPS panel sitting on a solid and adjustable monitor stand. I preferred it over other ultra-wides because it could be found for a reasonable price, and had a professional build quality.

Based on my reasoning explained in the section above, an ultra-wide (1440p ones… not 1080p) would fit my mostly programmer use-case very well. Being a single monitor, I could position it directly in front of me, with my main code/content centered. The 3440px wide resolution would also allow enough horizontal space to have a full web page of documentation, and several terminal windows open on either side of the main display. Lastly, the 1440px vertical resolution would be an adequate improvement from my “starting to feel tight”, 1080p monitors. 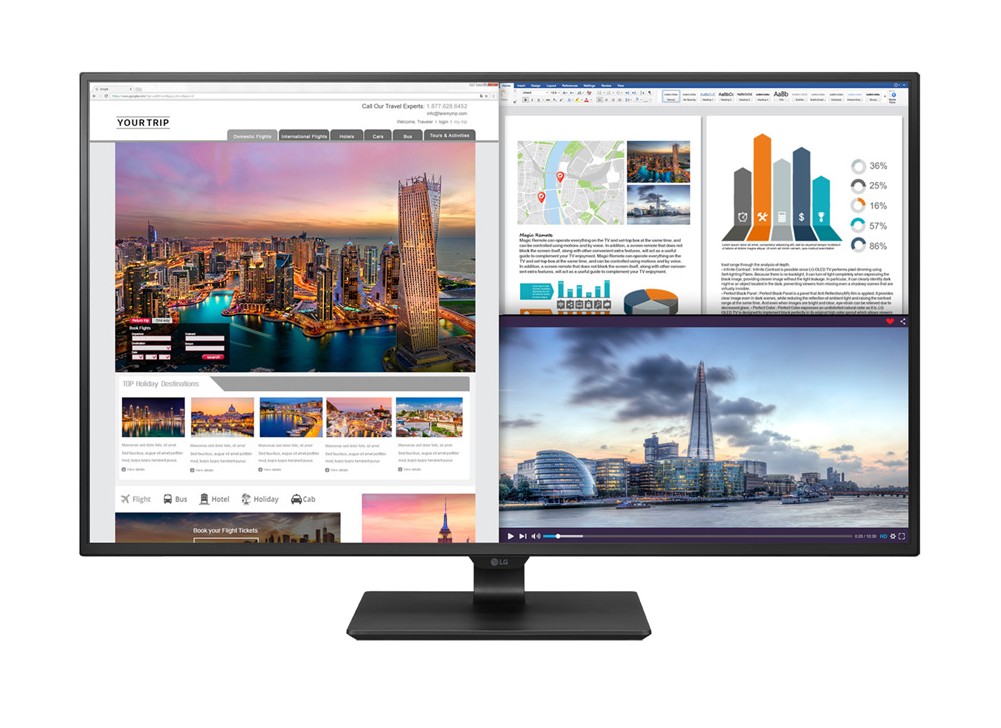 The massive LG ud4379b is a 42.5” 3840x2160px IPS display. At this size and resolution, it is roughly the equivalent of having four 21” 1920x1080px monitors aligned in a 2x2 grid… except with 0 bezel between them. Compared to other 40”+ 4K displays, I preferred this one because once again, it was reasonably priced, had great input options, and also seemed to have a half decent panel. Reviewers consistently said it had vibrant colors and minimal back light bleed.

Being single monitor, I could easily sit myself in front of it, and have my main content centered, just like with the ultra-wide. Being so large, I could still have auxiliary windows opened on either side. One advantage the ud4379 had over the ultra-wide however, was that being a massive 16:9 screen, it could easily be divided into 4 1080p screens. In fact, this model supports spitting the screen into four separate displays, each taking a different input (more on that later..). While the ultra-wides often support splitting and picture-in-picture, it seems more natural on the 43” monitor. 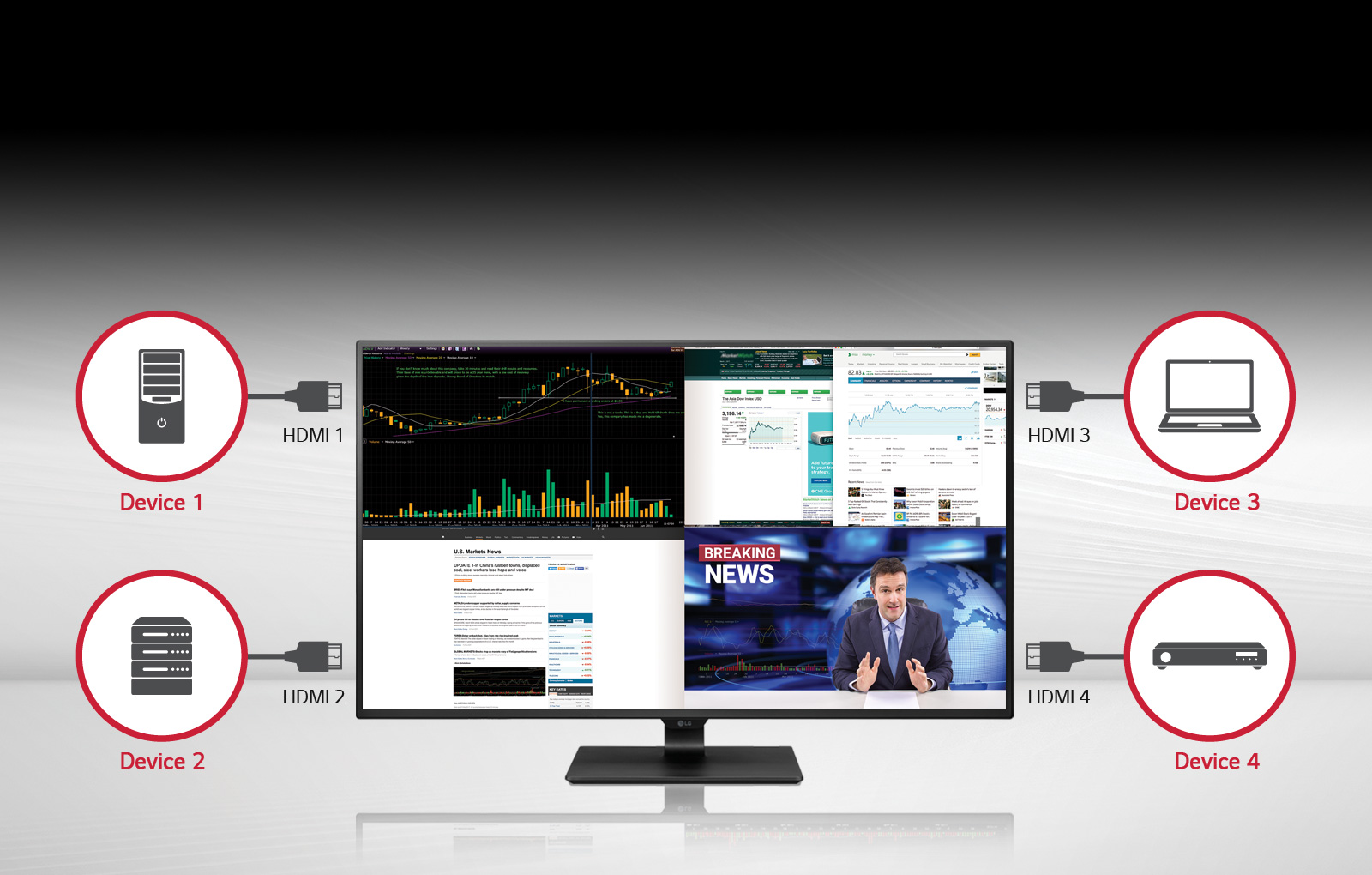 I went back and forth on which monitor I wanted several times. Eventually, I realized the long term versatility of the LG monitor was just something I could not ignore. Being able to use it as one massive display that I could fit several full VM windows in, or even as 1,2, or 4 discrete monitors makes it extremely useful for me. I tend to be playing with more than one computer or VM at a time, and it is VERY nice to have them all fit on a single display. I was worried it would be a bit too large and look stupid on my desk, especially compared to how slick the ultra-wide would look. However, in the end, practicality won out. 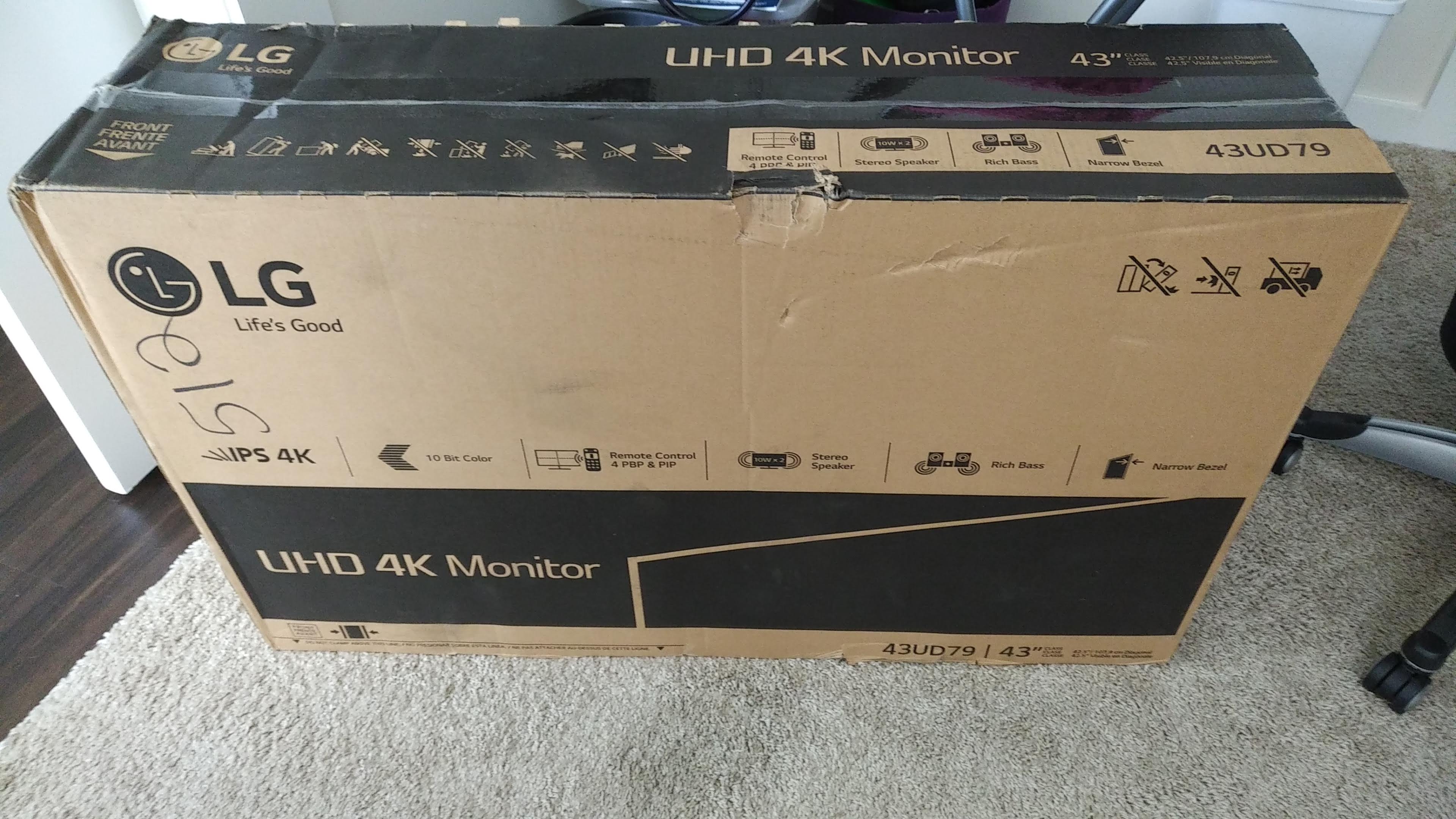 The Monitor arrived a few days later perfectly safe, despite the beat up box

After deciding that we would likely order the monitor as my birthday gift, my wife and I started watching the price a few weeks before. One day, we noticed the price had dropped $200… so we ordered it. The price soon went back up, so I’m glad we snatched it when we did!

It came a few days latter in a massive box that I happily carted up to our apartment. The box was a bit beat up, but after opening it, all the components were fine. 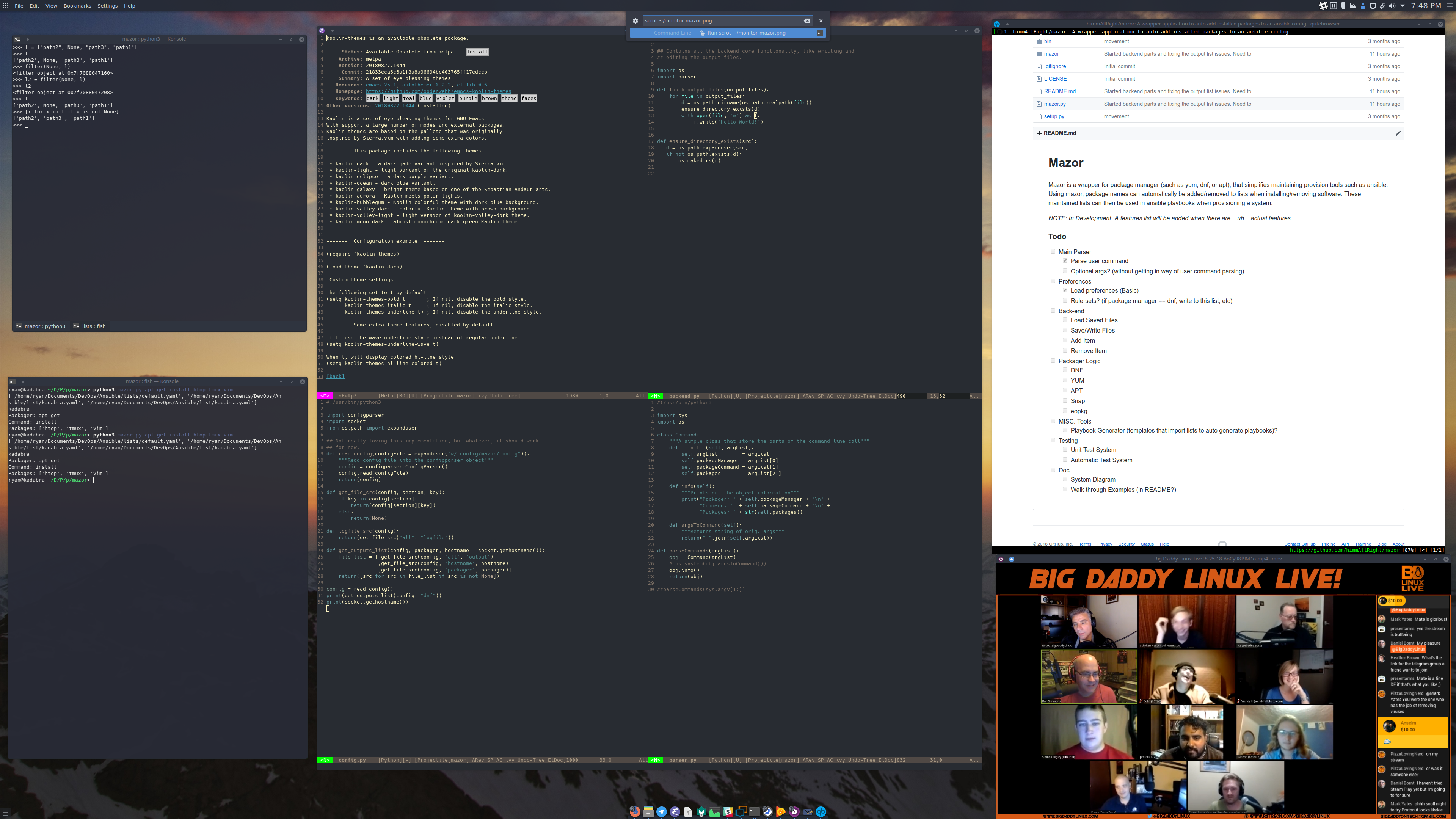 I can have my main content front and center, with other windows on the sides

Viewed from the center, the monitor edges have shadowing. 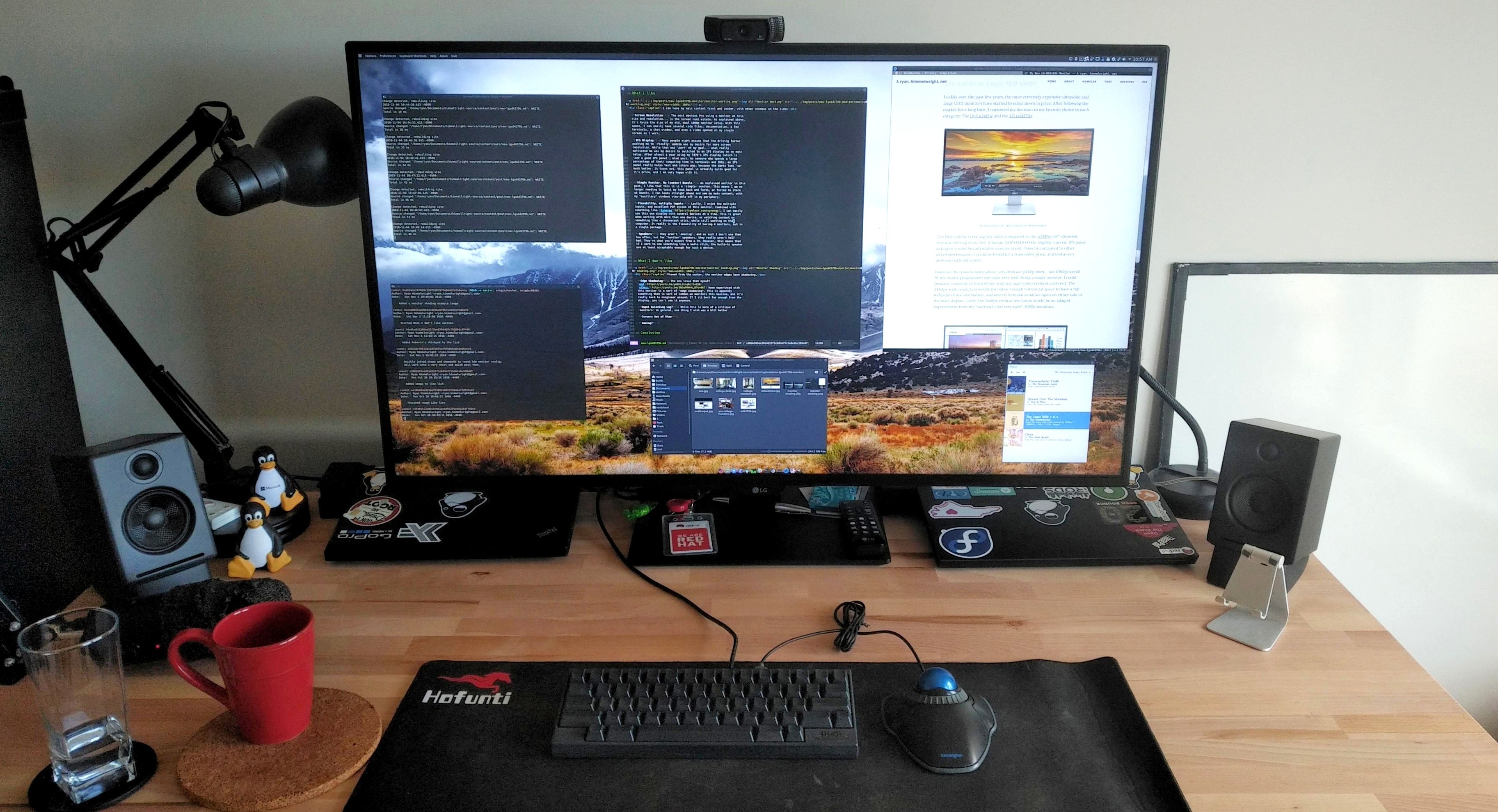 New monitor on my desk.

In conclusion, I an very happy with my new monitor. It fits all of the criteria I had, and works for my use-case perfectly. While I wouldn’t recommend it for a pure gaming machine, it might be one of the best deal productivity monitors out there.