Right before Thanksgiving, one of the hard drives in my server started get noisy… very noisy. Fearing the worst, I did a backup, and shutdown the server until I had time to investigate further… and likely replace the drive. That time came this past week.

Before throwing money at the problem, I wanted to see if ZFS was detecting any issues. When I ran a zpool status on my Data pool, it warned me that one of the devices had experienced an error, but that I had not (yet) encountered any data errors. Time to buy a new drive.

When I started shopping for hard drives, I decided to replace my broken 7200 RPM one a 5400 RPM one. I’d rather have the drives last longer and run quieter, than whatever marginal speed difference the faster spinning disks may provide. I decided to finally go with a 3TB Western Digital RED drive this time, even tough it’s a bit more expensive… mostly to try out. 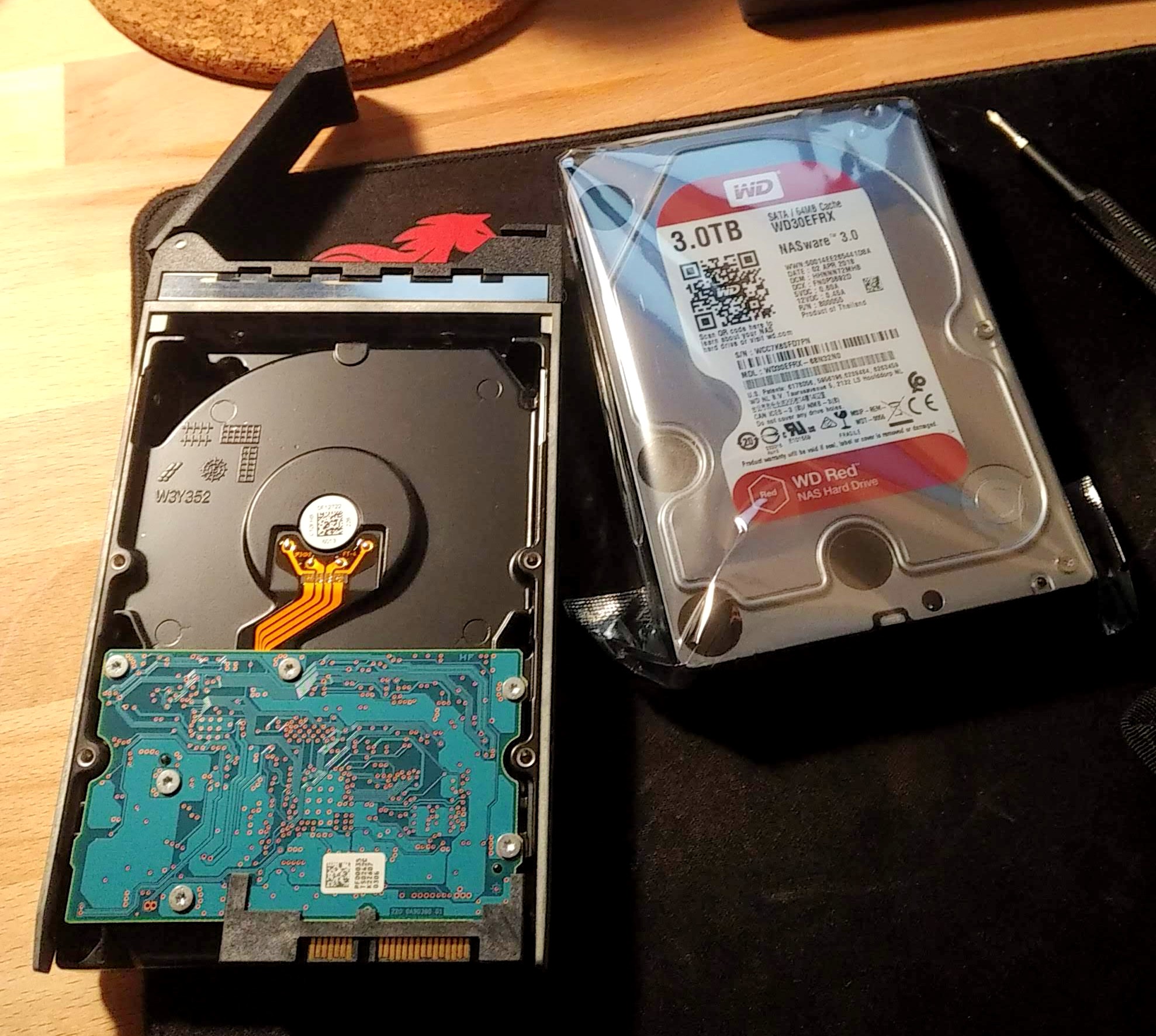 Physically swapping the hard drives was a breeze. I could easily tell which drive was the defective one… as it caused the entire server to rumble (ಠ_ಠ) . So I slid it out, unscrewed the drive from its caddy, and screwed in the new one. Lastly, I slide the caddy back into the server and booted it up. I love hot-swap drive bays.

Figuring Out Which Disk To Replace

Determining which disk was being replaced in software was a bit more difficult. In order to add the new drive to the Data pool, I needed to tell ZFS which one had been replaced. This was made more complicated by the fact that previously, the two drives in the mirror were the same model and both showed up as /dev/disk/by-id/ata-TOSHIBA_DT01ACA300_365XDR5KS. So, I needed to find the guid for each drive, because it would differ between them. I used the command zdb to spit out information about of each of my pools:

At first, I still didn’t know which drive was which. However, after looking deeper, I noticed that one of the Toshiba drives listed had the line not_present: 1, indicating that it was the broken drive I had removed!

With the guid of the broken drive known, I was able to start the process of replacing it in the pool with the new one. I issued a zpool replace command with the following arguments:

Afterwards, the resilvering process started (rebuilding the mirror by copying data from one drive to the other). I was able to check the status of the process using zpool status Data.

Resilvering can take a long time. Luckily, I only had about ~1 TB of data to rebuild, so I hoped it wouldn’t actually take the 123.5 hours that the first status predicted! Regardless, during the resilvering process, the only thing to do is wait (and hope that the other drive doesn’t break in the process!). So I did.

In just over 4 hours, my pool had rebuilt and was back online.

Looking at this output now, I realize I probably should have added the new drive by uuid instead of pathname…hmmm…

Oh well. That is a post for another day. At least my broken drive has finally been replaced!