The recent release of Elementary OS 6 (Odin) really piqued my interest. It has been a few years since I last tried Elementary, (probably around the previous release), and I was curious to see all the improvements that the team have made. So, I installed it to my test laptop… and I was not let down. I’ve used Elementary OS in the past, particularly as a solid Ubuntu-based option. Lately, I have increasingly enjoyed the core system of Fedora so much, that I am rarely persuaded to leave my podman-enriched, selinux-secured distro of choice to try any flashy new Ubutnu (or even Arch) based ones.

With that said, being an “on the edge” distro, the Fedora desktop can sometimes have a few niggles to deal with. It might be a screen-sharing issue with Wayland, sound devices not suddenly not reliably switching in the settings, or bluetooth being finicky after an update. None of these are show-stoppers, and are the small price of being on the latest and greatest, but they can quickly become tiresome during the workday.

To poke around on something beyond Fedora, I installed ElementaryOS 6 onto my test laptop (my T470 Thinkpad).. and I loved what I saw (quite literally). The first thing I love about ElementaryOS is its appearance, and I don’t just mean “it looks pretty”. The tiniest details of the design are all well reasoned and executed. The window drop shadows, color selection, and even fonts all combine to create a desktop environment that oddly feels easier to use. For example, while messing around in the terminal app, I attempted to close a tab while htop was running and had a notification window pop up to warn me that the htop process would end when the tab is closed. When I saw it the first time, I was very impressed with just how clean the pop up looked. The elementaryOS desktop has a level of polish that, while getting better, can still be quite rare on the Linux desktop.

Additionally, I found the fonts sizing and UI to be exactly what I want. I hate when window chrome has giant gaps wasting space, or when everything is packed so tightly together that it’s hard to read. The pantheon desktop in ElementaryOS finds a superb balance between the two. The control settings in ElementaryOS are easy to navigate and have some additional items I don’t normally see in the standard Gnome settings menu. For example, the notifications section is layed out in a way that is much simpler to understand. ElementaryOS has also added Parental Controls/Screentime options built into the settings menu which I appreciate, as Linux is severely lacking in this area compared to other desktop OSes.

What I like most about the settings though, is their defaults. In particular, I found many of the default keyboard shortcuts already set to what I wanted. For example, I like to switch workspaces and move windows to them using CMD-N and SHIFT-CMD-N respectively (where N is the number of the workspace to move it to). In both KDE and Gnome I have to painstakingly go through and set this up by hand. Even worse, both DEs are hit-or-miss of if they actually respect the changes, and Gnome doesn’t really support setting this past 4 workspaces.

In ElementaryOS, these shortcuts are already set (along with many others I like). For the few that I did have to change, it was simple to do so, and the changes actually worked when applied. The last item to highlight about Elementary OS, is that the entire system feels cohesive. The default apps all follow the same look and style. Some applications deviate from this, but I understand that these rogue apps are out of the Elementary team’s hands. As a heap of loosely connected software packages, it can be quite difficult to make a Linux desktop seem like it all belongs together. While not perfect, I think ElementaryOS is one of the best examples of this being accomplished.

Everything appears to be well integrated. If I change my sound settings in the menubar, they change. Same if I connect a bluetooth device from there. I can’t always say the same with some of my recent Gnome Fedora installs. Everything is well connected, and there is very little random crap floating around the system. This section is a bit smaller because honestly, there wasn’t too much that I didn’t like, and my biggest complaints are mostly petty.

Ubuntu Base: This is ridiculous, but I think the biggest downside I have with using ElementaryOS is that it is based on Ubuntu 😆 . While there are many benefits about being on an Ubuntu based system… I just prefer Fedora. Also, given that I work at Red Hat, using a Fedora/CentOS/RHEL base helps me keep up and passively learn the systems we use at work.

I prefer the Gnome Calendar Dropdown: After using Gnome on Fedora Silverblue for several months, I got used to Gnome’s drop-down calendar menu. In particular, I enjoyed how it displayed the weather and world times from my Clocks app right there. Having the various time zones easily available is actually extremely helpful when working on a world-wide distributed team. I bet this is an area that the Elementary team could easily implement something spectacular.

Limited Customization: There are limited preference options for many of the default applications. For example. the terminal app has 3 pre-configured themes you can select from, but that is all you can set the theme to. I have been able to change it using gogh, but it would be nice to have the ability to deviate from the default settings, even though I think the ElementaryOS defaults are all great.

The Occasional Random Crash: The biggest actual problem I’ve had with ElementaryOS, is that the desktop environment can occasionally crash. However, each crash has happened gracefully. The system will pause, the wallpaper goes black behind the windows, and everything disappears for a second before returning back to normal. So beyond having to wait a few seconds, the crashes have been largely harmless. (No logouts or shutdowns so far) 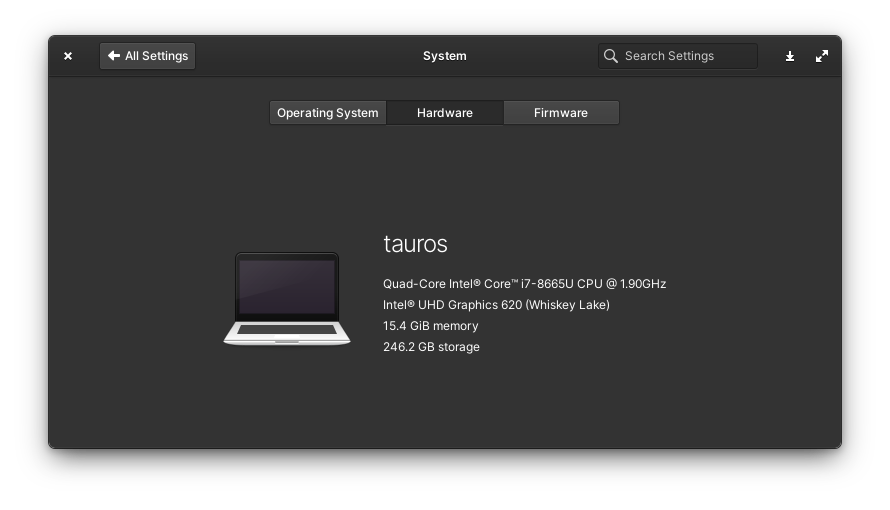 ElementaryOS feels like a weird middle ground between my normal Linux setup and macOS. When I’m on macOS, I like the user experience, but wish I had full linux under the hood. With elementaryOS, the ends of this spectrum both fall somewhere closer to the middle: The user experience is cleaner than most Linux desktops and generally more supported (due to it’s Ubuntu base), but not as much as on macOS. For example, it is more common to find a deb compared a rpm package, but both are much more rare than finding a dmg installer. On the other end, it is Linux under the hood, but not Fedora, which means some of the system stuff I enjoy isn’t as well supported (podman, toolbox, selinux).

Regardless, I have loved using ElementaryOS 6. In fact, when the Silverblue install on my work laptop started misbehaving, I decided to install ElementaryOS 6 on it instead. To get a better work setup, I also installed a Fedora server VM that auto-starts when the laptop boots 😆.

Using ElementaryOS 6 for my user-land and a Fedora VM for my dev work has been a great Linux combo over the past month!