Previously, I was using the Pantheon desktop environment on Fedora 35 for my work laptop. I liked how well Pantheon handled font scaling with my 4k monitor, and I figured out how to get the accessability menubar item working in Fedora. This allowed me to easily toggle the scaling factor as I connected and reconnected to different monitors. With that said, I have recently starting using Gnome on the laptop, and miss that feature of Pantheon.

I have been using Fedora Gnome on my work computer for the last month or so. The font scaling works well enough, and it seems to be a little less resource hungry/buggy than my cobbled-together Fedora Pantheon setup.

Most of the day, my laptop is connected to a 32” 4k monitor, which I need at least 125% scaling, and usually prefer to use 150% scaling. However, when I disconnect the laptop and want to work elsewhere, the 14” 1080p screen doesn’t have enough space at 150%, requiring me to tune down the scaling. I wanted a way to once again easily toggle though different scaling factors, without needing to navigate through the tweaks settings menus (which can also be difficult to do when connecting to a monitor that isn’t properly scaling).

So, I figured out how to script it.

First, I had to learn out how to change the scaling factor using the command line in Gnome. It turns out this is an item in gsettings, so it is easy to get the current value, and set a new one. I used these to commands to start my script:

The first line grabs the current scaling factor and saves it to the SCALE variable (for use later). The second line sets the scaling factor to the value of a SCALE_SWITCH variable (not defined yet).

I wanted to be able to toggle between my desktop monitor and laptop setups using a keybinding, but realized I ideally wanted 3 options. So, I used some simple logic to flip through the 3 options in order, which would work just as well:

This code uses the $SCALE value we grabbed in the section above, and matches it to determine what the next value (SCALE_SWITCH) should be.

Working in the CLI on the script, I liked having a debug message print out so I could see the what scale it was switching to and from. After adding the script to a key-binding, I still wanted that feedback. To accomplish this, I added a notify-send line in the script to launch a Gnome notification when it runs.

This has the potential to be a bit annoying… but it can always commented out if I really don’t like it anymore:

These two lines print out a message to both the command line (first line) and a gnome notification (second line) about what the previous scale was and what it is being switched to.

With the press of a key 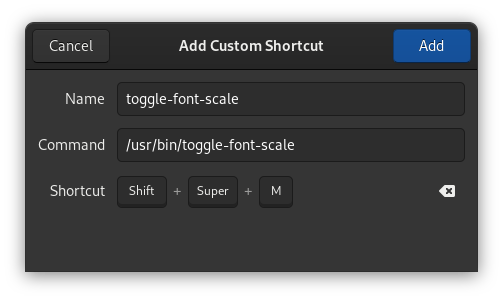 Adding shortcut to run the script.

Lastly, I wanted the ability to execute the script by hitting a key binding. First, I made a symbolic link to the script location from /usr/bin/toggle-font-scale:

Next, I added a custom Gnome keyboard shortcut using gnome settings (for me, CTRL+SHIFT+M) to run the script, which toggles the scaling factor.

After some cleanup, I had my completed script:

It’s a simple solution and I’m very happy with it. I use it all the time, and at this point, it feels like it is just a feature baked into Gnome. I’m glad I took the 20 minutes to figure it out!