Earlier this year, I noticed that my desktop seemingly did not connect to my monitor. I used the computer mostly as a server, remoting in via ssh, and didn’t think much of it. I assumed it was either a mis-plugged cable or a configuration issue. A few months later, I started to game a bit more and wanted to use my desktop as a gaming machine again. That is when I realized… it was an actual issue. Long story short, my desktop now has an rx580 instead of it’s old rx560.

Before diving into the issues, lets recap. Why did I select the rx560 in the first place? What did I like about it?

I wanted an AMD GPU

When I designed and built my desktop, I knew I wanted to get an AMD GPU because their open source drivers were great, and would allow me to skip all the headaches I’ve had over the years messing around with the proprietary Nvidia drivers. I remain very pleased with that decision, and have had zero issues getting games up and running. No hassle, period.

I needed a card to handle modest gaming

In the post about my desktop, I stated that while I wasn’t a big pc gamer, I did enjoy the occasional game. I play many games on consoles, especially the ones I play with my wife, but desktop gaming is still my favorite. That said, I don’t need all my graphics settings tuned to ultra, and I tend to not play the newest games.

The rx560 was a perfect little card that give me enough performance to play most games, without costing too much. GPUs were still coming down from steep prices due to crypto mining at the time, and saving some money on the GPU allowed me to buy more RAM (which I needed more), while remaining under budget.

I planned to eventually upgrade 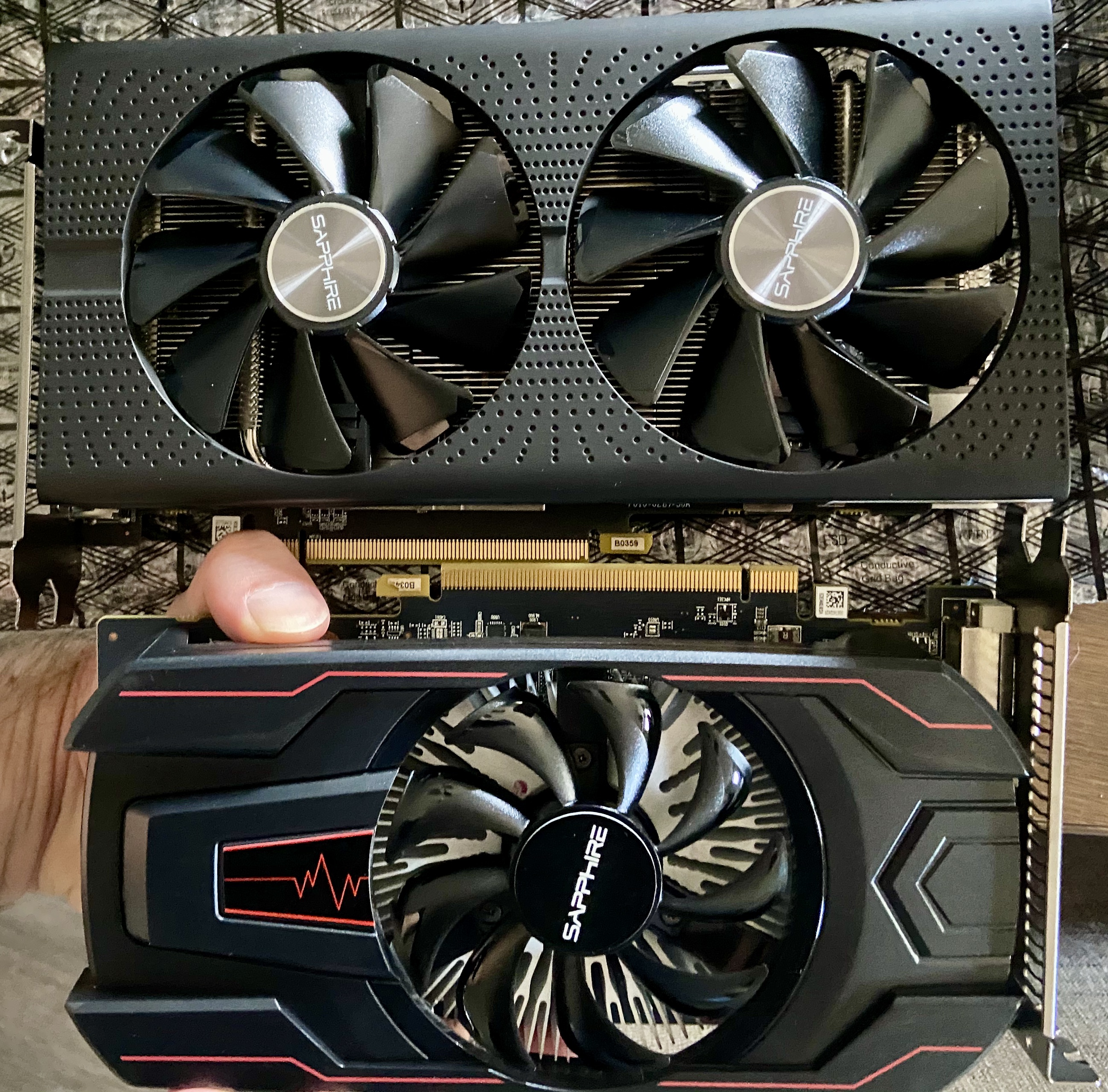 One of the reasons I wanted to build a desktop computer again was for the ability to upgrade it down the road. The build I designed had enough power to fit all of my needs, but I configured it so that if any part lacked enough performance over time, I could easily upgrade it.

I knew one of the components I might eventually want to upgrade would be the GPU. I figured that the rx560 should last me awhile, but if I started playing more games, I could easily get a better one, and hopefully prices would be lower. I could always upgrade to an rx580, or an even newer card if needed.

Okay, back to the problem. As I said before, my desktop wouldn’t connect to my monitor. When I ssh‘ed into it, everything worked as normal, and all of my VMs and containers spun up without issue, as if there was nothing wrong. I ran commands like lspci | grep 'VGA' and neofetch, and they still correctly detected and listed the rx560, confirming the system knew the card was there. I did some more testing and confirmed that I couldn’t get a signal on any monitor in the house, using a large assortment of cables.

No display would ‘connect’, even when plugged in

I attempted to boot into live cds and other os installs, but the system wouldn’t even display the BIOS when starting. Investigating further, I saw in the logs that the $DISPLAY was trying to connect via all the various inputs (DVI, HDMI, etc) during bootup, but would eventually fail stating that there was No Display Attached, even when it was plugged in. I opened up the case, ensured everything was connected properly, and even tried different cables. Nothing.

I eventually narrowed down that the problem was being caused by issues with the GPU, despite it showing up fine in my pci devices. If it wasn’t the GPU, it was likely the motherboard…. So I figured the next best (and easier) step was to swap in another card and see if it worked. Not having a spare graphics card on hand, and not being able to borrow one due to COVID-19 lockdown, my only option was to order one.

Fixing the display issues on my workstation was not an urgent issue. However, without the ability to connect to a display I couldn’t easily re-install or debug my system if something went wrong. This was compounded by the fact that I was running Fedora Silverblue, and needed to reboot every time I wanted to update my packages, never quite sure if I would be able to ssh back in when it was done. Lastly, I didn’t know what availability or shipping times would be, given the pandemic. So, I decided it was best to just order a new card now, rather than wait until the problem did become urgent. 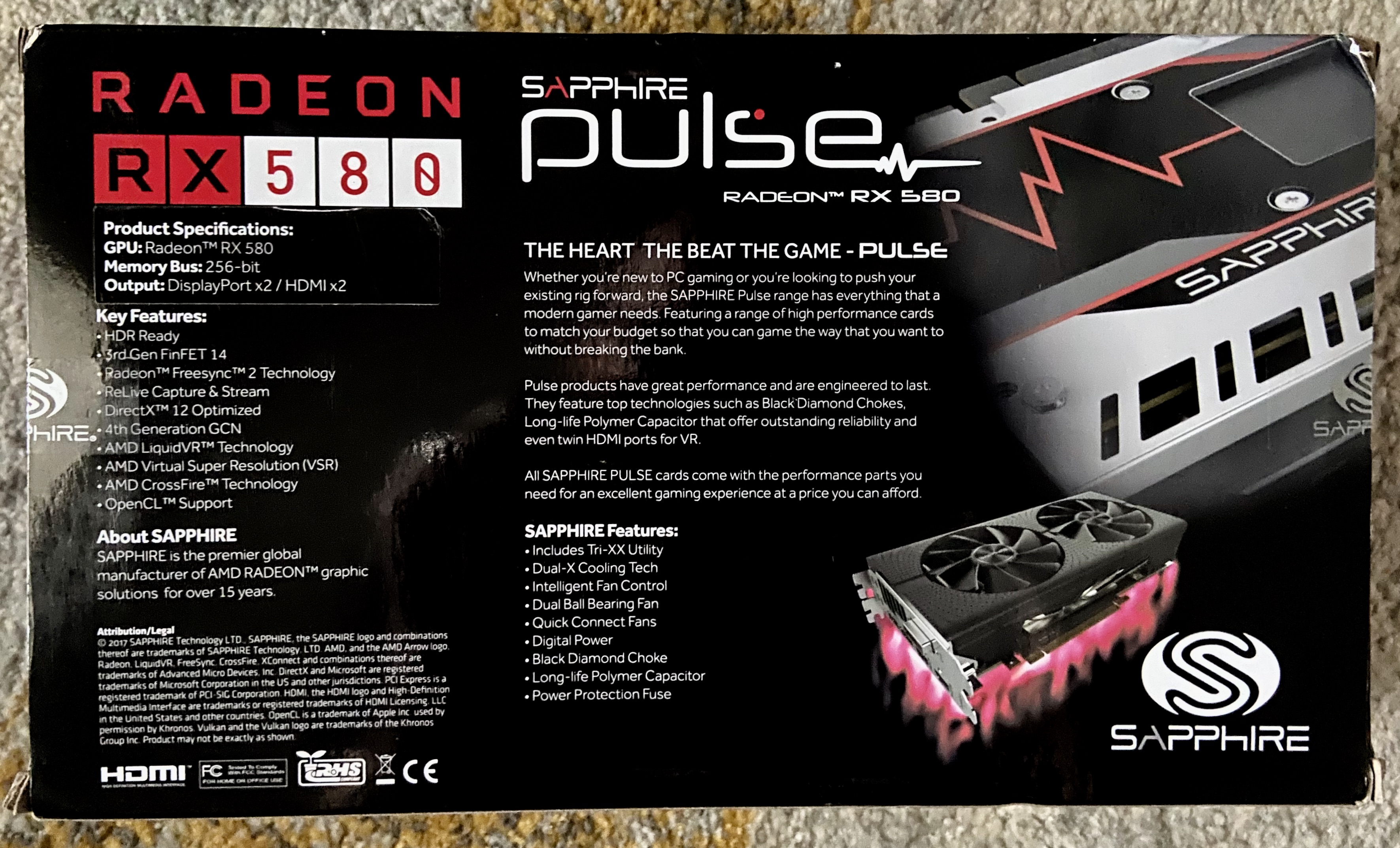 The rx580 box arrived a few days after ordering

After some brief researching, I decided on the rx580. I also considered the 570 and 590, as well as glanced at some of the newer AMD cards. The truth is, my rx560 worked fine for what I needed. If I was getting a new card though, a small spec bump would be nice. The 580 seemed to provide more than enough performance.

So far, my experience confirms this. I am able to play my games (mostly Divinity Original Sin II, Minecraft, and City Skylines, right now) generally above 60 fps, and at mostly high or better settings. Additionally, because the card isn’t being too taxed during gameplay, it doesn’t seem to be heating up too badly… which I also appreciate.

Lastly, the card dropped in price since I built my desktop. I purchased the rx580 for only a little bit more than I originally paid for the rx560, and over $100 cheaper than what it cost when I built the desktop. For what I need, the price and performance are perfect.

So far, I’m loving it. The rx580 does everything that I need it to and honestly doesn’t give me any problems. Once again, I was able to plug in the card, boot up the computer, open Steam, and start playing my games. No additional drivers, no weird configuration, no bloatware. All on Linux. I am very happy with the purchase, and it has once again reminded me why I truly do love having a desktop/workstation under my desk, even if it is used as a server most of the time.