Not too long ago, I updated our home networking equipment to an Ubiqui setup. However, we recently moved into a new house and I switched to a mesh wifi network. No, the switch was not just to increase wifi coverage throughout the entire house. The real motivator (ironically)… was that I needed a better ethernet connection…

About two years ago, I replaced my Linksys wifi router(s) with the tiny-but-mighty Ubiquity Edge Router X, paired with an Ubiqui AP AC lite wifi access point. I loved it. It handled our web traffic flawlessly, and unlike the previous Linksys routers, I never had to randomly restart it. It just worked for months on end.

I enjoyed the setup so much in fact, that while I was thrilled to have a Google Fiber internet connection when we moved to Durham NC last year, I was a little sad that setting up the edgerouter on the fiber modem required a little bit of tweaking. I looked into it but ultimately decided that figuring it out wasn’t worth the hassle for the short period of time which we’d likely live in the apartment. So, I reluctantly used the Google provided box which worked okay.

The Google fiber was indeed short lived, as my wife and I just moved into a house this past month. When working with Spectrum to setup our internet (yea… I know), we discovered that while there were coax plugs in both the living room and master bedroom, we couldn’t actually find any hook-ups to connect the house to the external cable/internet service line.

After searching with multiple techs, we decided just to have them drill a line into the master bedroom (which is at the back of the house and allows the connection box to be with the other utility meters). Our house isn’t massive, and having the router in the bedroom works well enough, except for one issue.

In past apartments, I had used power-line ethernet adapters to extend ethernet from a router in a different room to my computers. The speeds weren’t great, but then again, neither was our connection so it wasn’t a huge problem. This time though, I ran some tests… 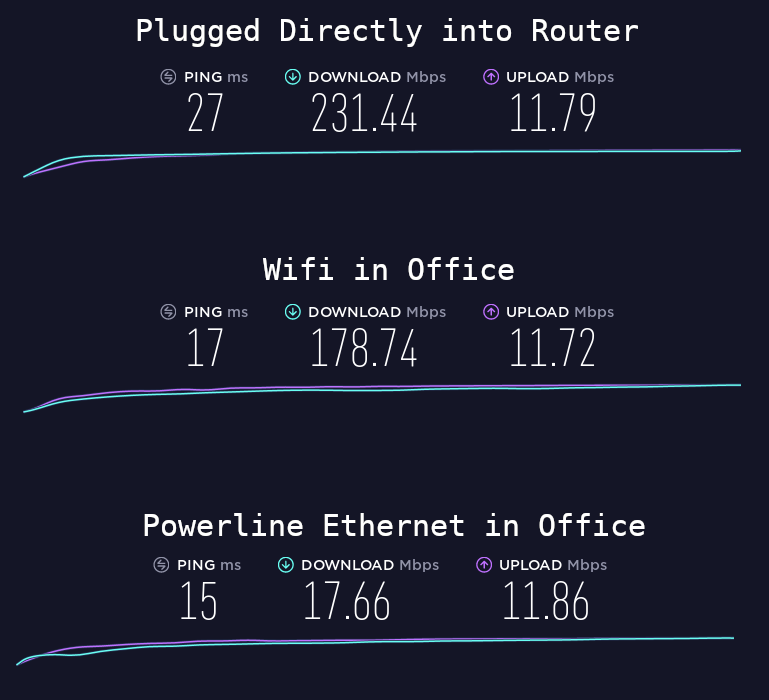 Different internet Speed test results after hooking up internet to the house.

So, while it worked, this setup wasn’t ideal. More importantly, I found out a few days later there was a massive problem that completely prevents me from being able to use the power-line adapters. The house’s electrical panel is between the master bedroom and the office, which is the worst case scenario. One day, we turned on the washing machine and our internet went down. It wasn’t just the power-line connections that were effected… the entire network, wifi and router was essentially being dos’d by the washer. When I unplugged the power-line adapters, it worked again. Power-line was not an option anymore.

I wondered if there was another way to connect ethernet in my office, beyond having to drop cat6 cable across the house. I looked into wifi bridges, but most of the devices were designed for large distances, and ones for home use were not much better than a power-line adapters when it came to performance/reliability. While looking at wifi bridges, a thought occurred to me… would a mesh network system work? If the satellite devices had ethernet ports… maybe.

When I started researching wifi mesh networks, the orbi systems were consistently rated the highest, and people generally reported that they experienced great performance. When I dug further into it, I learned that this high level of performance was likely due to the orbi’s “tri-band wifi technology”. Basically, in addition to the normal 2.4 and 5 Ghz network bands, the orbi system has a second 5 Ghz band dedicated to connecting the orbi router and satilites together. In other words… a dedicated wifi bridge :D. 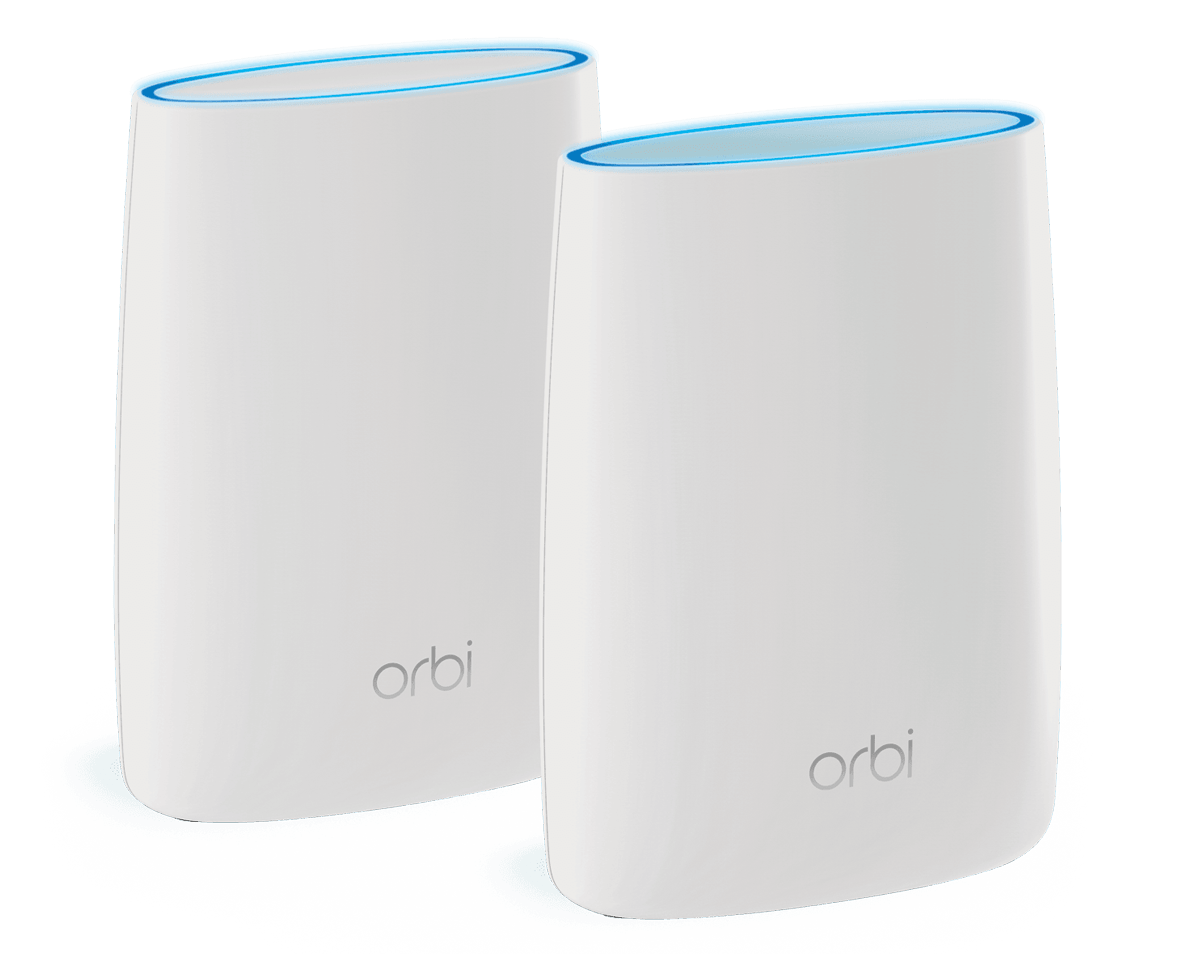 The RBK50 system comes with 1 router, and 1 satilite device. Both have 4 etherent ports.

I started looking at the orbi hardware and saw that there were several types of satellites. Some were just wall plugs, but a few had 2-4 ethernet ports. Perfect. Realizing this, I ended up ordering the RBK50 system, which contained a 4-port orbi router, and a 4-port satellite. My hope was that I could set up the router in the master bedroom with our modem, and then put the satellite in my office on the other end of the house. I could then connect my hardwired devices, or even a network switch, into the ethernet ports on the satellite. Problem sovled.

I have ordered and setup my orbi system, and will write a review post about it sometime in the future. This post’s intention was mostly to just explain why I ended up getting an orbi system.

Many people have started to use home wifi “mesh” systems because they provide a simple solution to cover an entire house with a strong wifi connection. While this is a great bonus I get from having the mesh system, as this post demonstrates, my main purpose for purchasing the orbi was to be a solid “ethernet over wifi” system in the new house. So far… it’s working great.