It’s been about a year since I traded my 16” Macbook Pro for a M1 Macbook Air. Well, I’ve done it again. Three months ago I decided to trade in my M1 MacBook air for a 14” M1 Pro Macbook Pro (Ugh, these names! 😂). Two months ago, the 14” was delivered and I finally made the physical swap. Similar to last time, I didn’t initiate this trade because I had any issues with my current MacBook, or even needed the newer one. But once again… I’m glad I did it. 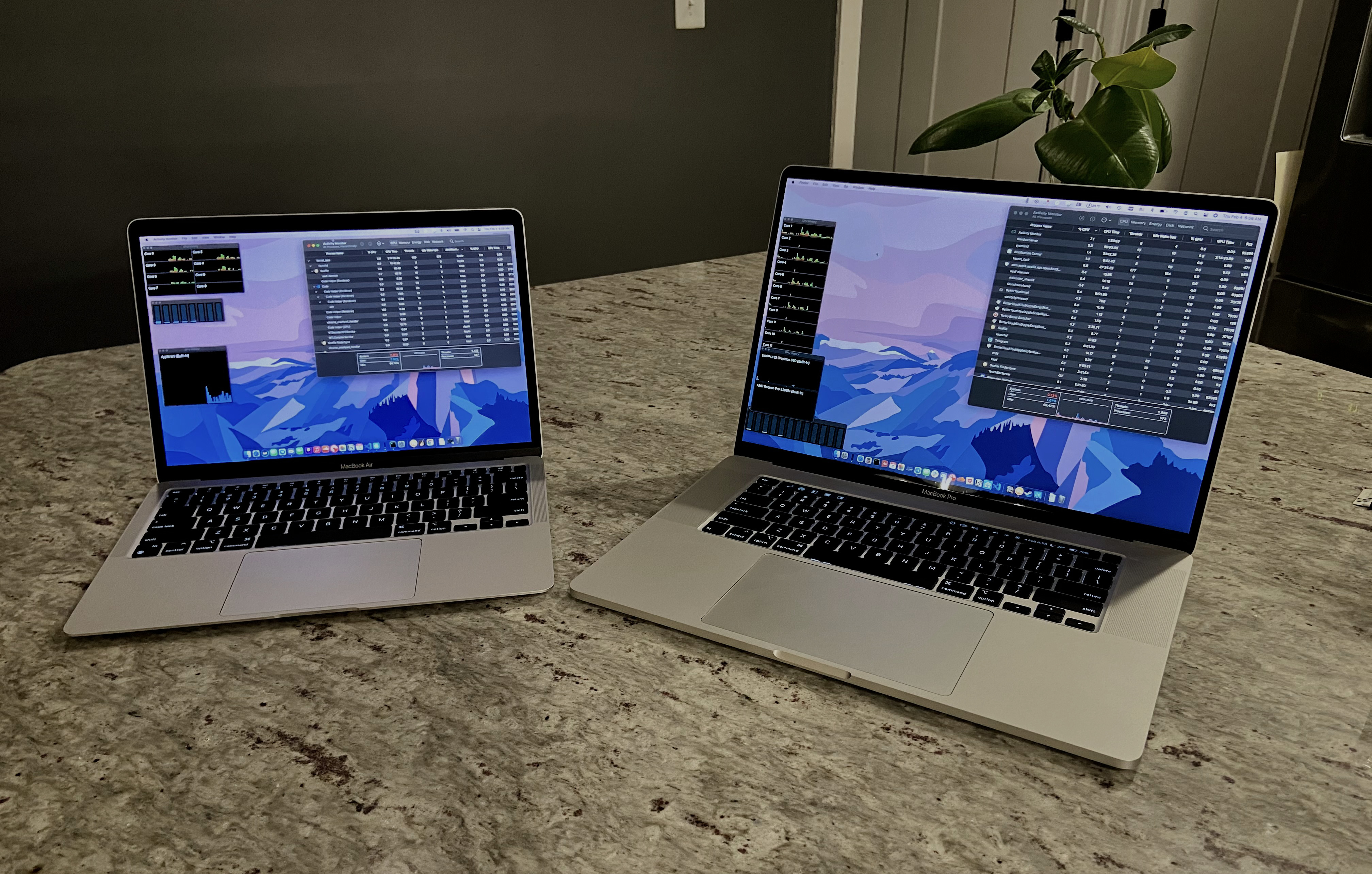 When rumors of new Apple Silicon MacBooks Pros started to surface, I really wasn’t too tempted to swap. I have been very happy with my M1 MacBook air. Having said that, as I watched Apple announce the new Pros… it occured to me that the 14” pro was likely my ideal MacBook. A perfect mix of all the things I loved about my m1 air, while adding the few things I missed from my 2019 16” Intel-based Macbook Pro.

To showcase this mingling, lets go through the list of what I have said about my previous two MacBooks, and see how the 14” (m1 pro) stacks up against them: The 14” Pro has basically the same keyboard as both the 2019 16” and the m1 air. The only difference is that the background behind the keys is all black, which I think looks nice. As on the m1 air, the 14” has a row of physical function keys (full sized this time), which I prefer over the touchbar that my 2019 16” had.

The trackpad remains the same, which is a good thing. It’s a different size than the previous two devices (which makes sense), but it seems to fit this device quite well. 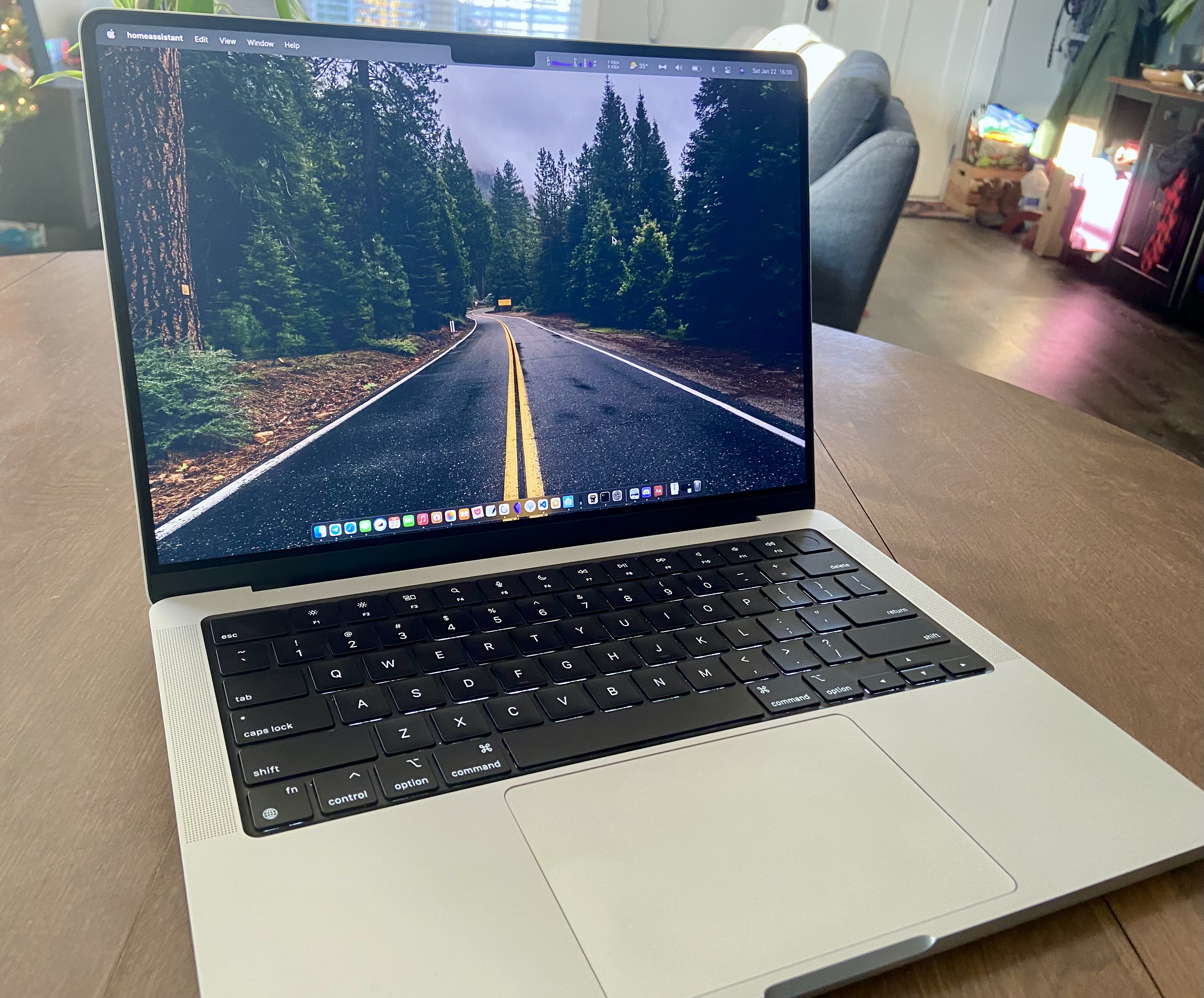 While still smaller than the 16”, the 14” is a small but noticeable improvement over the 13” m1 air. Additionally, the smaller bezels help minimize any compromises on portability due to the size increase. This size maximizes screen space, without being too unwieldy.

With the new XDR display, the 14” is also technologically better than the previous two. It has a 120hz refresh rate, with 1000 nit sustained and 1600 nit peak brightness when watching HDR content (500 nit peak during normal usage). With 10,000 mini-LEDs, the contrast is also much better (blacks look black, not grey). Lastly, the default resolution is a proper 200% scaling of native (which I’ve been critical about on previous Macbooks). So out of the 3 laptops, the 14” easily has the best display.

While not ideal, Apple honestly did a great job making the best of the situation by setting the space under the notch to a 16:10 screen ratio. This means the areas on either side of the notch are extra screen space. If you absolutely hate the notch, you can black out the top part of the screen and have the screen from before (including a massive top bezel). There really isn’t much reason to complain.

The speakers on all these laptops are great for laptop speakers. However, it was a real downgrade going from the 2019 16” Pro to the m1 Air. The 16” had amazing speakers. I’m not sure if the 14” speakers are better than the old 16” speakers (I’m assuming not), but they are much better than the air and something that I am very glad to have back.

This was another sacrafice when switching from the old 16” to the m1 air. The 16” had 4 thunderbolt ports, while the m1 air had 2. Thats it. The 14” by comparison has 3 thunderbolt ports… but also a mag safe charger (so the charging cable doesn’t have to consume one of the thunderbolt ports). Additionally, the 14” has an HDMI port, and an SD card reader.

Another connectivity problem on the M1 Air was that it only supported 1 external monitor. While the the base 14” doesn’t quite support the 2019 16”’s 4 4k displays (or 2 6k), it does support up to 2 (6k@60Hz) external displays (note, if you get the M1 MAX chip, that supports 4 external displays but I wasn’t considering that configuration). So, while the 14” M1 Pro doesn’t connect to the most devices, it’s small improvement over the air allows it to fully support my configuration.

The 14” might not beat the M1 air here, but it is more than good enough, and substantially better than the old 16” was. I honestly don’t know how it compares to the air because both exceed my needs. 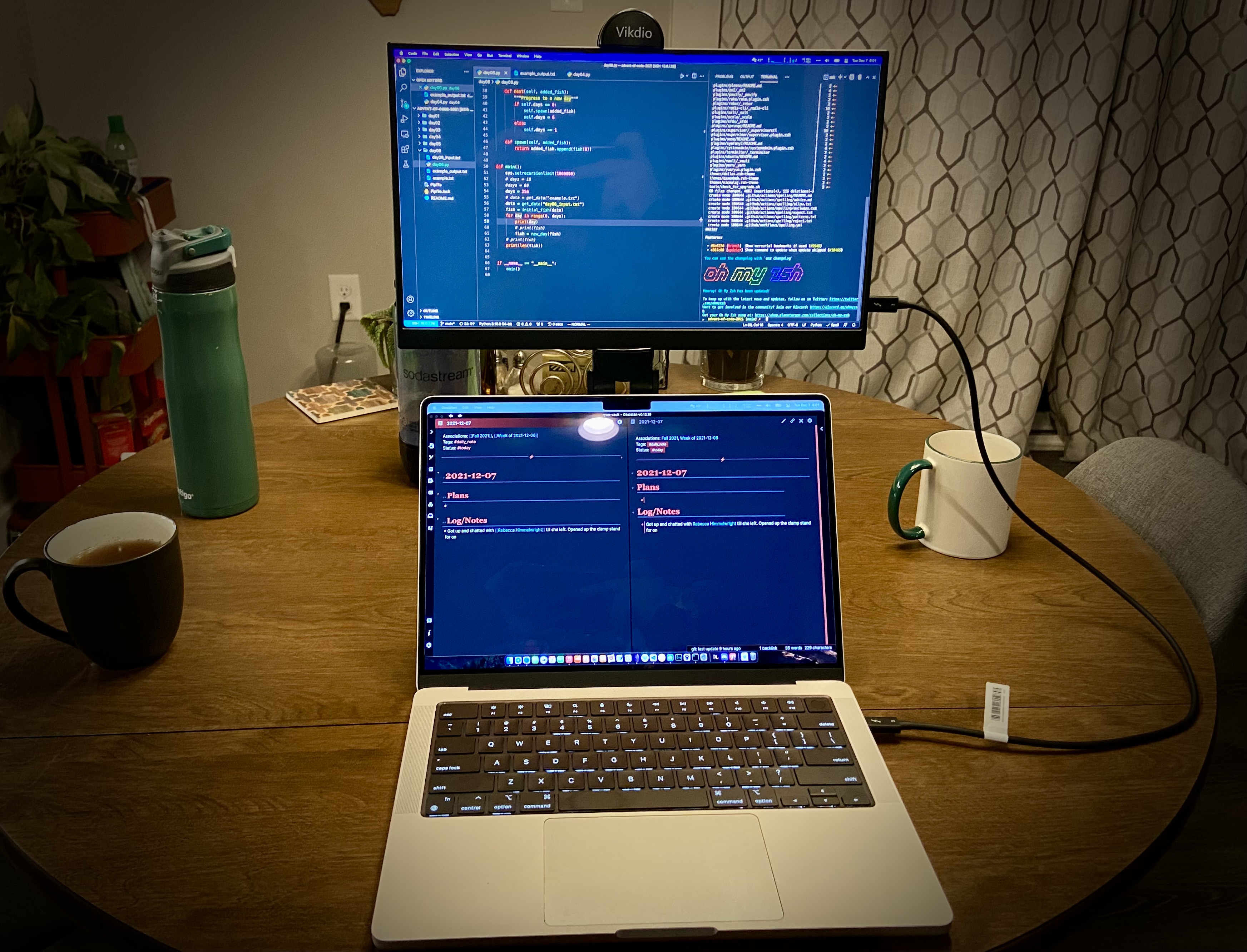 Dispite being slightly larger than the M1 air, the 14” M1 Pro is still a very portable workstation.

The 16” is obviously the least portable. That’s a given.

Comparing the 14” to the air is quite interesting though. Yes, it’s a bit heavier and boxier than the tapered body of the air… but it’s in essence just as portable. It’s 3.5 lbs (which is worth it for how solid it feels), with about the same foot print. It’s technically less portable, but in reality… it’s still a very portable device.

The m1 air was surprisingly on par or better than the 2019 16”, at least for the tasks I did. The 14” improves on that. The base model 14” has the same number of CPU cores, but with 2 efficiency and 6 performance cores (compared to the 4 and 4 on the M1 air), which helps increase performance a bit. Additionally, the 14” has almost double the GPU cores (14 vs the 8 that my upgrade air had), which is very noticeable. Lastly, the 14” has crazy fast disk and memory speeds, which contributes much more to general performance than people give credit to. 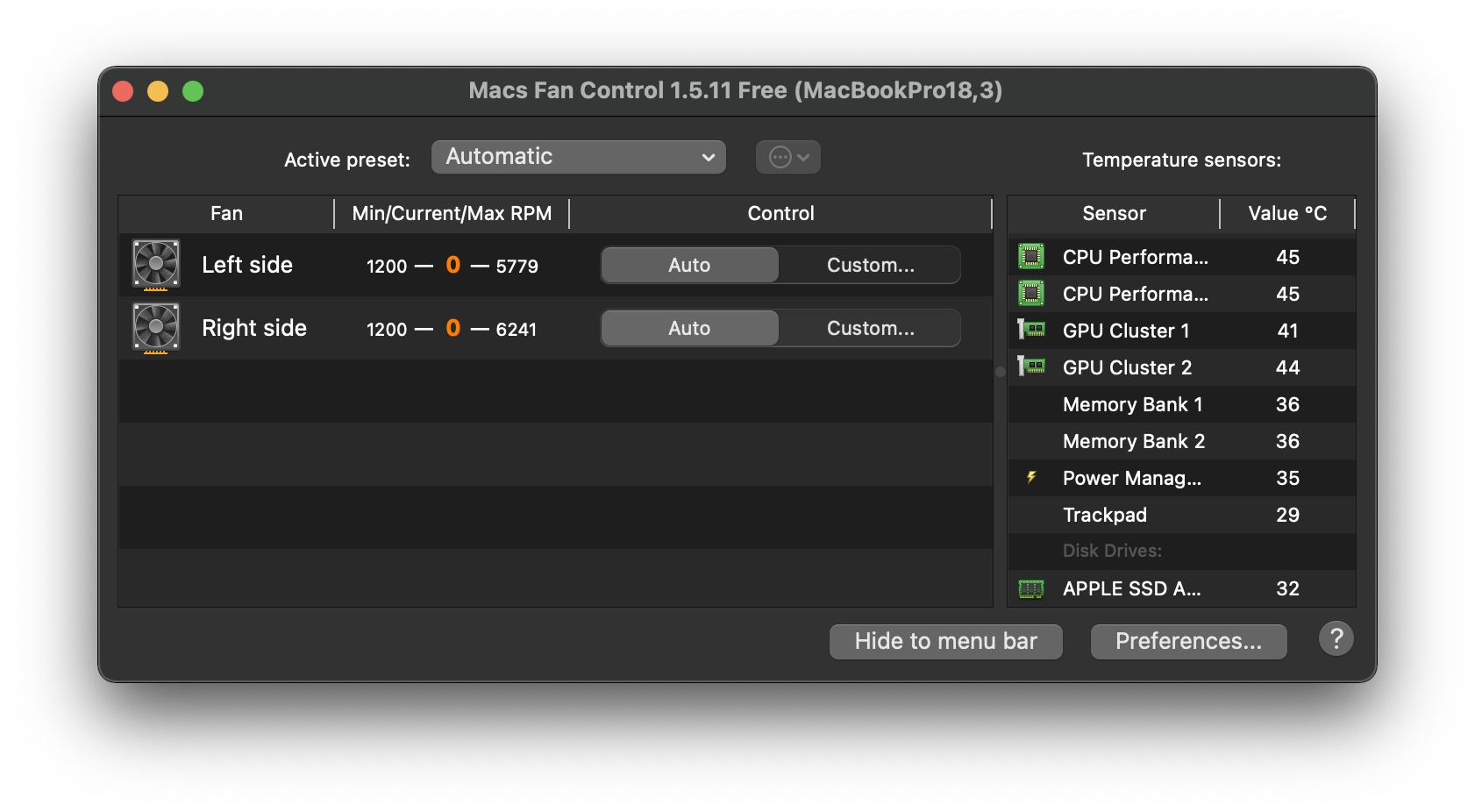 Most of the time, the fans sit at 0 RPM. When they do turn on, I can’t hear them.

Comparing the 14” to the fanless m1 air… they’re the same. Seriously.

I guess the 14” technically can get louder than the air, but I have hardly noticed the fans turn on, and when they do the only way I know is by reading sensor data. If anything, it means the 14” M1 pro stays cooler than my air did, while still remaining just as silent.

Deciding on the trade

In addition to the 14” being the perfect combination of everything I loved about my previous 2 MacBooks, there were a few other factors that eventually led me to make the trade-in.

Two ‘Upgrades’ for One

When looking up the trade-in value for my M1 Air, I noticed it was only valued about $50 more than my wife’s base model M1 Air (which has half as much RAM and SSD storage). With that, I realized that we could trade in my wife’s computer and “spend” that $50 lost in trade-in value to “upgrade” her M1 Air to 16GB RAM and 512GB storage (which is an amazing value for Apple hardware!). So, we were able to both upgrade our devices with this single trade-in.

My MacBook setup at my desk. It’s become my daily driver computer.

The final reason for this trade-in, was that after switching to my M1 Air, I started daily driving my Mac again… and didn’t stop.

I have used all my MacBooks as my portable device. However, I started using the air as my main computer, even at my desk. I still have my desktop for when I need or want to run Linux, but honestly, most of the time when I’m not working, it’s shut off. I have started to enjoy using MacOS for my desktop computing needs, and Linux for all my sever ones. Another perfect combination.

Being my main computing device, I wanted something that had just a little bit more to offer than the M1 air. And the 14” does. It has amazing interface specs (display, speakers, keyboard, mic), a little bit more GPU power (which I was hitting the limit of on the Air), and still silent fans for when I do push the CPU. 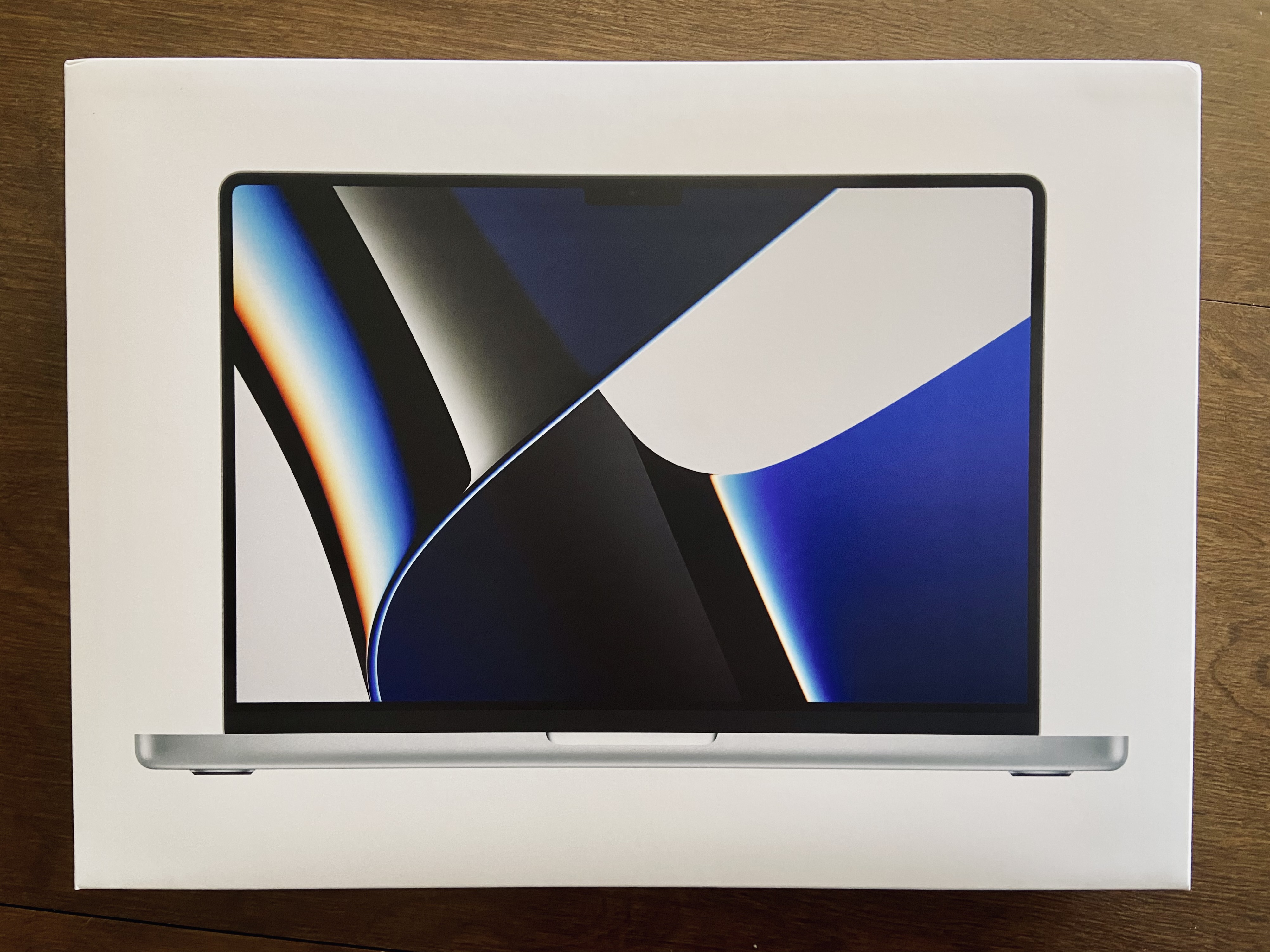 With that, I traded in the m1 air. I decided on the cheapest base model (8 cpu cores/14 gpu cores, 16GB RAM, and 512GB SSD) to not only keep the price down, but also for an easier trade in the future. As I learned during this process, base model devices have a much better value when using Apple trade-in (which is convenient). Once I prove I can keep an MacBook for more than a year… I’ll consider getting devices with upgrades again 😆.

I also selected the base model because, again… I didn’t need to trade the air. It is an amazing computer. However, the 14” seemed to solve the very few problems I had with both the 16 and air, giving it the potential to be my ideal laptop. And so far, it has been.

Still, for most people… just get the MacBook Air. You won’t be let down.