After months of planning and price tracking, I have finished upgrading several major components in my Linux workstation. What started as a planned cpu and ram upgrade, eventually ballooned to also include a new motherboard and a secondary gpu. Let me explain… 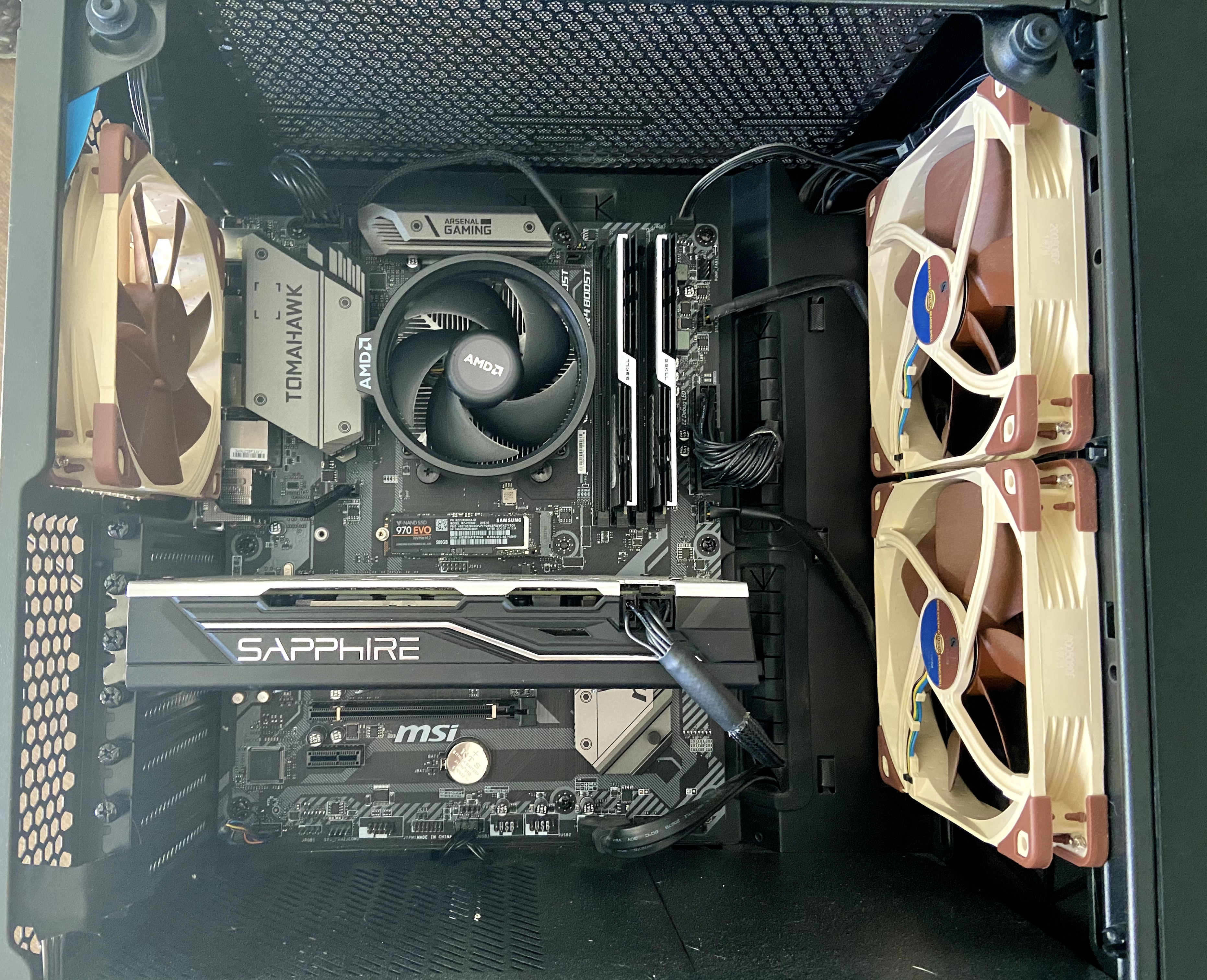 Charmeleon Internals before the upgrades

Over two years ago, I built and designed charmeleon, my Linux desktop computer. In that post, I explained how I wanted to upgrade charmeleon over time, and designed it with that in mind. Since the initial build, I have only made a few minor enhancements: I added a nvme ssd and upgraded the gpu after the original one stopped working. The next change I hoped to make was adding more RAM. However, as I started down that path, things became a bit more… complicated… 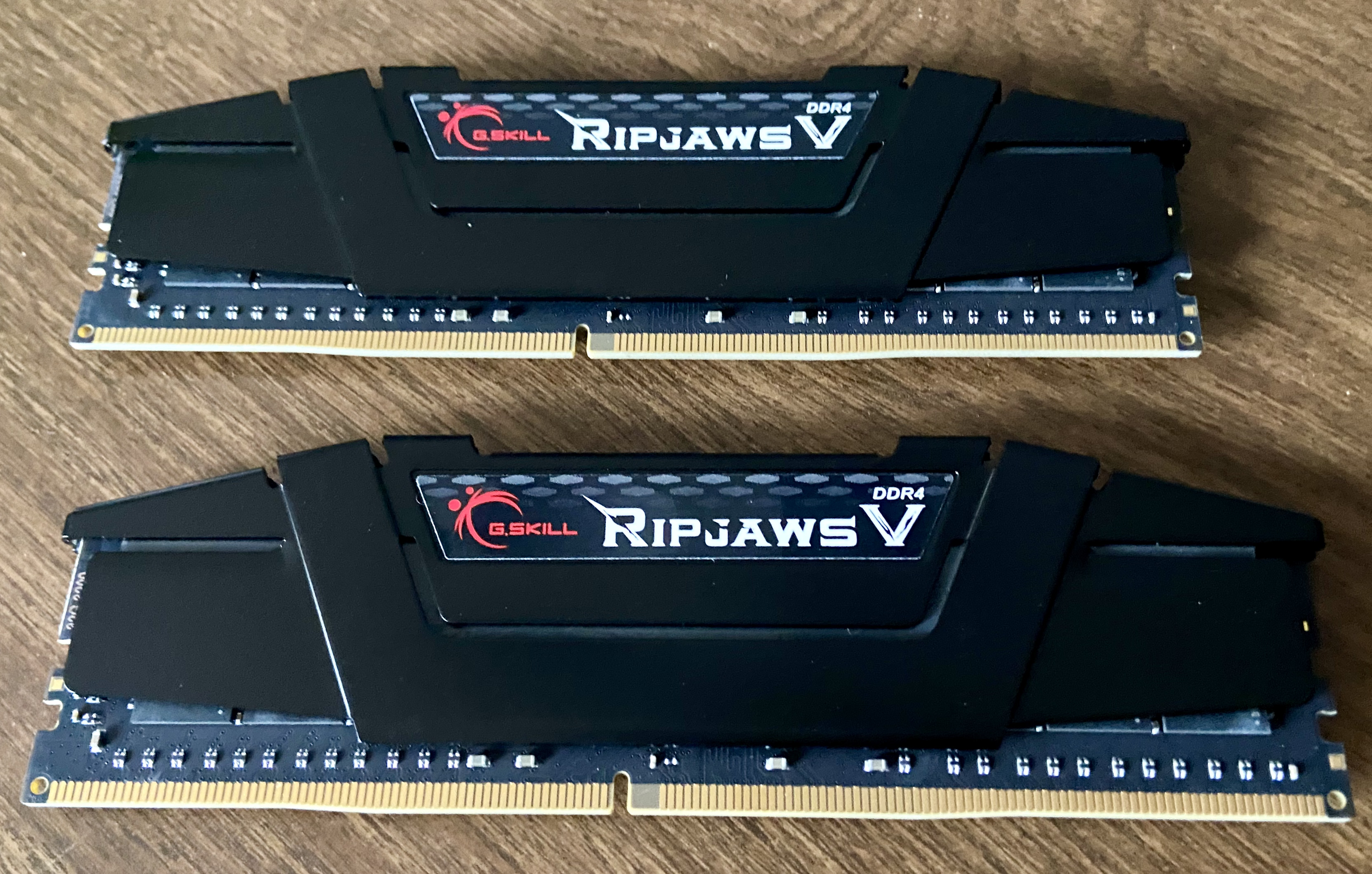 An easy upgrade I prepared for during the inital build was RAM. My motherboard had 4 slots with a max capacity of 64GB. So, I made sure to populate it with 2x16gb sticks instead of 4x8gb ones, so the capacity could be effortlessly doubled when RAM became cheaper. But, the release of Ryzen 3000 cpus changed things. Overnight, a Ryzen 3000 serries processor paired with my motherboard could support up to 128gb of RAM.

This made me wonder if I should instead fill those blank spaces with the new max dimm size sticks. The only problem was, if I wanted to upgrade RAM to the new max size, I also needed to upgrade to a newer CPU. Oh, and also buy twice the anticipated capacity of RAM.

Spoiler alert: I did also buy a new cpu. More on that below.

Eventually, I settled on a Ripjaws V 2x32GB 3200Mhz kit with 16-18-18-38 timings. There wasn’t a 2x32gb pair that matched the model of my original RAM, and but this one had all the same timings while still being cheaper than other alternatives. A total of 96GB of RAM is definitely overkill for most uses (arguably, even my own). However, I tend to run large, automated VM deployments and often use my /tmp/ dir as a large working folder, so the extra overhead is nice to have.

TLDR: I always planned to expand my RAM. Ryzen 3000 allowed an even higher max RAM capacity with my MB, but I would have to also upgrade my CPU. I upgraded both, and now have 96GB of RAM. 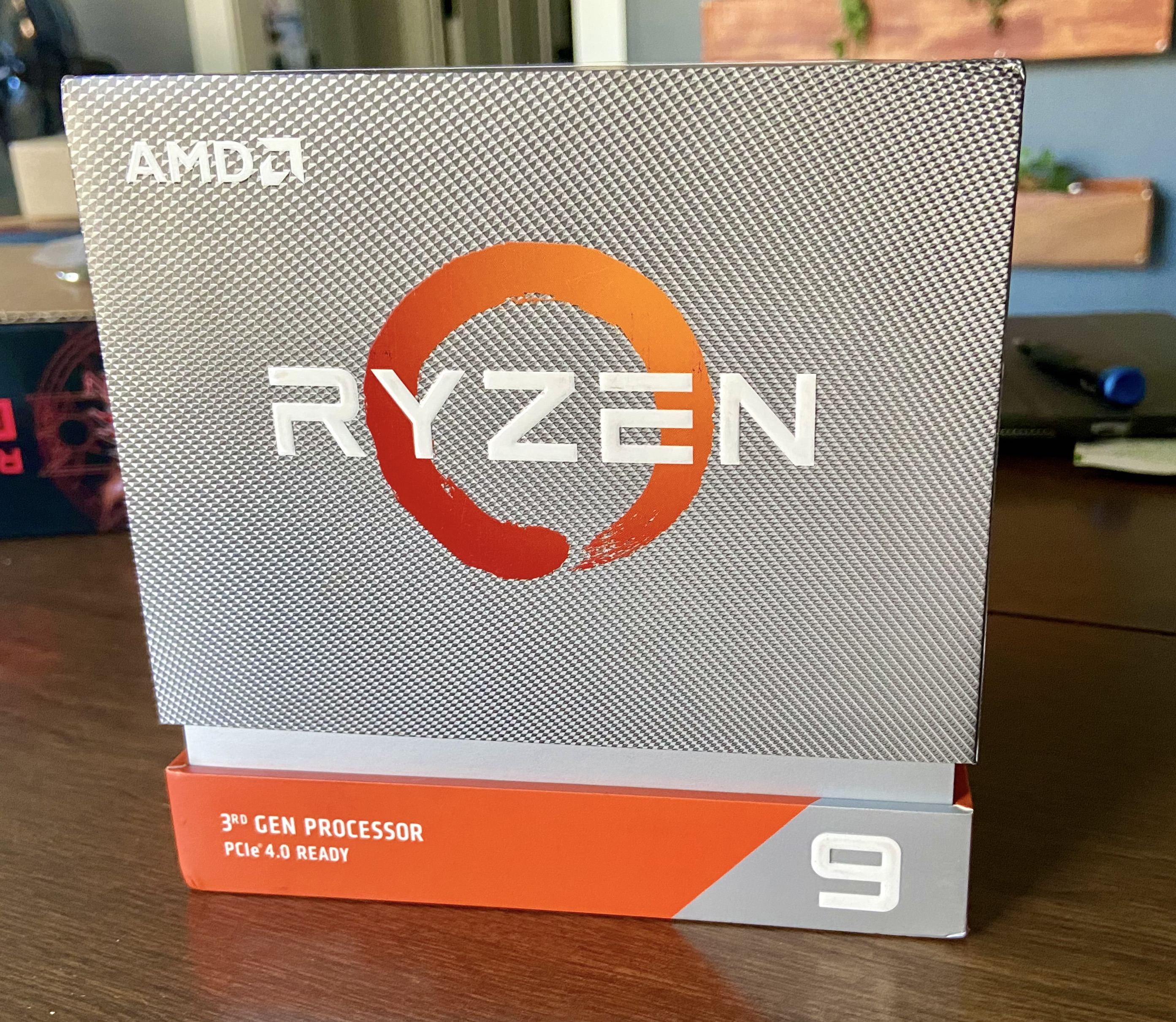 My origonal plan when I built charmeleon was to get the 2600, and later upgrade to a 8 core 2700x or a 3000 cpu that was rumored to potentially have even more cores. I made sure my motherboard had good VRMs for the cost, so it could support a future upgrade with more cores.

Months later the 3000 cpus launched, and I was set on getting a 3900x. However, I didn’t need a new cpu yet and I knew AMD was going to be releasing the “4000” cpus in the Fall. I figured I would wait until they were released, and then buy a new one, or a discounted 3000 serries one.

When the 5000 series cpus were released, I thought the 5900x would be perfect. Unfortunately, like ever other tech release of 2020, it was nearly impossible to buy one. I didn’t feel like waiting even longer, and I don’t actually need the increased performance. The new gains are particularly observed in gamming… but I’m rocking an rx580 and am clearly gpu bottlenecked anyway 😆. I can manage just fine with slower single core speeds…

With the 5900x not available anytime soon, I became tempted by some crazier options… like the 3950x. The 3950x is an amazing cpu, and honestly I’d still love to have one. However, even if I could get it on sale… I knew it would still cost a ton and I couldn’t justify the price difference. While a 16 core cpu is amazing, a 12 core still easily covers my needs. The money “saved” on the price difference could then be used to get the bigger ram upgrade I wanted.

So, I looked back at the 3900x and wondered if it would go on sale. It did occasionally, but seemed like there might start to be shortage issues with people jumping to it after not being able to get a 5900x. The next time I saw it go on sale, I snagged one just as they sold out again. I didn’t get it for the cheapest it’s ever been, but the sale was quite close to the all time low. And it was much cheaper than what it has remained at ever since.

TLDR: I planned to upgrade to a higher core count CPU. After waiting, I wanted a 5900x, but you can’t buy them. After being tempted by the 3950x, I purchased the more reasonably priced 3900x on sale. 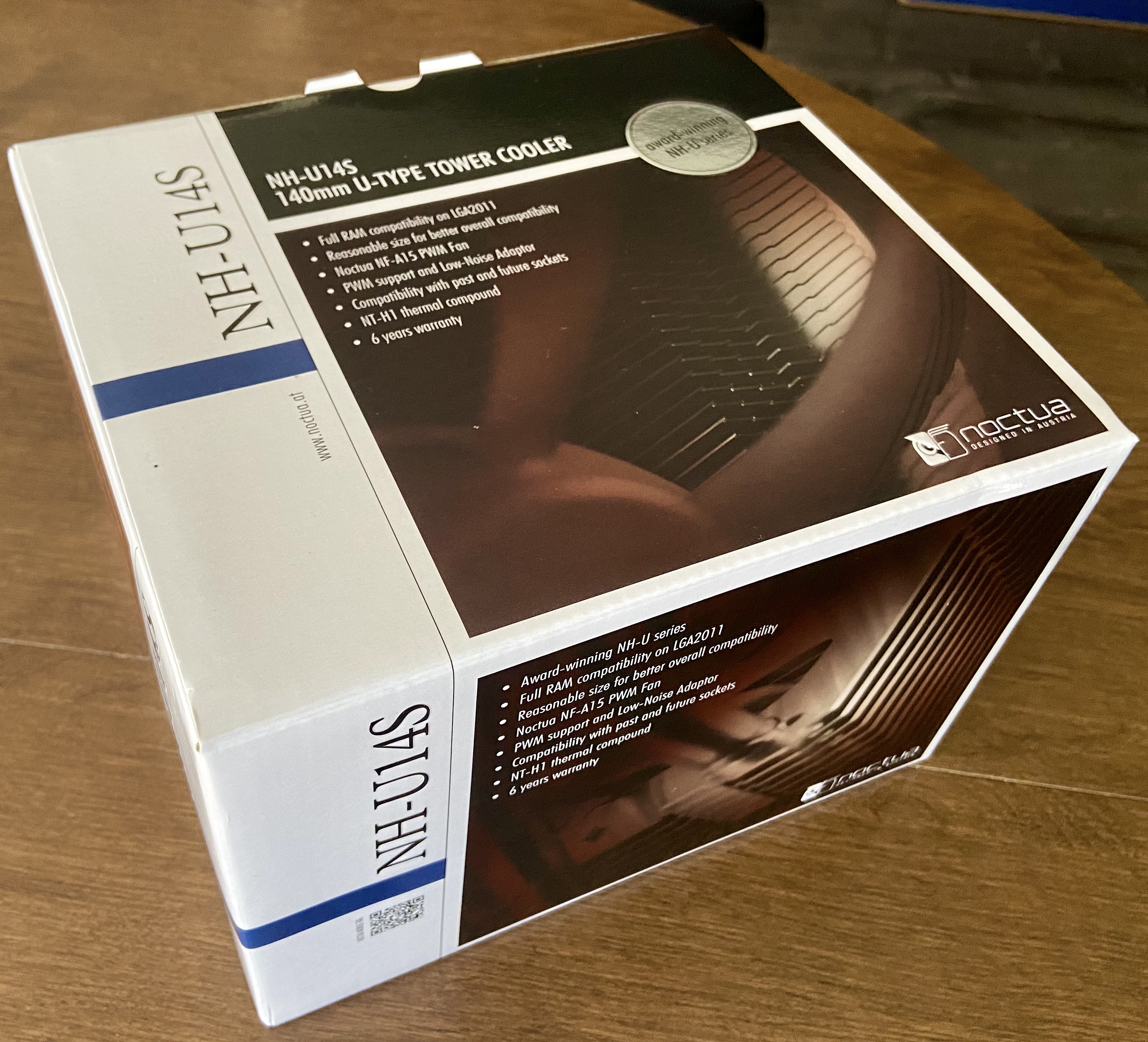 Over the summer I upgraded all the fans in my case to Noctua ones and love them. At the time, I wanted to also get a new cpu cooler to match, but with plans to upgrade my cpu soon, I figured I would wait and order both at the same time so I wouldn’t have to go through the hassel of repasting the CPU twice.

I switched what specific model I wanted once or twice, after being confused about compatibility. I didn’t want the massive NH-D15, but did want a cooler that used a 140mm fans instead of 120mm ones, because I much prefer their lower sounding “woosh”. After I confirmed it should fit in the Meshify C and with my RAM, I selected the NH-U14s.

TLDR: I wanted a new CPU Cooler with a 140mm fan. I love Noctua. 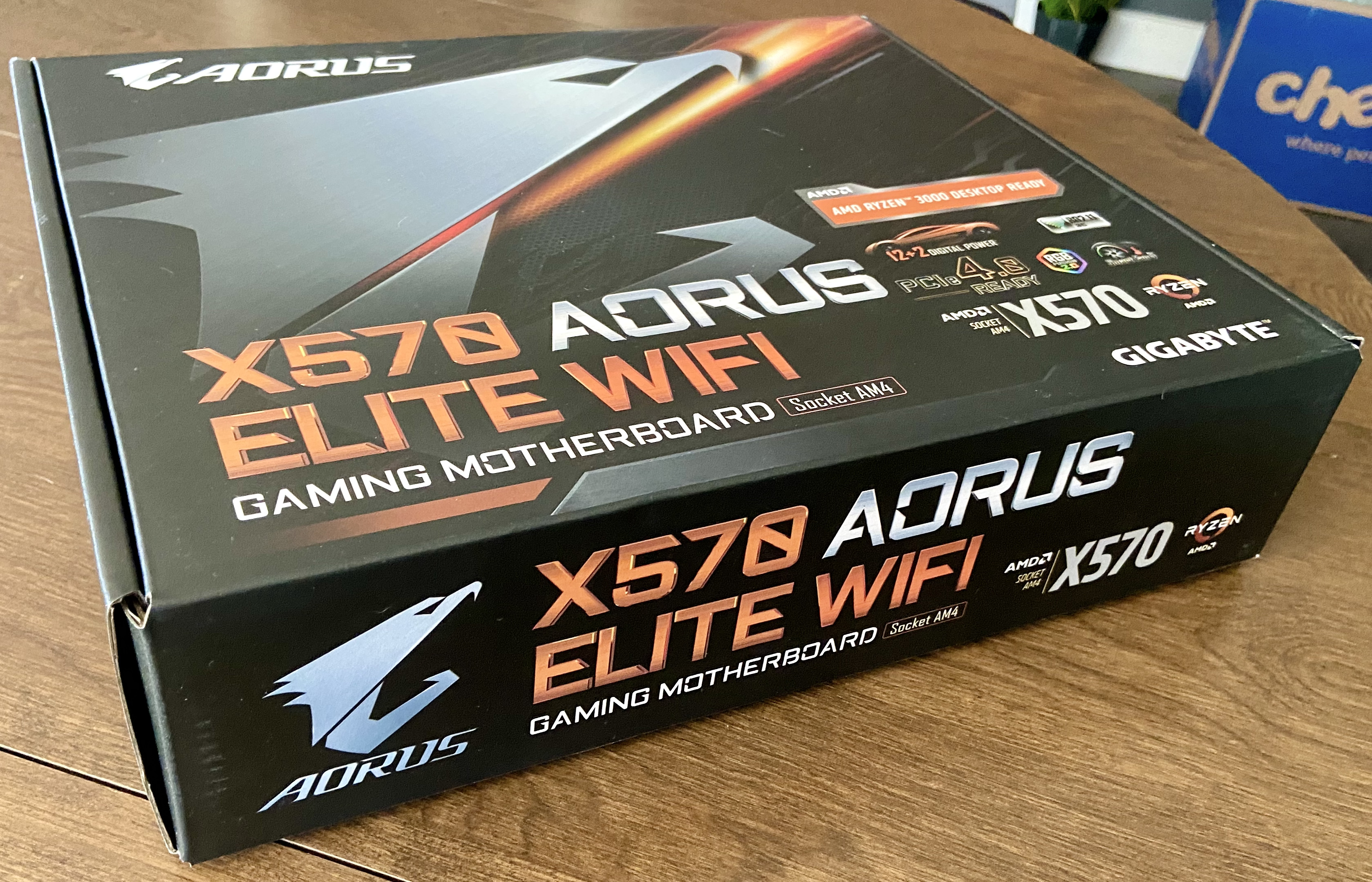 Unlike the CPU and RAM, I never intended to get a new motherboard when building Charmeleon. When I was looking at getting a 5000s cpu, I knew my B450 thomahawk wouldn’t get the required bios upgrade until January… maybe. I also knew the upgrade might not be reversable which I didn’t like, so I started to look at B550 and x570 boards.

I realized x570 fit my needs a bit better when compared to my b450, and even the new b550 (which I think most people should probably get). The x570 paired well with the other upgrades I was making. Particular features I liked compared to the b450 tomahawk were:

I looked at mother boards for months while waiting for Ryzen 5000 to officially be announced. I decided that I wanted a x570 Gigabyte Aorus board, but wasn’t sure which one. The Aorus Master seemed to be one of the defacto recommend boards for VFIO builds, but it was very expensive. Much of what made it so good however for iommu seemed to still be present in the cheaper Aorus models. In particular, the Aorus boards had great iommu groupings and support, and a bios feature that allows you select which x16 slot to use for the primary gpu. This makes it easier to boot into a secondary gpu, saving the beefier one to pass through to VMs.

I went back and forth trying to decide between the elite wifi, pro, ultra… and sometimes even the master, for weeks. When I started making purchases, the elite wifi went on sale and I decided to grab it. It had everything I needed, and most of the upgraded features on the other boards I either wouldn’t use or were just small nice to haves.

TLDR: Looking at Ryzen 5000 CPUs had me looking at newer motherboards. Even after dropping back down to a 3000 CPU, I still wanted a motherboard upgrade for better VFIO support and expandability. 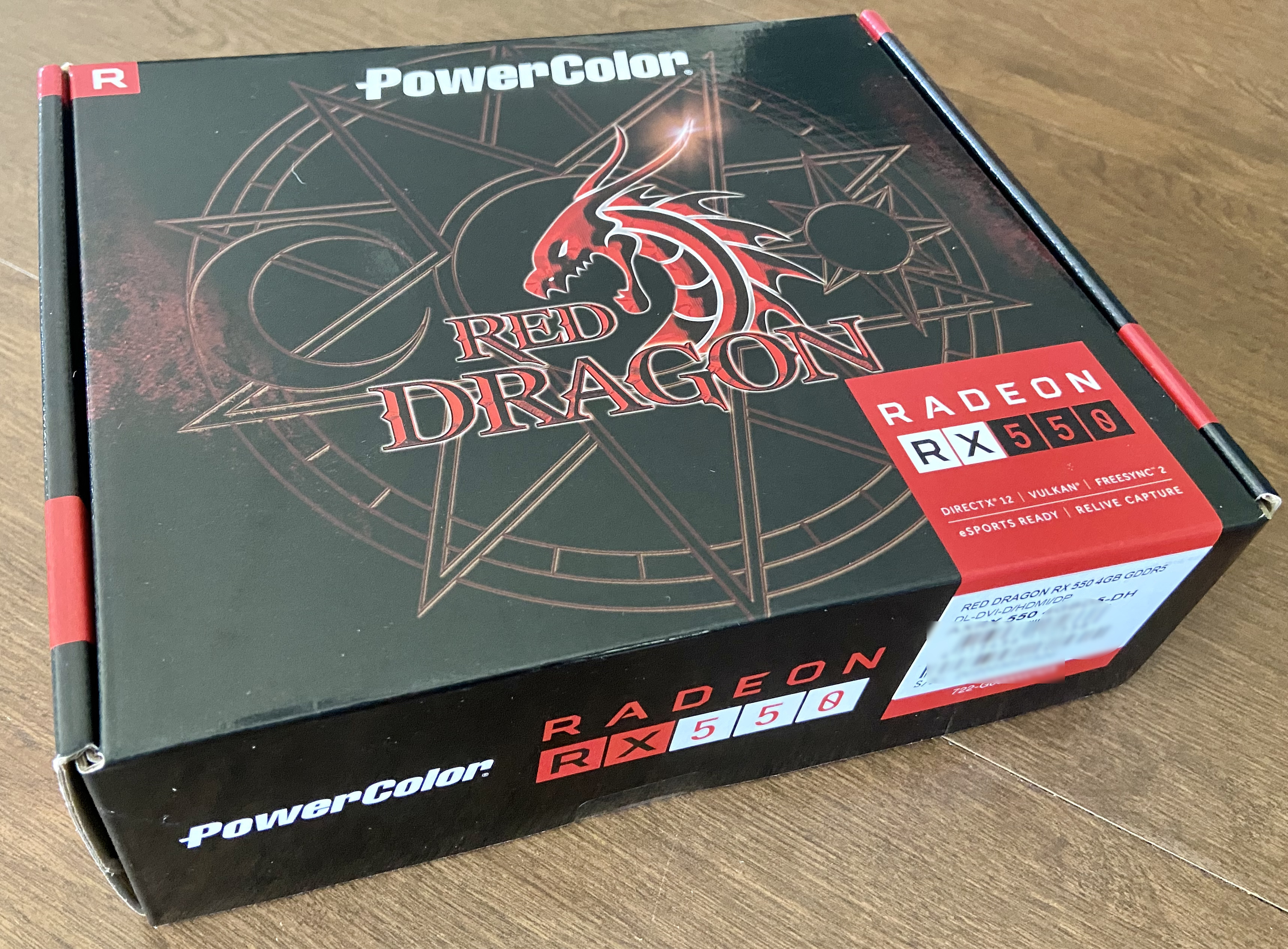 With a motherboard that better supported vfio passthrough, I wanted to get a smaller gpu that I could use for host machine’s graphics. I read that the rx550 and 1030gt were both good, sub $100 gpus often used for the host.

I wasn’t thrilled about using a nvida gpu on a linux host, but I loved how small it was (although that could translate more fan moise). In comparison, the 550 seemed to be slightly more powerful, was amd, and well rated. In fact, I had read several gpu passthrough guides using the rx550 and passing through a rx580 (my current gpu). I purchased the 550.

TLDR: I wanted an easier time with VFIO GPU passthrough. Having a second card for the host or a second VM makes this easier. The rx550 is a common card for this use. Overall, I am extremely happy with my selections. It’s surreal how powerful of a machine can be built with a modest budget these days. With the upgrades, Charmelon’s specs now stand at:

Not only have these changes drastically improved the performance of my workstation, but they have allowed me to run virtual machines at the next level. When passing hardware directly to my VMs, I cannot tell that the computer I’m sitting at is virtualized. I have been living inside Vms, and I love it.

That’s it! I still want to get a second nvme sdd, but other than that I think upgrades to Charmeleon will slow down for a bit…