In my previous post, I discussed how I sold off my System76 Bonobo laptop, and planned to replace it with a new computer. Well, I did… awhile ago. For the last few months, I have been using a Lenovo T470 Thinkpad (with dock) as my new daily driver. Here are my thoughts. 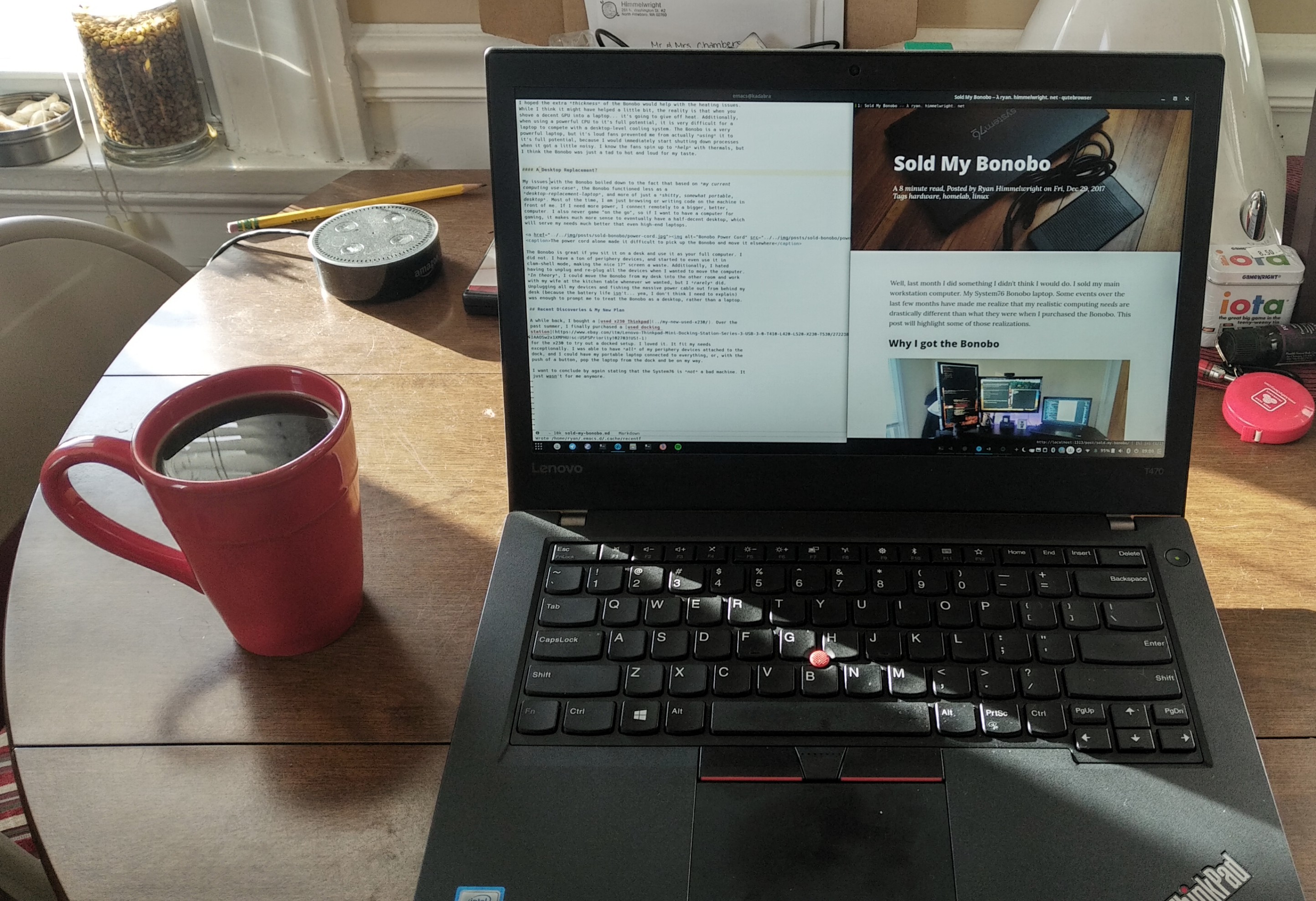 My T470 on a Sunday morning

The T470 is the 14” model of Lenovo’s “business” laptop lineup. The T470 series actually has several variants itself, including the “high end” T470s, that has a slimmer chassis, made from “higher quality materials”, and a better screen compared to the T470. There is also the “high performance”T470p, which features a faster, quad-core CPU, but a slightly larger chassis. While these variants caught my attention, I ultimately decided on the normal T470. This was partially because I could max the T470 out at 32GBs of RAM (The T470s can only hit 24GB due to one of the sticks being soldered in), but mostly because I assumed that the combination of having a lower powered CPU (compared to the T70p), but a slightly larger case (compared to the T480s) would make it the optimal choice concerning my heat/noise concerns outlined in the previous post. 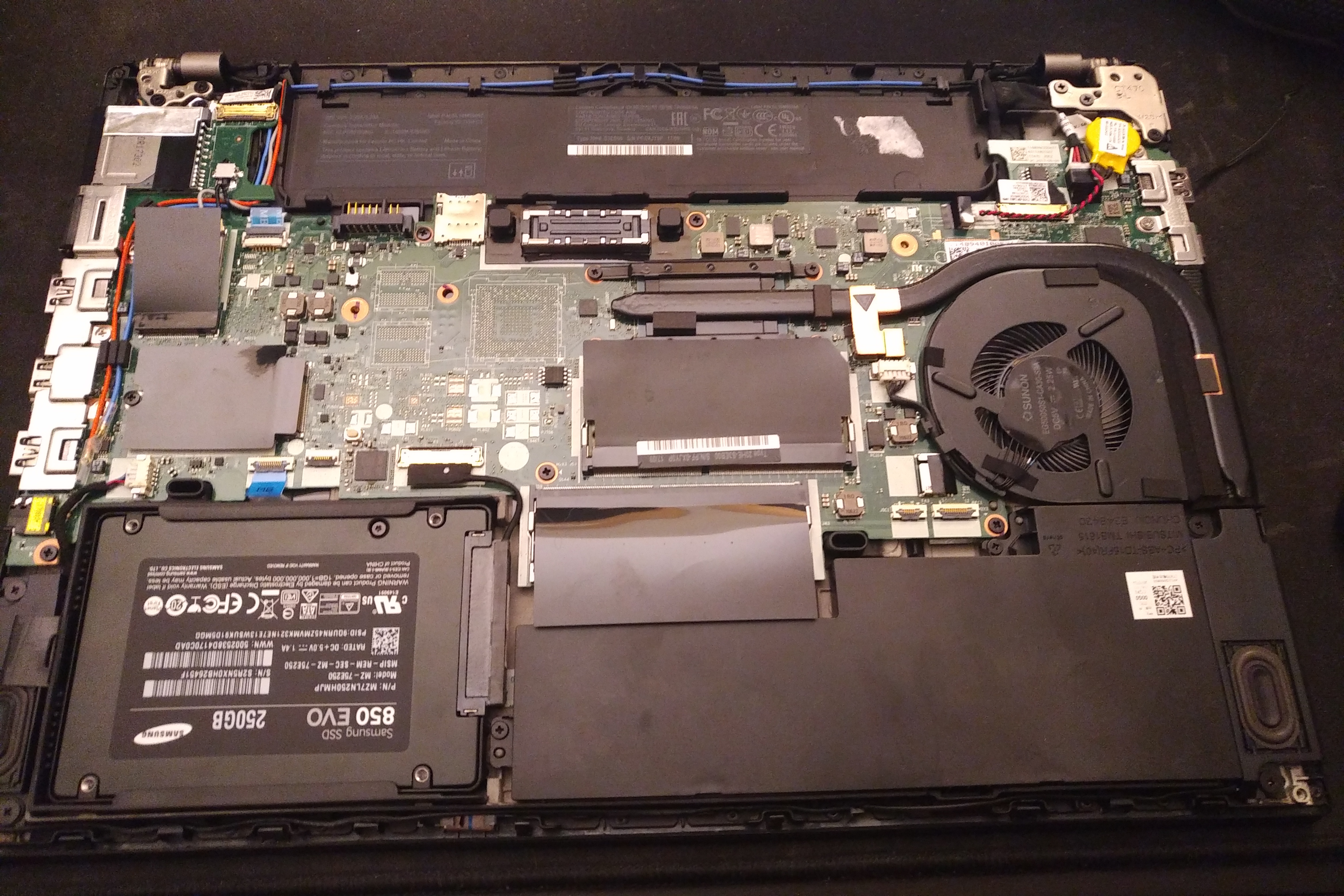 I got my T470 from a vendor on Ebay. It came configured with a 2.5GHz (3.1 GHz Turbo) i5-7200u cpu, 8 GBs of DDR4 RAM, a 14” 1920x1080 screen, and a 500GB Hard Drive with Windows 10 on it. After checking that it booted up fine, I immediately swapped the slow HD with the 250GB SSD that was in my x230, and installed Solus on it. In Solus, everything worked “out of the box”, and I would guess other Linux distributions would as well. For Christmas, I got a new 500GB Samsung EVO SSD to upgrade the 250GB one. In total, the T470 has less total storage than the Bonobo had, but all of it is fast SSD storage. I am getting better at using my server for network storage anyway, so it all works out . 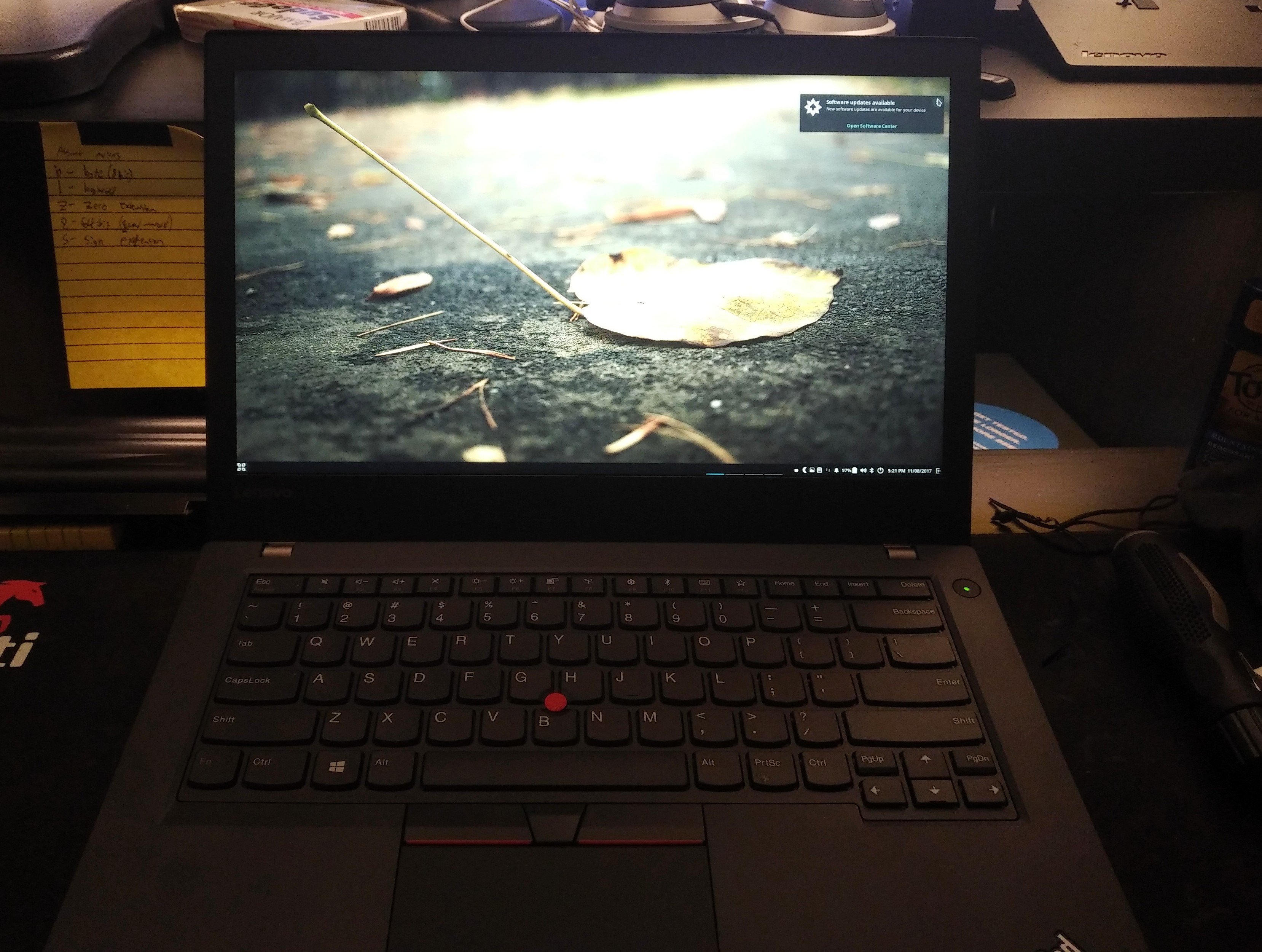 While I still plan to upgrade the T470 in the future, here are it’s specs at the time of writing this post:

The hardware on the T470 is nice, and the technical specs are okay, but the real killer feature of switching to a Thinkpad for my main computer is that I also purchased the ThinkPad Ultra Dock (40A2). This means that I am able to easily take advantage of my periphery devices whenever I am working at my desk. 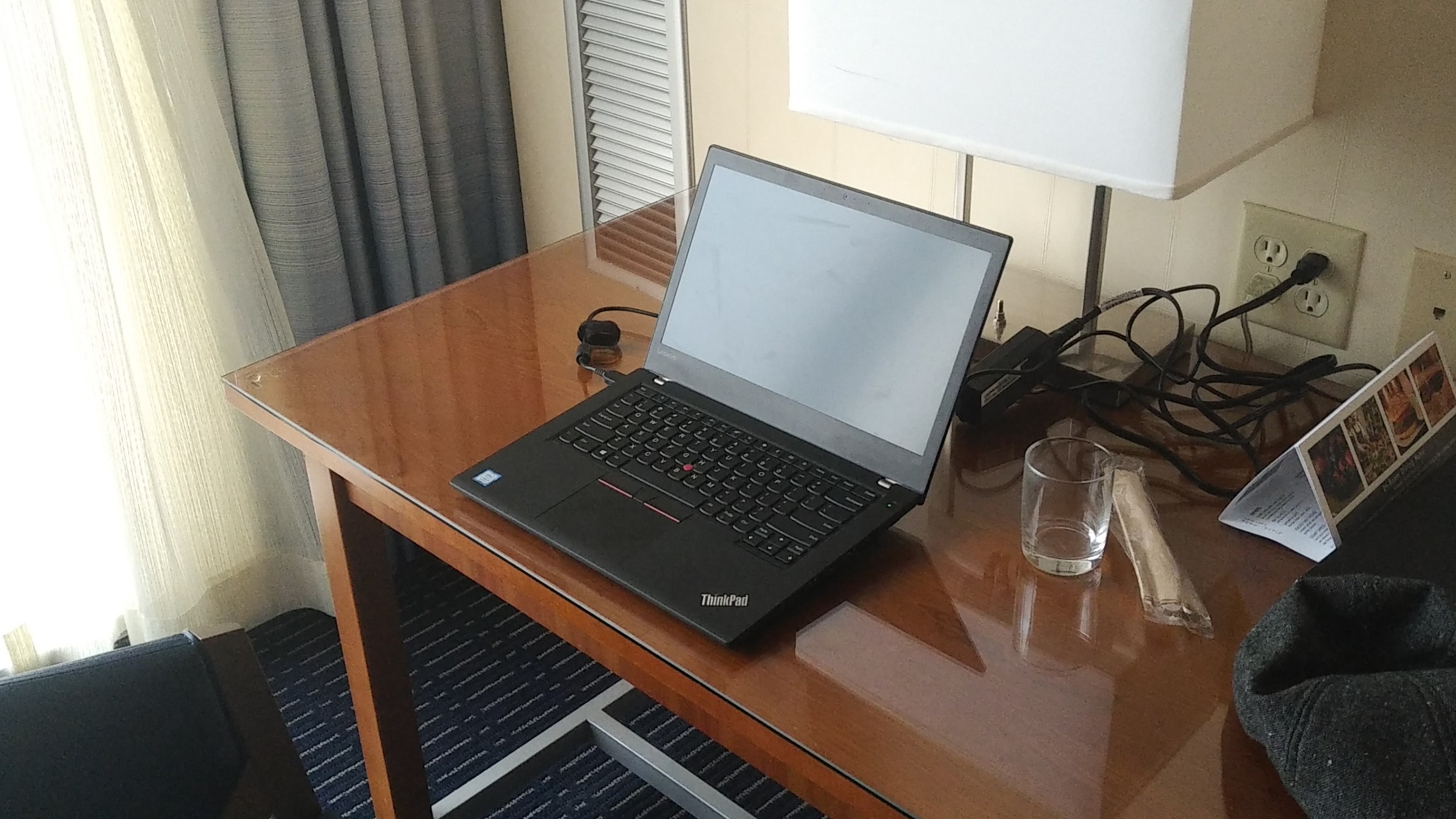 I’ve enjoyed the portability and great keyboard of the T470

While I overall love the T470, there are a few things I’m not thrilled about. 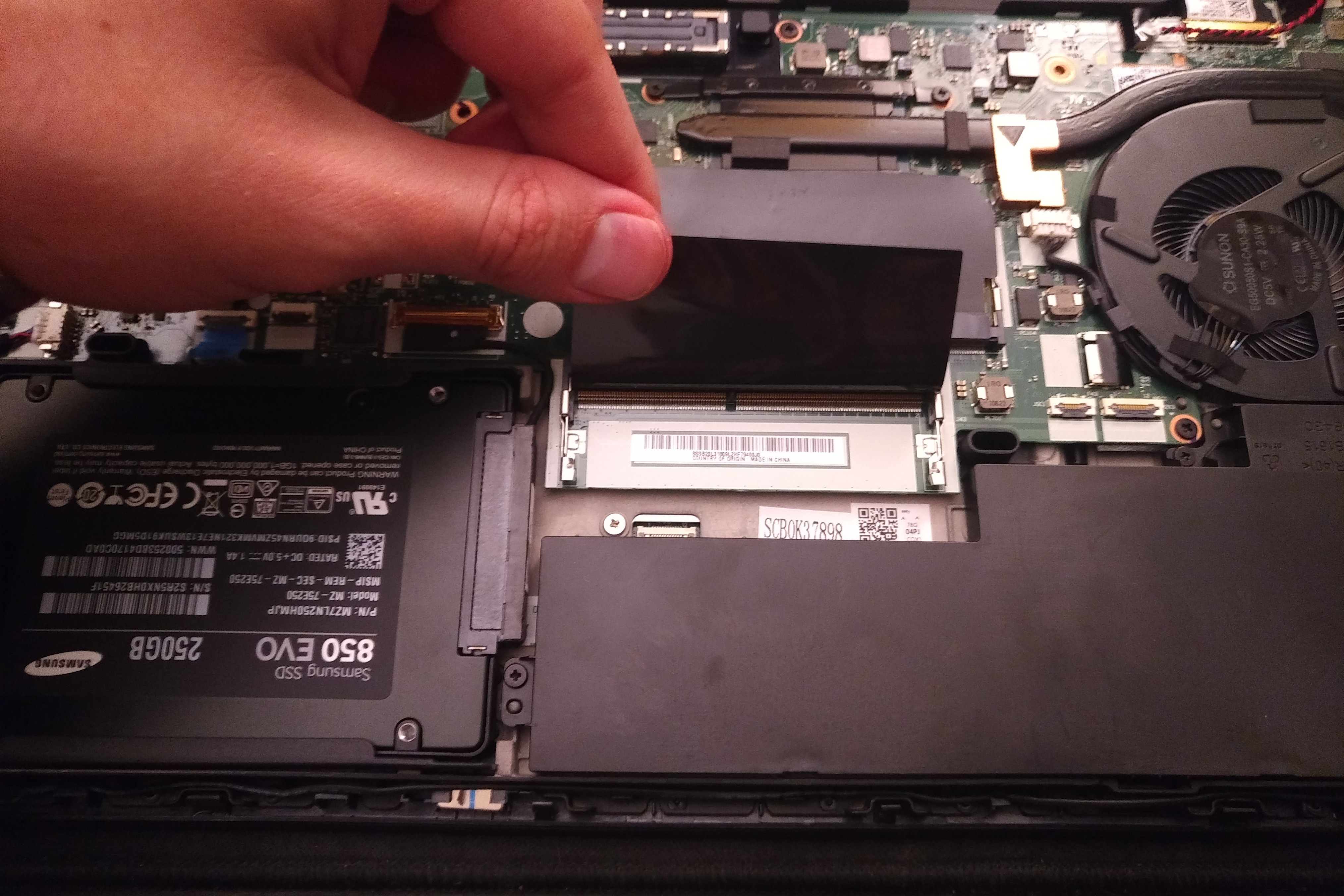 Overall, I have been very happy with the T470 as my main computer. I’d still like to upgrade the RAM at some point, and I have entertained the idea of trying an eGPU setup… I might eventually build a new desktop, but even then, I would likely have it headless, running VMs and connect to it remotely from the T470 (except for occasional gaming). That being said, right now, the T470 is working great as is!