Several weeks ago I wrote about scripting a tmux session’s initialization. At the end of the post I mentioned that while writing it, I had learned about tmuxinator. I even teased that it looked so good, I may switch to it eventually. Well… that didn’t take long. I’ve scrapped my tmux shell scripts, and have converted to using tmuxinator. Here’s how.

Tmuxinator is a command line application that makes it easy to create and manage tmux sessions. It allows a user to define how to setup a session, including naming windows, splitting panes, and what commands initially run in each pane. The configuration is done in yaml, so it is very easy to figure out and get started.

Most distros probably have tmuxinator in their offical repos. These days, I mostly run Fedora on all of my machines and I was able to find it there:

However, I found that this version was quite out of date (0.6.11) even on my new Fedora 30 install, so I recommend using the method stated on the project’s Github page (requires rubygems) to install a much more current version (1.1.0):

This will open up a new tmuxinator template inside your default editor. The default template contains a bunch of comments that help guide how to configure it.

The first thing to set at the top of the template is the name field, followed by the root directory. The tmux session name is defined with name, and root will be the directory which all of the windows/panes open up in by default. For example, when converting my website script, I set name to Website and root to the location where I keep my website’s git working directory, ~/Documents/himmAllRight-source:

Next, I needed to configure my windows. To convert the script from my previous post, I wanted a dedicated ‘Main’ window, one for the server, one for vim, and one for an extra shell. Additionally, since that last post I’ve added a window that launches my hugo-served website in a web browser. To recreate all of that with tmuxinator:

Done. Save the file and that’s it! See the benefit of using tmuxinator??

While I don’t use them in this example configuration, it should be noted that setting up pane splits is also quite easy with tmuxinator. For example, if I wanted to split the server window into two panes, one running the hugo server and one running htop, I could use:

The layout key defines which tmux layout to use when splitting the panes, and panes is a list that defines what to run in each pane. 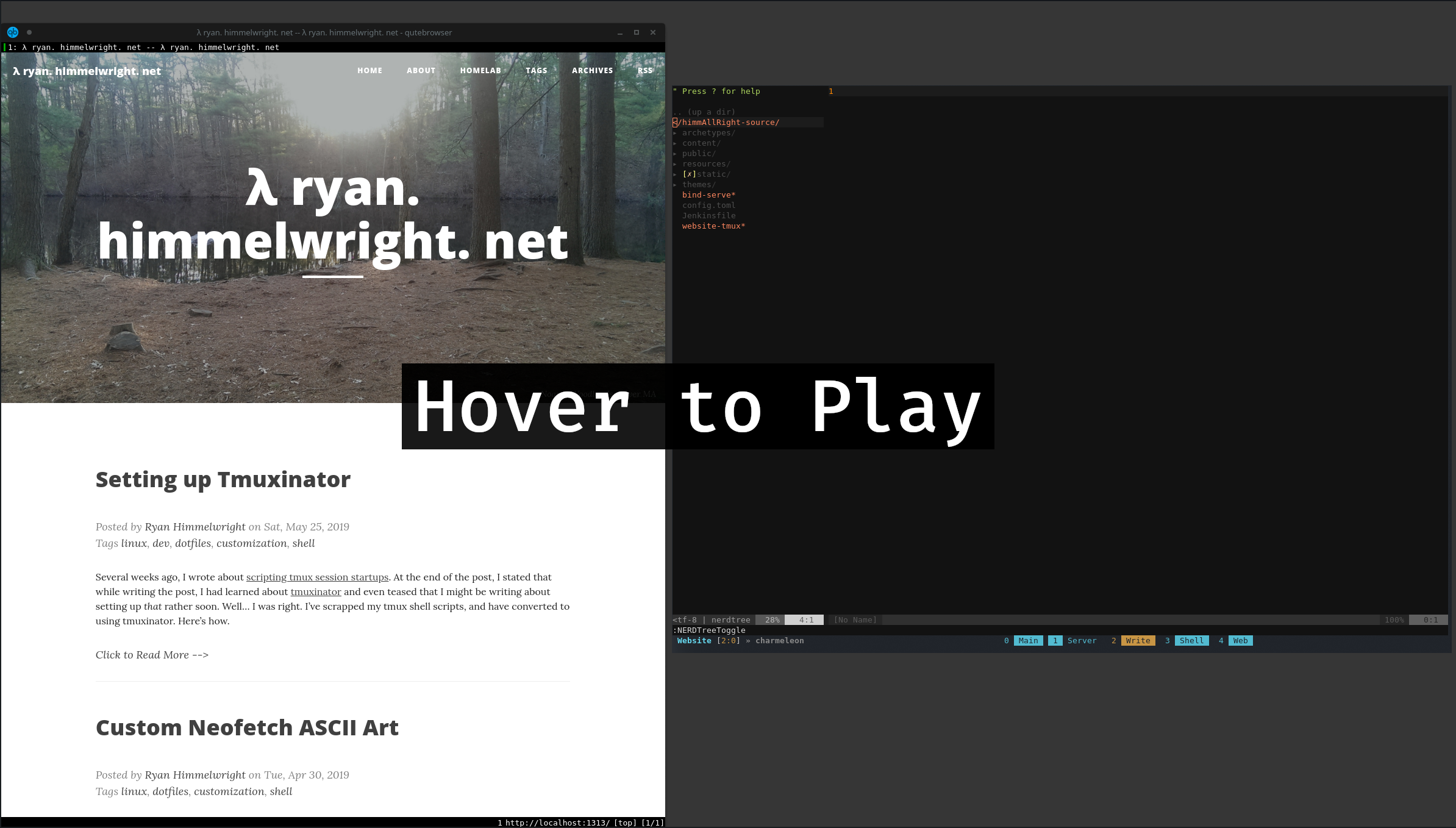 To start up the newly defined tmuxinator project, use tmuxinator start:

All of the tmuxinator profile templates are stored at ~/.config/tmuxinator, which means they can easily be copied to a new machine, or even saved/maintained in source control.

Note: I think older versions stored them at ~/.tmuxinator/, so check there if they are missing.

That’s it. While scripting my own method was a good bash exercise and helped me learn the details of tmux a little bit better, I ultimately think that tmuxinator is the way to go. This is especially true when using tmux to work on several projects or even across multiple machines. If you still haven’t tried tmux… I highly recommend checking it out!